Norma, you've got the biggest mouth in this mill! 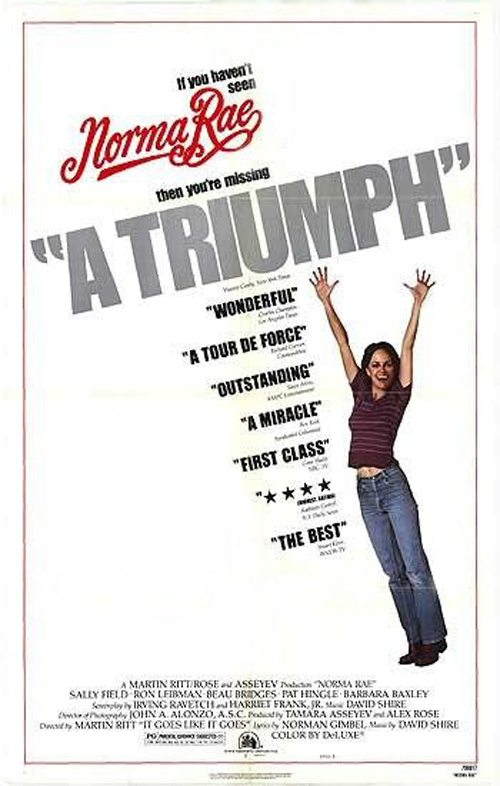 (SPOILERS) What a dreary cartload of issue-led laboriousness. Worthy subjects may make for worthy movies (or they may not), but there’s absolutely no guarantee they’ll make interesting ones. And when you attach Martin Ritt to them (post-‘60s, at any rate), you’re almost guaranteed a comatose result. Norma Rae is one of those pictures that would be entirely, rather than just mostly, forgotten, if it wasn’t for it bagging Sally Field an Oscar for playing the title character. And it isn’t even that “You really like me!” Oscar either.

If you want to make starchy political subject matter riveting, give Warren Beatty a call.  This, though, telling of the unionisation of a cotton mill in a North Carolina town, has earnestness up the wazoo, and feels slightly patronising to boot, as Norma charts an Eliza Doolittle course of becoming socio-politically aware while weighed down with a good, simple southern girl accent that would set her in fine stead for playing Forrest Gump’s mom a decade and a half later.

Everything surrounding Norma’s rise reeks of stolid cliché, from the uncompromising organiser (Ron Leibman) to the kindly-but-straightforward beau (Beau Bridges). It’s easy to rag on about simplistic Hollywood formulas, but for all the drama this elicits it could almost have done with an infusion of that Jerry Bruckheimer spirit (since the standard response to those suggesting this kind of picture is a wee bit lacking is to go and watch a Michael Bay movie, on the shortly to be deceased imdb comments boards at least), or a touch of Taylor Hackford in An Officer and a Gentleman mode. Anything to snap it out of its somnambulant self-importance.

Very occasionally, Norma Rae threatens to become interesting (it seems to be inching towards suggesting over-protective dad Pat Hingle is over- other things too, but then decides to forget about it). Field would go on to make two more movies with Ritt no one remembers, and we’re now at a point where no one quite remembers why they really liked her either. Just being based on a true story (of Crystal Lee Sutton) doesn’t automatically warrant respect, and as far as tales of undaunted activism in the face of oppressive bosses and hazardous working conditions go, Silkwood a few years later is vastly superior, right down to Meryl dousing herself in blue collar intonations.