I’ve had enough of this 2012 Alamo bullshit. 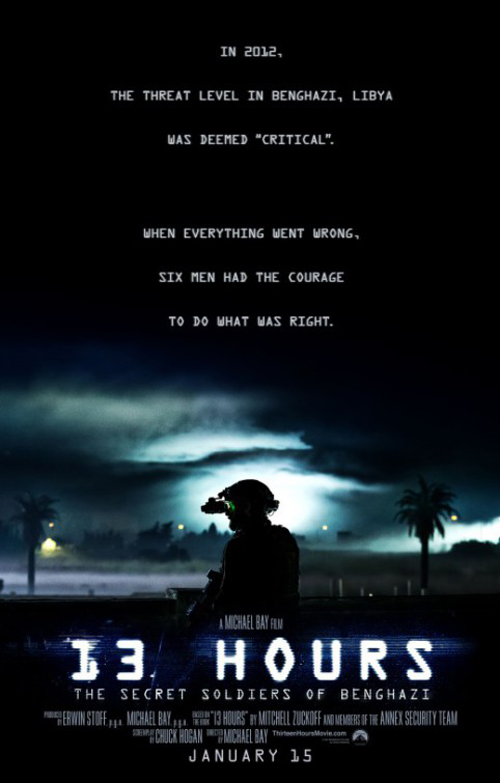 (SPOILERS) Not The Secret Private Military Contractors of Benghazi, as that might sound dubious in some way, and we wouldn’t anything to undermine their straight-shooting heroism. That, and interrogating the politics of the US presence in Libya, official and unofficial, and involvement in the downfall of Gaddafi (Adam Curtis provides some solid nuggets in his rather sprawling HyperNormalisation), is the furthest thing from Michael Bay’s mind. Indeed, it’s a shame 13 Hours: The Secret Soldiers of Benghazi bears the burden of being a tale based on (murky and disputed) facts, as it’s Bay’s most proficient piece of filmmaking in some time.

So, you’re not going to find out what the CIA was actually up to in their Benghazi base (most likely, the dodgiest conclusion you can reach will be the right one). You’ll only be informed that a brave team of ex-military types were there to protect them, and stepped up to the plate, just as soon as they got the go ahead (or before) when the going got bad, but too late for the US Ambassador. There’s no finger pointing at Hillary Clinton – I don’t even recall her name being mentioned – and the only references to the status of Libya come in terms of its deposed leader’s “tyrannical rule” (of whom, he “might have been an evil asshole, but he wasn’t stupid”): nothing about the culpability of those who brought the country to chaos and ruin. But then, you’d be shocked and aghast if such things were revealed in a cinematic exploration by one Michael of Bay, he who related the definitive telling of the US entrance into WWII that was Pearl Harbor.

Heroes, family men: quite simply, thoroughly decent eggs who are looking forward to getting home to see their precious wee bairns. Why, John Krasinski plays one of them (not a precious wee bairn, although he may as well be), absurdly so, since despite some ridiculously-toned abs, he only ever looks entirely miscast (he probably wanted some of buddy Matt Damon’s action cred). On the other hand, James Badge Dale, and particularly Pablo Schreiber, bring their A-games, and whatever dramatic integrity this has going for it is predominately down to them (the latter’s thorough confusion as to who may be friend or foe is very amusing, and wholly believable).

Certainly, while Bay martials the mayhem and explosions with profound technical skill, a gritty, sensitively-nuanced telling this is not. It’s always entirely evident that this is the same director that brought us Bad Boys 2, from the staging and slow motion to the musical cues, triumphant emotionalism and rousing derring do (and the propulsive car chase). This isn’t, basically, a million miles from Rambo: First Blood Part II when it comes to professing to pay respect to those in the armed forces, just with a director who isn’t George Pan Cosmatos and even more irresponsible since it purports to be factual. I suppose you could say, in its favour, that unlike Zero Dark Thirty, no one is going to foolishly mistake 13 Hours for being realistic. When one of the characters comments, “He died in a place he didn’t need to be in a battle he didn’t understand In a country that meant nothing to him” you could substitute “Bay directed a movie” for the first two words and have a fairly accurate description of the content.

He even has the temerity (or rather, screenwriter Chuck Hogan does) to have one of the leads instruct faithful interpreter Amahl (Peyman Moaadi, the only personified Libyan in the picture), “Your country’s got to figure this shit out”. Yes… Still, Bay ensures the gung-ho spirit lives on in his characters, who read Joseph Campbell – I wonder if Bay ever has – aloud (“All the Gods, All the Heavens, All the Hells are within you”), who mouth banalities (“It’s been fun, right?”) and who announce, manfully, “I walked into this country. I’m walking out”. Which is still better than Alexia Barlier’s token female, who gets to continually ask “How can I help?”) Bay may be a more technically proficient director than an unending stream of Transformers movies would warrant, but if this is what he turns himself to on his days off, he’d best stick to that particular sandpit. Safer for everyone.