I used to be dead, but then he brought me back to life. 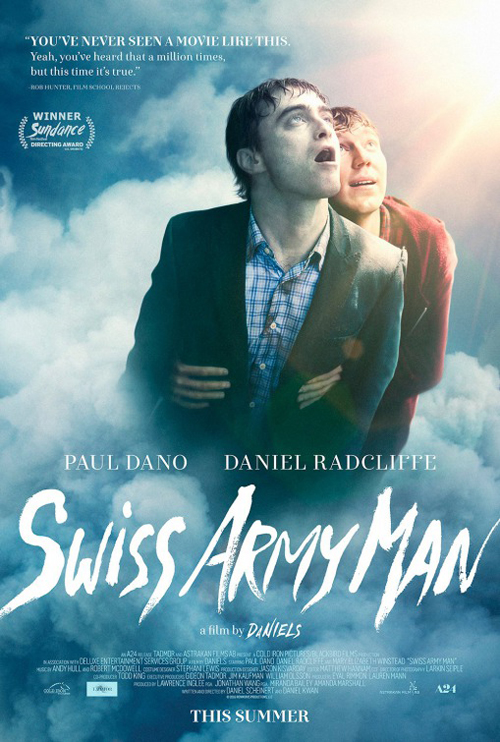 (SPOILERS) Sometimes I’ll finish watching a movie entirely bewildered by the praise it somehow merited. Spring Breakers was one notable case. Swiss Army Man is another. I’ll readily admit that music video turned feature directors Daniel Scheinert and Daniel Kwan are incredibly inventive and talented – as writers not so much – and that Daniel Radcliffe’s performance as a corpse shows range I never knew he had (I mean that both ironically and seriously).  Otherwise, the experience felt like being harangued by a blowhard hipster for 90 minutes, one who thinks he has something desperately, insightfully deep to say but is actually running on empty after five. It isn’t even all that appealing if you love fart jokes: any given Austin Powers is far more flatulently fulfilling.

I was tempted to label Swiss Army Man a one-joke movie, so impressed with its own single-plane weirdness that it irons itself out into something not really very weird or compelling at all. Which would be unfair to its serious undertones. Yet those serious undertones in no way retrospectively justify the banality of having to endure Paul Dano (as Hank Thompson), never the most endearing of performers (some would say punchable, but let’s not be too hasty), effectively talking to himself for – yes, I’ll mention how long this lasts again – 90 minutes. And mostly about farting and masturbation. Swiss Army Man’s a movie consumed with bodily functions and the eccentric (imagined) ability of Radcliffe’s cadaver (“Manny”) to come to Hank’s rescue at the unlikeliest moments, until it’s not.

Then – much, much too late – it becomes a movie refocussing on the suicidal circumstances in which we first met Hank, mentally ill and obsessed with a young mother in his neighbourhood (Mary Elizabeth Winstead). She is understandably aghast when he shows up in her backyard and his secret is revealed (this sequence also involves an erection gag in front of her daughter, always a great source of hilarity). Winstead’s performance is so tonally sensitive and insightful to Hank’s warped reality, I was very nearly willing to flip into seeing the picture in a retrospectively more rewarding light. Instead, we quickly revert to an “objective” scene in which Manny speeds off on a new fart-powered journey (as Winstead observes, “What the fuck?”)

There were clues from the beginning – besides the talking corpse, and a genuinely funny moment where Hank discovers to his amazement that he can use Manny as a flatulence-powered speedboat – that something was amiss, in that somehow, he has apparently been marooned on a desert island but his mobile phone battery hasn’t run out (even turning it off, it would eventually drain of power). But to engage with the reveal is to credit the preceding material, which plays like a fourteen-year-old’s idea of existential angst. There’s no profundity to Hank’s ruminations on life, sex, love and death, interspersed with moments of squirrel murder via Manny’s bazooka mouth or scaring off a rampaging bear by setting himself alight.

The directors have gone to great lengths and abundantly creative effort to bring to life Hank’s fantasy world, composed of litter and forest debris, but the substance is consistently tiresome. No, I didn’t find Hank’s self-delusional, make-believe relationship with Manny affecting, moving, insightful or joyous. I found it irksome and tedious. I’ve seen reviews comparing the directors’ style to Michel Gondry’s, which is actually a good call; working with others’ scripts, Gondry’s work has been sometimes extraordinary. Playing in his own self-penned sandbox, he has been consistently insufferable.

So Dano is Dano, but Radcliffe’s a different matter. For the first time that I can recall – certainly in terms of his transition as an adult actor – I wasn’t conscious of Radcliffe doing his over-delivered, over-eager Radcliffe thing. Perhaps it’s the voice, perhaps it’s just good direction, but he’s a world away from Now You See Me 2 here, suggesting there may be hope for the ex-Potter yet.

I’d sooner rewatch Weekend at Bernie’s any day than Swiss Army Man again. At least that picture had no pretensions to depth (on the other hand, Mr Profound himself, Shane Carruth, must have seen something in it, since he cameos as a coroner). The score by Andy Hull and Robert McDowell is magnificently uplifting, and Larkin Seiple’s cinematography is similarly vibrant and inventive, but to no avail. If you’re feeling particularly masochistic, you might undergo a Dano double bill with this and Ruby Sparks, another picture indulging his apparent obsession with updating crummy ‘80s Andrew McCarthy movies via an indie twist (that one being Mannequin). Although, Ruby Sparks is actually quite watchable; it’s the Dano factor that will have you squirming.