This planet is a game reserve, and we’re the game. 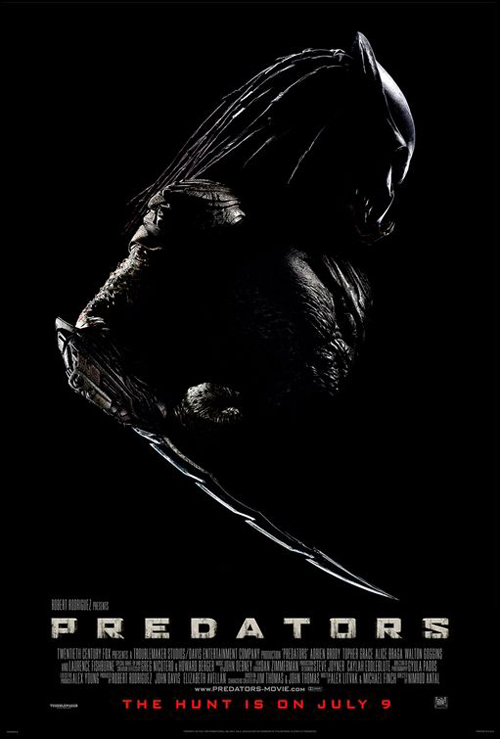 (SPOILERS) By the time this belated Predator 3 arrived, anything that treated either of Fox’s monster franchises with a modicum of decorum was to be embraced, so Predators, overly indebted to John McTiernan’s original as it is, is not exactly a breath of fresh air but nevertheless agreeably serviceable. You might have hoped for something more innovative after 23 years in the standalone wilderness, but at least you didn’t get Alien vs. Predator: Reheated.

Of course, this is essentially Robert Rodriguez’ 1994 screenplay spruced up a slightly, and as such displays the kind of slipshod approach to narrative that has served the writer-director-producer-auteur-in-his-own-bedroom’s cottage industry reasonably well over the past couple of decades .We’re mercifully fortunate he didn’t choose to make it himself (it’s only recently, with Alita: Battle Angel and the Escape from New York remake, that he appears to have been lured back to studio fare, and perhaps some degree of diligence), and his selection of Nimrod Atal, at least, ensures the picture looks good and moves along at a clip.

The screenplay, though… It’s essentially a hodgepodge, greatest hits package of Alien and Predator characters and tropes. The solitary innovation, that this rag-tag bunch of killers have been transported to an alien planet the Predators reserve for hunting them down, isn’t so bad in itself until you get down to brass tacks like… How does the selection process work? Did the Predators go to an intergalactic talent agency? Or do they hang out at prisons, taking notes of potential prey before breaking in and breaking them out? And, while it’s nice that Rodriguez is respectful enough of McTiernan’s work to overtly reference the events of Predator, in particular via Alice Braga, mimicking whole scenes and characters isn’t so commendable (Louis Ozawa Changchien confronting the Predator with a katana, à la Billy with his machete, Brody covering himself in mud and quoting Arnie’s Dutch – and, on the subject of mud, it’s pretty dumb that, knowing the Predators can’t see through such a screen, everyone doesn’t instantly get caked up). On such debits side, though, it’s nice that John Debney’s score is virtually a reprint of Alan Silvestri’s. Cos the original has a great score.

Apparently, Walter Goggins’ character was initially quite similar to Hudson in Aliens; here he comes out closer to a typical Goggins redneck. Topher Grace, meanwhile, takes advantage of post-Eddie Brock duplicity in playing a doctor-serial killer by way of Paul Reiser’s Aliens white collar sociopath. The unlikely casting of Adrien Brody doesn’t lead to disastrous results the way it did with Danny Glover in Predator 2, but he’s nevertheless an odd fit, all buffed up and adopting a Bat-Bale throat lozenge deficit. Brody’s a good actor, so keeps viewer dissonance in check, but the sense of miscasting never quite goes away; it’s refreshing, nevertheless, to have a main character so unrepentantly lacking in sentiment about making survival-first choices.

Braga, despite being saddled with the contrasting conscience (and thus inevitably breaking down Brody’s) also makes a strong impression; everyone here’s well placed for a memorable instance or two (although Larry Fishburne, showing up as a very well-fed survivor, is on autopilot), as much as the determined lack of ambition can afford.

Rodriguez attempts to open up the Predator mythology by introducing warring factions with blood feuds and Predator dogs, and also various design variations for the Falconer and Berserker Predators, but I have a feeling the key to a good Predator sequel may be having a sustainable surrounding plotline, that there’s other stuff going on and continuing to go in in the world where the Predator drops by. That’s why Predator 2 at least half worked, that and its quirks of personality. This gang of killers isn’t enough on their own to do that, meaning that, for all the effort Atal puts in (and he does a fine job, certainly much more consistent and polished than Stephen Hopkins’ work on Predator 2), Predators feels like just another Predator movie, which is why no one much talks about it and why it failed to make much of an impact at the box office. Which is exactly what wasn’t needed after two decades. How will Shane Black reinvent the Predator? Start with a strong plot, I’d hazard.