You pulled a hat out of a rabbit. That was very colourful. 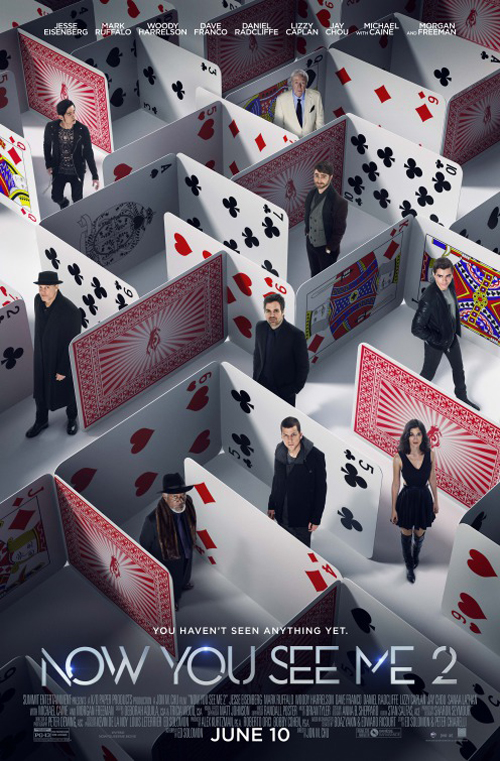 (SPOILERS) I don’t really know why I bothered catching up with Now You See Me 2, since I found the original an active crock. Masochism, I guess. Both occupy such a counterintuitive basis for a movie: “clever” magic tricks expressed by way of bad CGI, so revealing an inverse ratio of cleverness.

Compounding which is an utterly unsympathetic lead character, essayed by a surprisingly unassured Mark Ruffalo, whose Dylan Rhodes, in the last movie, took revenge on those he perceived to have been culpable in his father’s death (aside from his father doing bloody silly things for a living that were, likely as not, going to lead to his death irrespective of anyone else getting involved).

One can only assume the execs at Lionsgate/Summit were aware of the backlash against his cruel treatment of poor old Thaddeus Bradley (Morgan Freeman), because here the character is entirely retconned as being the long-time colleague of pa Lionel Shrike. Even more, he’s so loveable, he doesn’t even nurse resentment towards, or a desire wreak revenge upon, Dylan for getting him banged up. Quite extraordinary. We’re also subjected to a flashback to the terminally traumatic formative event itself as an opener, designed to reassure us, despite all evidence to the contrary, that Dylan really does have some motivation for being so damn angry all this time. It doesn’t work.

And I haven’t even mentioned his smug Four Horseman yet, one of whom has gone AWOL (Isla Fisher) and been replaced by Lizzy Caplan (Lula), who tries her best be the most irritating cast member but has stiff competition. Dave Franco (Jack Wilder) achieves the scarcely conceivable feat of being more punchable than his older brother, but that’s about the only unbelievable display here worth mentioning.

Jesse Eisenberg (J Daniel Atlas) plays the same passive-aggressive nerd rage character he always does, while Woody Harrelson essays two roles (Merritt and Chase McKinney), neither sufficiently engaging to justify double the Woody. The obvious thing to do there, particularly since they’re feuding twins, would be to engineer a startling third act identity swap, but alas Ed Solomon, who gets the sole screenplay credit this time and, it should be remembered, was one half of the team that gave us Bill and Ted, appears to have nothing up his sleeve (apologies for the magic metaphors). Together, their pranks, repartee and distraction tactics are desperately irritating rather than witty or clever.

However, this actually does come in marginally above the first picture for withholding the risible magic shows until the end. Most of the proceedings find the team requisitioned, Terry Benedict in Ocean’s 12-style, to engage in a spot of thievery that would be a lot more interesting than it is if it were an entirely different movie with an entirely different plot. Sir Michael Caine is back and still a villain (maybe he’ll be retconned for the third outing), and you wonder just how many pay cheques the mid-octogenarian needs to pick up any more. Still, if he gets a kick out of this kind of thing, more power to him. The singular interesting aspect of his presence is that said mere presence shows up how wooden poor Daniel Radcliffe is as his son. Enthusiastic, but wooden.

In a movie revolving around the mastery of stage magic, the magicians really need to dazzle; you want their trickery to provoke genuine puzzlement and genuine awe when the reveal comes. You don’t want CGI playing cards flying around a room, no matter how competent director John M Chu’s choreography is, and you don’t want Eisenberg making it CGI rain and stop in mid-CGI-air. There’s an attempt at a Mission: Impossible-style (the TV version) fake out for the final villain-snagging ruse, but it’s so obvious in build-up, it falls entirely flat. As for Brian Tyler’s score, it’s as obnoxiously pleased with itself as the fake magicians its supporting.

One has to assume the picture’s shameless appeal to Chinese audiences, by featuring a significant portion of the picture in Macau, boosted Now You See Me 2’s box office (almost a third of its total tally came from the country), guaranteeing that, while it plunged elsewhere, there will be a Now You See Me 3. I’ll definitely remind myself not to bother with that one.