Are you kidding me? I’m not helping you, you attacked somebody with a banana! 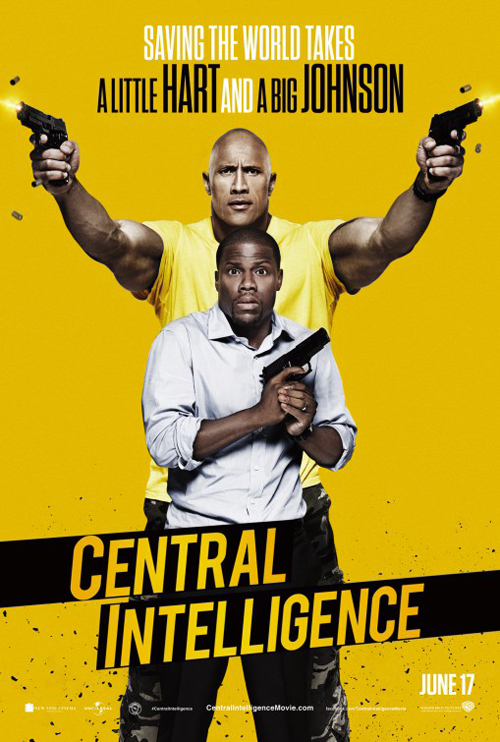 (SPOILERS) Pretty much your average run-of-the-mill, crowd-pleasing buddy comedy, short on actual inspiration but pumped with star power. The precise plot of Central Intelligence may not have been done before, but if feels like it has (fat, bullied high school kid becomes super macho spy), and the gags follow suit. Nevertheless, the Rock and Kevin Hart (who seems in danger of becoming ubiquitous) have undoubted chemistry, and for the most part the conceit of Dwayne Johnson playing a very uncool teenager in a very cool man’s body goes a sufficient distance to make this not too aggravating, if never remotely in danger of becoming clever.

It’s more difficult to believe Hart’s Calvin Joyner was ever his school’s star athlete, since he only ever gives off class clown (the ever-present de-aging tech doesn’t sell it either – seriously, it seems you can’t watch a Hollywood movie at the moment without tripping over waxy younger versions of star faces). Johnson’s Bob Stone being goofily genuine and guileless one moment and suave and can-do the next doesn’t really play either, to be honest, except that the Rock’s charisma makes it travel.

There’s a lot here that doesn’t play, though, from Johnson’s high school fat suit, to pretending a rope is his Johnson, to his “celebratory” birthday suit appearance at the class reunion (exposing yourself in public is acceptable and even estimable if you’re the Rock, apparently). Still, the banter between Bob and Calvin has a likeable back and forth of cool/dork, switching places depending on the setting/activity. Bob wears unicorn t-shirts and loves John Hughes movies (“Then I realised high school was nothing like 16 Candles. And I’ll never be Molly Ringwald”) and exhibits disarming sincerity in response to the inevitable gang-of-thugs-in-a-bar scene (“That’s a lot of homophobia coming out of a very angry man. You need to get that looked at by a trained professional”).

The flipside of Calvin’s life having come to nothing very much (“If 18-year-old me could see me now, he’d think I was a total loser”), despite having married his high school sweetheart, seems to be remedied by joining the intelligence services and having a kid (if in doubt about what’s missing in your life, have a kid).

This is a less satisfying spy comedy than Spy, despite a very game Amy Ryan as Bob’s superior, hunting him down because she thinks he’s criminal the Black Badger, who is selling top secret satellite codes. Aaron Paul, as Bob’s believed-dead partner (of course, as soon as we see Paul in a flashback, we know he’s going to show up alive), proves yet again that he was so good as Jesse Pinkman because that’s how he plays every part (he even calls someone “Bitch” here). Jason Bateman appears as the older version of the guy who horribly bullied Bob, but the character is guilty of overkill. It would have been funnier if Trevor really had been a born-again Christian, rather than a chronically unrepentant bad guy begging to get punched. Bateman does improvise some funny lines though (“You’re still shorter than my cat” he tells Calvin).

I’m not sure Kevin Hart is destined to ever appear in a really great movie. He’s one of those comedians whose watchword are “That’ll do”. As such, Johnson walks off with the best moments (“How dare you!” he responds, when Bateman exclaims “Fuck Patrick Swayze!”) and scenes (posing as the marriage therapist of Calvin and Maggie – Danielle Nicolet – much to Calvin’s indignation; “This is not real” Calvin tells Maggie. “It is to me” she replies) There’s the occasional remark about CIA surveilling everything (Facebook, “Just pick up any phone in your house, They’re all bugged” invites Ryan with regard to Calvin’s job offer) and the suggestion that, implicitly, none of this is anything to worry about (the CIA are heroes, and the Calvin is welcomed by them with open arms, making his life all that much better). Central Intelligence also features a cameo from Melissa McCarthy, and made almost as much money globally as her vastly more expensive Ghostbusters. Together they suggest that, while the traditional star comedy isn’t dead, it has hit a bit of a rough patch.

July 05, 2020
The Pleasure Garden (1925)
(SPOILERS) Hitchcock’s first credit as director, and his account of the production difficulties, as related to Francois Truffaut, is by and large more pleasurable than The Pleasure Garden itself. The Italian location shoot in involved the confiscation of undeclared film stock, having to recast a key role and borrowing money from the star when Hitch ran out of the stuff.

The President is dead. You got that? Somebody’s had him for dinner.

July 02, 2020
Escape from New York (1981)
(SPOILERS) There’s a refreshingly simplicity to John Carpenter’s nightmare vision of 1997. Society and government don’t represent a global pyramid; they’re messy and erratic, and can go deeply, deeply wrong without connivance, subterfuge, engineered rebellions or recourse to reset. There’s also a sense of playfulness here, of self-conscious cynicism regarding the survival prospects for the US, as voiced by Kurt Russell’s riff on Clint Eastwood anti-heroics in the decidedly not dead form of Snake Plissken. But in contrast to Carpenter’s later Big Trouble in Little China (where Russell is merciless to the legend of John Wayne), Escape from New York is underpinned by a relentlessly grim, grounded aesthetic, one that lends texture and substance; it remains one of the most convincing and memorable of dystopian visions.

The present will look after itself. But it’s our duty to realise the future with our imagination.

July 02, 2020
Until the End of the World (1991)
(SPOILERS) With the current order devolving into what looks inevitably like a passively endorsed dystopia, a brave new chipped and tracked vision variously in line with cinema’s warnings (or its predictive programming, depending on where your cynicism lands), I’ve been revisiting a few of these futuristic visions. That I picked the very Euro-pudding Until the End of the World is perhaps entirely antagonistic to such reasoning, seeing as how it is, at heart, a warm and fuzzy, upbeat, humanist musing on where we are all going.