I remember smashing his head in with a cricket bat, yeah. 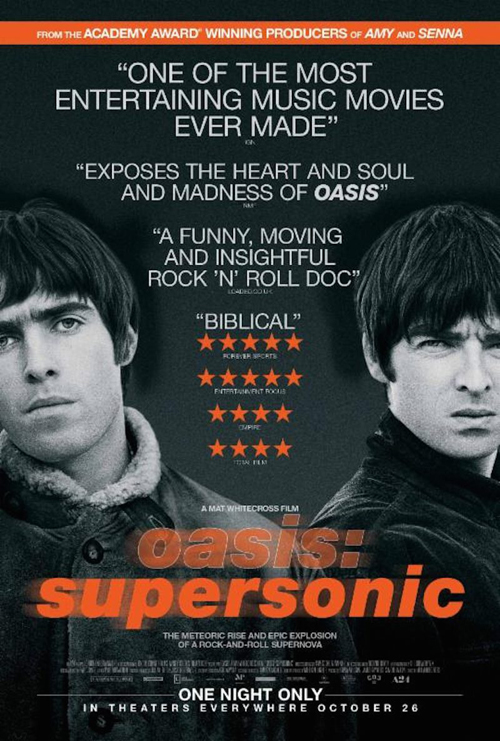 One of the best things about BBC4 is the engrossing documentaries about singers or bands you aren’t remotely interested in but whose rock ’n’ roll lifestyle makes for an inevitably fascinating story. I was never remotely into Oasis at the time – I’ll admit to considering a couple of their tunes could be classed as “decent” – and as a result I became a de facto Blur advocate in the Oasis vs Blur debate (that, and the later Gorillaz showed Albarn was much more than a one-trick pony, even if the new album is a bit suspect). So Supersonic is pretty interesting, although it would probably be more so if it covered more than their first three years, after which Noel’s creative well dried up, the sibling feuding became ever more repercussive, and only the diehards were proclaiming that each new album was actually, honestly, really good, like recovering Police fans stuck with Sting’s solo work.

Mostly, Mat Whitehouse’s film (co-produced by Senna and Amy director Asif Kapadia), which takes the band from their origins to the beginning-of-the-end-only-14-years-later 1996 Knebworth gig (for which, it is boasted, 4% of the population attempted to buy tickets), is worth it for Noel Gallagher’s contributions. While I’ve never much cared for the band, I’ve usually found him an entertaining and forthright raconteur, and it’s his soundbites, rather than those of his Neanderthal brother, that keep the doc chugging along.

As he says, “When I do an interview, I’m there to be a gobshite and cause as much trouble as possible”. Some of his comments are inevitably to be taken as a pinch of salt then, such as his avowal that the Knebworth gig was an end of an era for music that would become increasingly manufactured (not if you saw them as not terribly original in the first place and weren’t wowed by their euphoric success), but his view of their discovery and signing by Alan McGee as fate is quite endearing, and the insights provided into the siblings’ family (mum Peggy is interviewed) and the strife involving their estranged father add necessary context.

If Noel’s “Liam’s like a dog and I’m like a cat” is a bit fanciful, he’ll then break up the philosophising with dry sarcasm (“Liam clearly would dearly like to have my talent as a songwriter. And there’s not a day goes by when I don’t wish I could rock a parker like that man”). As for Liam himself, there’s little that makes him look good, from off his head footage to the account of how he pissed all his brother’s stereo when they shared a room. Occasionally, he’ll raise a smile (footage of a gig where he’s on the receiving end of multiple projectiles elicits a “I’m not a fucking coconut stall”) and even less often there’s a genuine revealing moment (how he’ll just be “absolutely fucking still” on stage, staring over the audience, knowing he’s in control).

The rest of the band, from those who fell out to those who didn’t (Bonehead) are very much background players, not that they’re short-changed interview-wise, but they just don’t have the same strength of personality, or healthy stock of eyebrows. As for Whitehouse’ approach, it leaves me wistful of the basics of BBC4, since there’s far too much in the way of “funny” animated accompaniment, evidencing more a concern about the narrative being insufficient to tell itself than a creative urge (this is not an uncommon problem: Jarmusch is even at it in Gimme Danger). But Supersonic is a solid piece of work and not just one for the devotees.