You’re not a clown, you’re a physician. 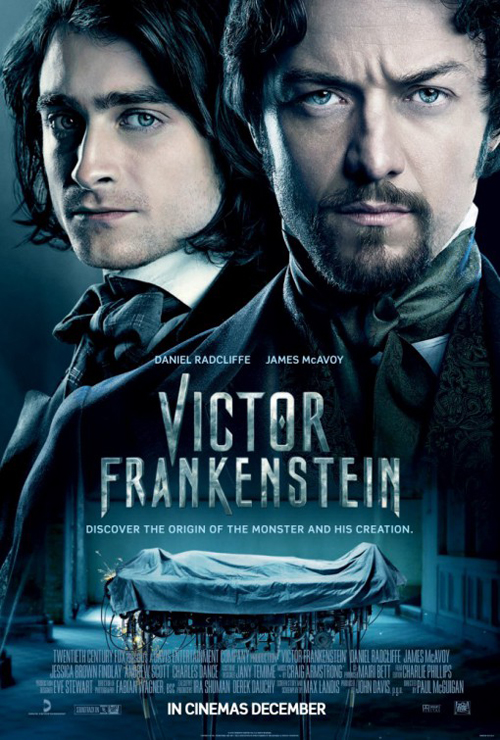 (SPOILERS) Well, Max Landis did it again. Gave birth to an unmitigated pile, I mean. One wonders if his involvement in Chronicle was a fluke, and additionally wonders why dad didn’t just say “Don’t you bleedin’ dare, son” regarding junior’s designs on remaking An American Werewolf in London. Victor Frankenstein can’t even lay claim to being hilariously bad – at least Sir Ken’s Mary Shelley’s Frankenstein has that going for it – and shows that even the usually reliable Paul McGuigan can come a cropper if his material is old rope.

A few weeks back I credited Daniel Radcliffe with a decent performance in Swiss Army Man. He’s back into the red with this, a truly woeful turn in which he gives Landis’ dialogue every splinter of woodenness it deserves. Poor Igor doesn’t even have a name when first we meet him, a rubbish circus clown – who looks like a cross between Helena Bonham Carter and Edward Scissorhands, just with less polished application of pan cake than either – abused by his fellows (“It’s hard to judge cruelty when you’ve never known kindness” he observes, insightfully). But what’s this? Not-yet-Igor is actually a genius: “When I wasn’t performing, I served as the company’s doctor”.

That was about the only moment in the movie where I had a good laugh. Everything else was just too, too sad: “I don’t know if the science of life captured my imagination. I think it just helped me escape”. Yep, Hollywood execs pay millions for his kind of shit. It’s like gold dust to them. Wait, here’s some more: “Little did I know that on a chilly London evening, I would meet the man who would change my life for ever”. Such lines are all the better savoured when served up by one of the most successful young former child actors around. It turns out Igor, in Landis’ “imaginative” retelling, isn’t a hunchback at all. He just has a huge cyst that needs draining. How charming. Before long, he’s back to being a fine upstanding young thespian.

James McAvoy, who clearly and misguidedly sees this as a chance to “do a Cumberbatch” with the brash, energetic, socially-difficult scientist, was probably egged on by ex-Sherlock director McGuigan (who also furnishes the piece with Sherlock-esque subjective genius visuals, as both Igor and Victor perceive the anatomical workings of their patients/experiments – it rather comes across as a bit tired and desperate). Victor’s an obnoxious drunk, and generally much too annoying to be either charismatic or engaging, given to meta-comments like “I think it’s high time you met our monster” and correcting a Young Frankenstein pronunciation of his name that everyone probably thought was a hoot in rehearsals (likewise the Bride of-esque “They LIVE!” and Igor getting in a ”Yes, master”). Victor is haunted by the death of his brother, for which he feels responsible, and his father (Charles Dance; quids in there, Charles) blames him for it too, in that old chestnut.

Also on hand is the Andrew Scott (also present from McGuigan’s Sherlock cast is Louise Brealey) as Inspector Turpin, proving that, even without a sing-song cretin Oirish accent, he’s tremendously irritating. Turpin is fervently religious, so his clash with Victor is as subtle and nuanced as you might expect from Landis (“Are you a police officer or are you a theologian” quips Victor leadenly). The dialogue really is dreadful. At one point, Igor announces they will need lots more energy for their experiment, before stressing, “And I mean, tonnes more”.

The movie starts off over-stylised and undernourished and only becomes more so as it progresses, a noisy, choppy, paceless mess more akin to Stephen Sommers (but without the bat-shit craziness) than McGuigan’s usual range. The tale culminates in the usual monster-unleashed thing, underwhelmingly designed and initiating a really rather tiresome altercation in a (naturally) thunderstruck castle. About the only scene of any merit is a previous reanimation, as Victor and Igor bring life to a hideously stitched together chimpanzee, the demonstration unfolding atmospherically. At least, until they switch from a prosthetic to a CGI creature.

Still, this dud doesn’t seem to have done anyone any harm. McAvoy and Radcliffe continue unabated. Landis just took a huge payday for Netflix’s Bright (fortunately, it’s being rewritten. Unfortunately, by David Ayer). And McGuigan has made Eon’s Film Stars Don’t Die in Liverpool, which has led to rumours of his saddling up for the next Bond gig. I’d have been all for the director of Push, Lucky Number Slevin and season one of Sherlock getting the job, but on the evidence of Victor Frankenstein, it would be tantamount to reemploying Lee Tamahori.