There’s no surf in Michigan. 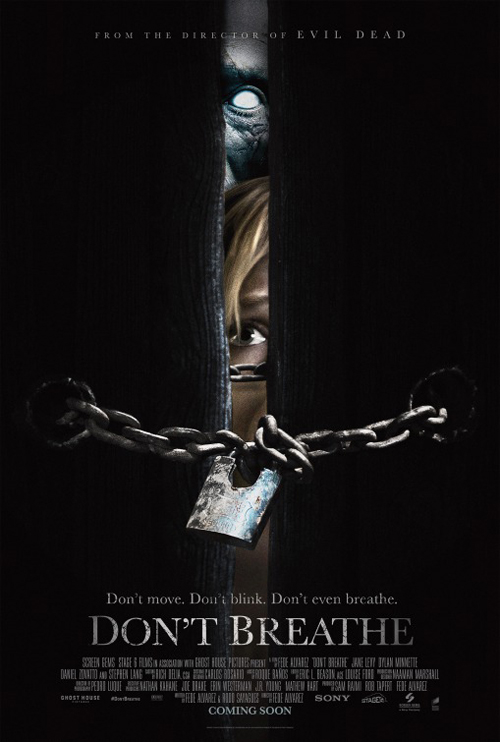 (SPOILERS) I passed on Fede Alvarez’ The Evil Dead remake – it seemed a tad too close to torture porn for my tastes, and besides, why redo Evil Dead if you’re eschewing a sense of humour; it’s what made it what it is – so this home invasion thriller in reverse is my first exposure to his work (he also has a new Lisbeth Salander movie, baffling rebooting the series with the fourth instalment, and a remake of Labyrinth on his to-do list). Don’t Breathe is okay, effective within its highly exploitative bracket, rarely doing anything but serviceably pushing obvious shock buttons.

I’ve seen reviews complain about the rape subplot herein – some even seem to think the Blind Man’s defence of “I’m not a rapist” is a representation of the views of the filmmakers, and that it thus needs emphasising that he is, in fact, which rather suggest a desire to be outraged than ends up making them look a bit dim –  but it seems to me to go with the generally dubious territory of this kind of horror movie, and it’s just batshit crazy enough in conception, with, appropriately triumphant come-uppance, to get a queasy pass (one can almost imagine Alvarex and co-writer Roso Sayagues working backwards from the Blind Man receiving a mouthful of turkey-basted spunk).

The sex dungeon reveal is about the only really surprising development in the movie, but it has the consequence of reducing Stephen Lang’s Blind Man to a standard hissable villain, when there might have been a more nuanced pay-off from giving all parties a point of view and requiring the audience to navigate allegiances. I shan’t spend time bleating about the variable abilities Lang displays, or question how exactly he managed to establish his lair sans vision, since it isn’t like the genre doesn’t tend to play fast and loose with rules and internal logic in favour of shocks; success is usually judged on whether the visceral impact overcomes such peeves. Nevertheless, it might have been an idea to give him more intruders to dispatch, so as to create a little doubt about who’s going to make it out alive and when.

The trio of housebreakers vary from semi-sympathetic (Dylan Minnette’s Alex is morally opposed to the plan from the off, but gets on board for Rocky’s sake) to annoyingly so (they give Jane Levy’s Rocky a kid sister she needs to get away from her drunk stepdad, motivation so rote, it’s only Levy’s performance that makes her remotely relatable) to obviously doomed from the first scene (Daniel Zovatto’s Money jizzes all over the floor of their initial break-in – there may be a coherent subtext to Don’t Breathe’s profusion of ejaculate, but I wouldn’t bet on it).

Alvarez pulls off the scares with due diligence, including a protracted sequence in a darkened cellar, a slobber-dog on the ravening loose and a Lost World-inspired plunge onto a cracking glass roof, but is never in danger of making the house seem less than bigger on the inside than the out. The results are no Panic Room as far as high-water marks in claustrophobic tension go (or Green Room for the matter), and it would have been more fun if Lang had been closer to Rutger Hauer in Blind Fury than a vision-impaired Josef Fritzl, but Don’t Breathe is nothing if not efficiently staged. Producer Sam Raimi has said of the planned sequel, “It’s only the greatest idea for a sequel I’ve ever head. I’m not kidding”. I very much doubt that, but I’m willing to be convinced.