Why would you sell the cows? 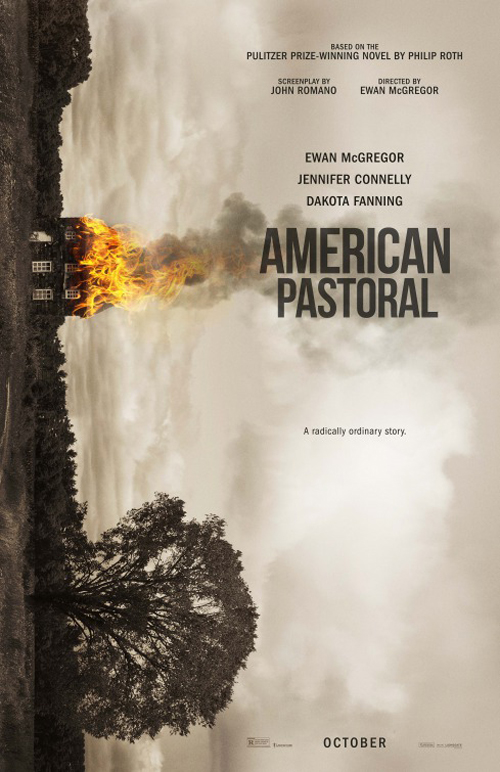 (SPOILERS) Maybe Philip Roth and cinema just don’t mix. I couldn’t say for sure, as I haven’t read any of his novels, but the consensus is pretty much that none have resulted in highly acclaimed adaptations (eight have been translated to film or television thus far). American Pastoral won him a Pulitzer, so I presume it must be good, although you wouldn’t know it from the stodge that ends up on screen, any more than you’d have the remotest idea what it was in the material that hastened Ewan McGregor to make his directorial debut.

He can’t take the blame for the screenplay (stand up, John Romano) so that’s something in his favour, and technically, I guess, you could call him competent, but in terms of putting a dramatically coherent film together he does, alas, seem pretty hopeless, miscasting himself in the lead (and this after a string of roles that have rather re-established his early promise) to underwhelming effect – ironic, since he had been attached as an actor long before he decided to direct. And there may lie the rub of his mishandling, adapting the ‘60s milieu in the hokiest, undemanding fashion; at times, you’d be forgiven for thinking you’re watching a sexualised, sweary episode of The Waltons, there’s so much platitudinous messaging and moralising on display.

Concerning son of a glove manufacturer (not a euphemism) Seymour “The Swede” Levov and the falling prey of his family – or more particularly his daughter Meredith (Dakota Fanning) – to ‘60s radicalism, McGregor professed to identify with the protagonist’s parental concerns, but there’s barely a point when the proceedings don’t play in the mode of caricature, rolling out every cliché in the book, be it period newsreel footage and soundtrack choices (For What It’s Worth, as magical as it is, only elicits a groan in this context), activists sporting berets or the noble white man protecting his loyal black female employee (Uzo Aduba) from rioting. This passage includes a particularly unlikely moralising lecture by Aduba to a guilty-looking soldier (even though the context is foregrounded, and critiqued by the Swede’s daughter, it still plays as entirely tone deaf).

Fanning’s performance is reasonable but let down by McGregor’s indifferent direction, while Jennifer Connelly gets a particularly thankless part as wife and mother, involving plastic surgery leaving her looking exactly like Jennifer Connelly, but with added lipstick. Other dubious choices include a dose of waxy-looking CGI de-aging for Ewan and Jen in their youth and hilariously crap prosthetics for Rupert Evans and Ewan in their dotage.

On the periphery, a few performers add a bit of gristle to enliven the proceedings; Molly Parker as a self-righteous and deluded shrink, Peter Riegert channelling Elliot Gould as the Swede’s father, providing at least some insight into why Roth has a reputation for being very funny as well as insightful, and David Strathairn, instantly classing-up the bookend material with a reflective, melancholic narration as Roth’s most-used authorial stand-in, Nathan Zuckerman (attending the 45th high school reunion, where he was classmates with the Swede).

It’s repeated several times, so I can only assume it was considered pivotal, but Roth’s gloomy atheism as attested by Meredith – “Life is only a short space of time in which you’re alive” – takes on an additional “whatever” aspect as rendered by McGregor. The idea of the unappetising hidden truths, concealed by everyone, lurking beneath the “American Pastoral” isn’t so much trampled underfoot as left blandly underdeveloped. American Pastoral has the sense of an era approached by those with only hearsay to contextualise it, falling back on the window-dressing of trite character and thematic content found in such other forlorn attempts at encapsulation as 1969 (which at least had a great soundtrack).