Life’s not all cupcakes and rainbows. 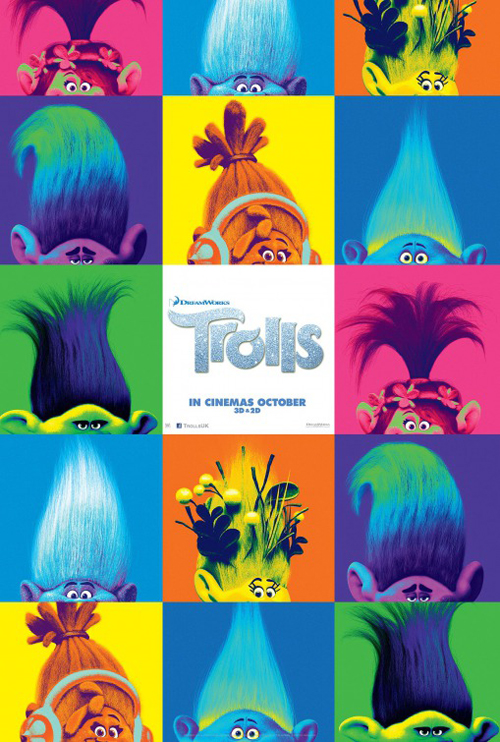 (SPOILERS) I keep having to remind myself that DreamWorks Animation occasionally delivers the goods. Shrek (the first), How to Train Your Dragon (both), Mr Peabody & Sherman (no, really). When they first appeared on the scene, I rooted for them as the underdog to Pixar’s uncontested champ, and when they got that Shrek Oscar even more so. But since then, they’ve done their best – even though Pixar’s quality control has slipped, sequels and all – to erode any good will. Trolls is just the latest deficit, a musically facile day-glo assault on children everywhere’s senses that somehow slipped through the net to garland critical approval, despite the – most likely – no-more manipulative The Emoji Movie receiving unanimous critical poop-icons.

There are a lot of poop, and general excretion, jokes in Trolls, which is of course par for the course in kids’ fare today. I pine for the halcyon days when it was kind of naughty to make a funny about farting and pooping, rather than having it expressly encouraged by all and sundry. As for the title characters, I never did understand the appeal of Troll dolls, aside from melting them over a blazing fire, so I’m undoubtedly not the target market here, even in a nostalgic sense. The movie does nothing to clarify matters. It’s possibly because Trolls are Danish in origin and, as we know, the Danish are all crazy.

They’re unflaggingly cheerful, these Trolls, except for the Justin Timberlake one, but you’d be an unhappy Troll too, if you were voiced by Timberlake (at least we’re spared his dead-eyed stare), so it’s understandable that the giant Bergens should have yen for eating them during their annual Trollstice festival. I wondered if in-house DreamWorks scribes Jonathan Aibel and Glenn Berger hadn’t taken inspiration from Fraggle Rock in this regard, to considerably less endearing results, what with oversized creatures attempting to feed on cute – not that the Trolls are cute – wee ones. I was certainly minded that the animators took their cues from The Boxtrolls for the design of the Bergens (That, and Bad Santa’s Herman Merman for the child Bergens).

To be fair, the picture’s contrasting darker elements have their merits; one sequence, in the style of storybook art (faux 2D is becoming increasingly common in computer-generated animations – who knows, perhaps we’ll come full circle to the real thing eventually), sees heads of Trolls being ripped off in glorious rainbow cavalcades, like a family-rated Kingsman. There’s the occasional decent line too; in the midst of Timberlake’s heartfelt explanation for why he doesn’t warble any more, he announces that singing killed his grandma, eliciting the aside “My uncle broke his neck tap-dancing once” (I’m not sure the flashback to grandma being grabbed by a Bergen is intentionally funny, but it certainly made me laugh). There’s also a never-fails Cyrano de Bergerac bit, in which Zooey Deschanel’s junior Bergen is coaxed into asking out Christopher MIntz-Plasse’s King Gristle (“My name is Lady Glitter Sparkle Seriously”). Bergen-wise, Christine Baranski steals the vocal honours as the enthusiastically wicked Chef.

Numerous familiar tunes litter the sountrack, as is the DreamWorks way. Some (Gorillaz, Bonnie Tyler) are vaguely inspired, but the attention to ‘70s disco is vaguely worrying (notably Donna Summer), with its echoes of coke-fuelled excess. Add to that – if you’re a Pizzagate enthusiast – the young Bergens’ date night snack of choice being pepperoni, and you have a potentially raging inferno of a movie corrupting your infants’ unsuspecting morals. But maybe you shouldn’t worry. After all, “Happiness isn’t something you put inside. Its already there”.

And, if you’re a fan of farting glitter and shitting cupcakes, you can’t really go wrong with this. Or if you rate DreamWorks’ ongoing obsession with animated slo-mo. Trolls evidently made enough to get a sequel greenlit (yet The Croods, which made $250m more worldwide, got its follow up cancelled?), but possibly a precipitous drop-off awaits, a la Smurfs. Possibly, Trolls missed its chance, since Sing swung in and really went for it in the animated medley stakes. Another three years and that niche may well have been exhausted. Generally, though, this movie seems designed to encourage kids to take amphetamines in later life, so if that’s what you want for your offspring, go ahead and let them see it.