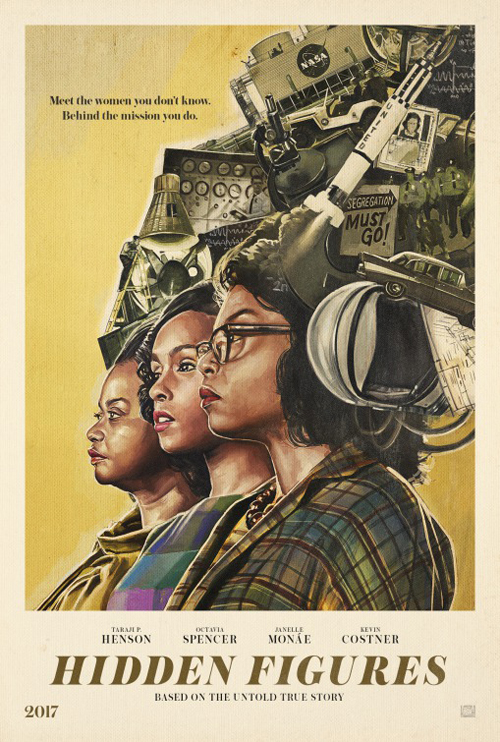 (SPOILERS) The second biggest hit (worldwide) out of this year’s Oscar nominees, Hidden Figures seems to have stuck around in theatres the longest, perhaps because of its “educational” content. This tale of NASA’s black female mathematicians is the kind of movie mind instantly goes to when looking for an example of palatable Oscar fluff (see also A Beautiful Mind), socially progressive but entirely without a spine, the kind of movie you come away from thinking all is good with the world, as we’re all heading in the right direction. It’s banal, aspirational and inoffensive (unless you find its very inoffensiveness offensive).

Theodore Malfi posits his trio of protagonists in a struggle against, and victory over, prejudice, reaching its climactic moment when nice liberal Kevin Costner (who fits these kinds of roles like a glove: paternal, upright, firm but fair, just the kind of white guy you want singlehandedly striking a huge win for the civil rights movement) goes to it against the “Colored Ladies Room” sign. Never mind that in reality Katherine Johnson (Taraji P Henson) had been using the whites’ toilets all along, or that segregated areas had been abolished by NASA by 1961; it’s symbolic, see? And provides some solid lavatorial humour as she has to continually make herself scarce to trek to the other side of the compound to take a leak.

The argument would be that, even if NASA wasn’t quite so institutionally racist by 1961, other places were, so it’s fair game. Which I can see, but you do rather get the sense the deck has been so loaded on this one by screenwriters Melfi and Allison Schroeder as to make it slightly risible. After all, another big bone of contention is Kirstin Dunst’s hard-ass boss refusing to give Dorothy Vaughan (Octavia Spencer) a promotion to supervisor; Vaughn actually held this role from 1948.

It isn’t the lack of fidelity to the truth that makes Hidden Figures a mediocre movie, though – The Right Stuff is also entirely laissez-faire with the facts, and that’s a classic –  it’s the relentless, shameless button-pushing that these alterations service. And the safe, cosy view of progress that puts this in territory not a million miles from Driving Miss Daisy. The level of cloying, feel-good sentiment ought to make any discerning viewer involuntarily gag. When Mary Jackson (Janelle Monae) opines that, as a Negro woman, she doesn’t stand a chance of being accepted into the engineering programme (which that actual Jackson joined in 1958), she is told, as an illustration of just what is possible at NASA, institution of realised dreams, “And I’m a Polish Jew whose parents died in a Nazi concentration camp”. Which is about as Hollywood Screenwriting 101 as it gets.

But, for the first half of the movie, before the “drama” of John Glenn’s spaceflight rather defeated me, it was easy to get carried along with the relentlessly upbeat triumph-through-perseverance plotting (accompanied by a mawkish score from Hans Zimmer, Pharrell Williams and Benjamin Wallfish, one that lifts the far superior L’Enfant by Vangelis, to my ear anyway).  Al Harrison’s line “Here at NASA, we all pee the same colour”, the stuff of a thousand banner articles, was the one that did for me, actually, in retrospect.

No complaints about the cast, though, except that Glen Powell simply isn’t Ed Harris, so cannot be John Glenn. Henson and Costner take the honours for how resolutely appealing they are, while Dunst and Jim Parsons are solid as the obstinate obstacles to progress who either learn (or think they do) or bring a climactic cup of atoning coffee.

Perhaps it should be a comforting sign that this kind of free-flowing syrup seems to have eternal staying power, but I’d rather watch a quality documentary on the subject any day than something as synthetically complacent as Hidden Figures.

This was the last of this year's Best Picture Nominees I got around to seeing, so for the record my ranking is as follows:

Manchester by the Sea