Would you do that? Would you wrap a lizard in cashmere? 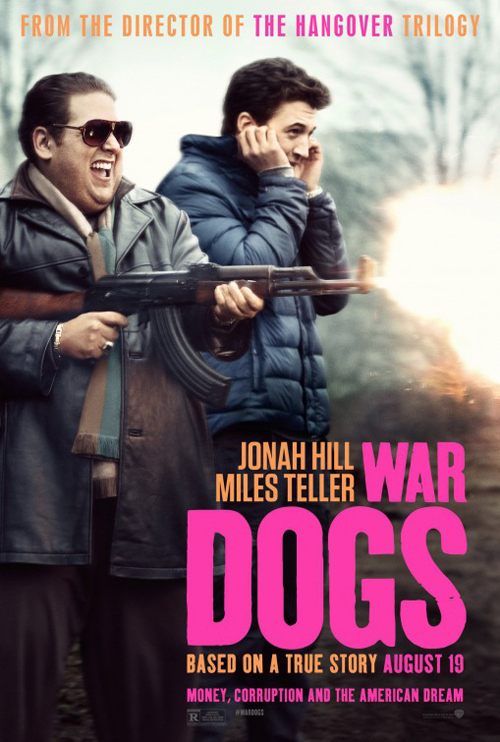 (SPOILERS) The news that Martin Scorsese and Todd Phillips will be collaborating on a Joker origins movie (most likely not starring Leonardo DiCaprio, if he has any common sense) elicits a secondary reaction after the initial “Why ever would you want to make a Joker origins movie?”; What does Marty get out of the deal? He’s only producing, after all, so lending his name to a Todd Phillips written and co-directed effort will inevitably bear fruit tantamount to every other Todd Phillips comedy vehicle. Because War Dogs is essentially Phillips trying on a Scorsese overcoat for size, of a The Wolf on Wall Street variety, and delivering something closer to The Hangover.

When Marty makes something that approximates traditional Phillips fare, he delivers After Hours (possibly his best movie, but whisper it); he can’t help but class up material. Phillips can’t help but make his more cartoonish, broader, emptier, less demanding. Added to which, he veers towards the gleefully amoral anyway, so asking him to depict conscience-free capitalism run riot – “This isn’t about being pro-war. It’s about being pro-money” – is inevitably going to tend towards revelling in the misdeeds than proving cautionary (hence Miles Teller’s character being rewarded at the end with a suitcase full of cash; not something that actually happened).

So it is with War Dogs. It’s well made (Phillips is a pretty good comedy director, which isn’t damning with faint praise as most of them have little in the way of visual imagination), well cast, has fertile material in the account of twenty-something arms dealers Efraim Diveroli (Jonah Hill) and David Packouz (Miles Teller) acting most unscrupulously in order to cater to a morally bankrupt industry (like attracts like), but it has no real impact. It doesn’t linger in the mind. As Guy Lawson, from whose 2011 Rolling Stone article this is adapted, opined, “you watch the end and you think it’s about these [two] guys. It’s not. It’s about the system”. But then, Phillips isn’t a deep guy.

One wonders whose decision it was to cut the third party to the events depicted, Alex Podrizki. I wouldn’t be surprised if it was Phillips, wary of comparisons to The Hangover that another central trio up to drug-fuelled no-good might encourage. Except that he’s inviting unflattering comparisons throughout. With Wolf by casting that movie’s Jonah Hill (very good nevertheless, particularly so when revealing Efraim’s sociopathic underbelly – the best businessmen often are so equipped, of course –  although the tendency to improv means the comedy throws the balance off at times). With other diluted War on Terror fare by making light of war zones (The Men Who Stare at Goats, Rock the Kasbah), which don’t, despite continually getting greenlit, equal box office. With any biopic that uses the voiceover to guide the viewer (see Scorsese again; when Teller explains “Ephraim never paid the box guy”, Ray Liotta swims into view). All washed down with a resolutely by-the-numbers soundtrack and tiresome pot-smoking montages.

Diveroli and Packouz (and Podrizki) took advantage of the requirement to put military contracts out to tender, post-scrutiny of Dick Cheney’s Haliburton spin-off KBR Inc eating up Iraq commissions – this operated more as window dressing than having any real effect on the majors, although this isn’t exactly an industry where one would be prone to protesting the cause of level playing fields in aid of enabling someone else to provide the instruments of death – and did indeed attempt to repackage banned Chinese munitions so as to sell them to the Afghan National Army (Chinese arms being embargoed post-Tiananmen Square).

Much of the movie’s more dramatic meat never actually happened, though – there was no dangerous drive through the Iraq “Triangle of Death” (the berretta deal was actually fouled), and it was Podrizki who ended up in Albania (but he wasn’t threatened at gunpoint). I’ve no issue with such material being invented, but the net result is Phillips shifting ever broader in tone and becoming less clear about what he’s actually saying. Throw in a rote subplot about Packouz’ girlfriend (it may be pretty much true, and Ana de Armas, shortly to be seen in Blade Runner 2049, is very winning, but that doesn’t make it any less inessential).

Adapting real events into black comedy can be tricky territory – look no further than Michael Bay with Pain & Gain to see how easy it is to screw up if you aren’t a funny guy. Phillips does know his funny, but this might have been funnier if it had been played straighter. And let its canvas billow a bit; Lawson has a point when he notes how fruitful it might have been to include the ineptitude of the Pentagon in all this. So I’m doubtful the Joker movie will find the right tone. Even less so that Phillips’ buddy Zach Galifianakis will play the lead character (he’s been there, done that). Mind you, I could see other buddy Bradley Cooper (who services a memorable cameo here) taking it on. If it wasn’t an origins tale.