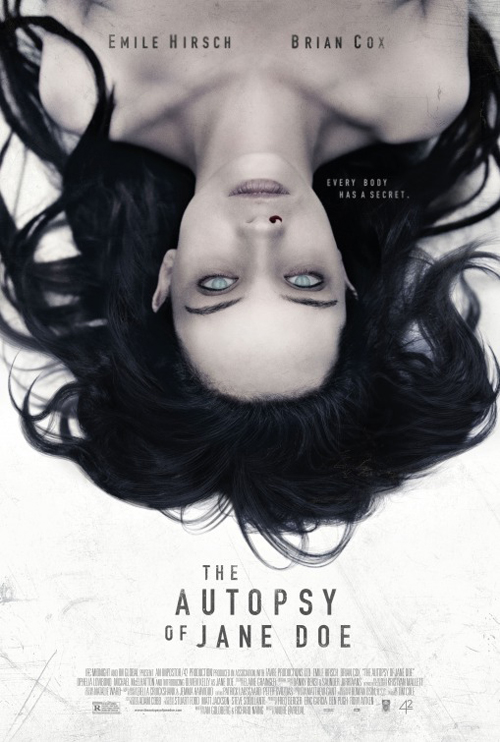 (SPOILERS) André Øvredal’s previous film Troll Hunter was an unlikely delight, succeeding in taking the generally moribund found-footage device and coming up with something both wickedly funny and disquieting. This follow up is an altogether more routine affair, expertly stitched together but relying on its choice of lead actors for what juice it has.

Which is fortunate, as there’s a strong rapport between Brian Cox and Emile Hirsch, playing father and son coroners taking delivery of a very unusual corpse and becoming increasingly unsettled as it confounds their every expectation. Cox’s veteran Tommy is a widower of several years’ standing, Hirsch’s Austin having joined him to provide company through a difficult time. The son is inquisitive by nature, wanting to get to the heart of what befell those wheeled their way, whereas dad is entirely clear about where his job ends; “Leave the why to the cops and shrinks. We’re just here to find the cause of death. No more. No less”.

The Jane Doe (Olwen Catherine Kelly) who arrives changes all that, with some finality. There’s something of an X-Files feel to the set-up, complete with a foreshadowing prologue at a crime scene (“Doesn’t look like someone broke in to me, it looks like they were trying to break out”), albeit with a much more downbeat dénouement, and the “trapped in an environment where they must solve a riddle before it’s too late” scenario is a familiar one. For a while, at least, we’re not ruling out an extra-terrestrial explanation, until it’s revealed that the cause is very much local and historical. Indeed, I found the Salem witchery a bit of a let-down, as it felt like the least imaginative version of some uncannily established oddities and reveals regarding the cadaver.

Accordingly, it’s most definitely in the early stages that The Autopsy of Jane Doe plays to its strengths, as Tommy and Austin dissect the whys and wherefores amid increasing mystification. Once cadavers are walking, cats are getting their necks broken and girlfriends (Ophelia Lovibond) are receiving axes to the chest, we’re mostly operating in the realm of standard-issue, effectively-delivered shock tactics, and it becomes clear that what you believed was foremost a character piece seemed that way mainly because of Cox and Hirsch.

Still, it’s interesting to see a very obviously British-made movie posing as American, complete with numerous fake accents (Michael McElhatton most obviously) and discreet exteriors. The Autopsy of Jane Doe also makes clumsy use of Chekov’s bell, going out of its way to explain the continued tagging of corpses (“I’m a bit of a traditionalist”) for the sake of a twist to the coda.