What god made these things? 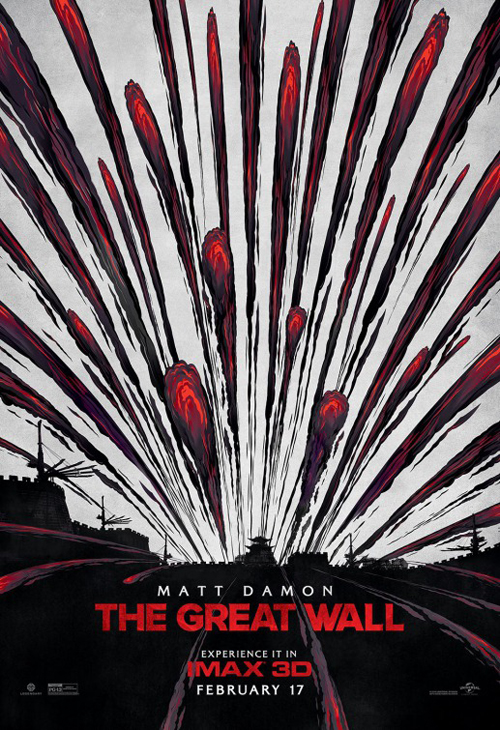 (SPOILERS) I’ve seen comments that The Great Wall isn’t a great white hero movie, as Matt Damon is only a supporting character. Who are they trying to kid? Sure, he isn’t the character extending ultimate authority in Zhang Yimou’s latest foray into the realm of colourful, stylised martial arts choreography, but the emotional beats undoubtedly revolve around him, as does the unrefined arc of an archer for hire discovering a higher cause.

In all honesty, I wasn’t that taken with Yimou’s earlier pictures in the same genre (Hero, House of Flying Daggers) as replete with gorgeous imagery as they are.  The Great Wall is duly impressive on the costuming front – much less so Matt’s fake beard, and it’s a relief to makeup artists everywhere when he ditches it – and Yimou stages several impressive action sequences during the first half (notably they all involve Damon braving it against CGI beasties; a scene in which Tain Jing bungee attacks the monsters unleashed on the wall only succeeds in illustrating what a daft idea that is).

Unfortunately, The Great Wall’s plot is entirely rudimentary (the Great Wall of China was built to withstand the onslaught of creatures such as this… and that’s it; oh, and they’re smarter than anyone realised, so a wall it took 1700 years to put up is reduced to a “Doh!” when it becomes clear they dug a tunnel underneath). There’s also no attempt to disguise the cynicism with which this US-China co-production attempts to break into that lucrative Chinese market and co-opt it for international appeal (spearheaded by Legendary, now owned by the Wanda group, which also put Jing in Kong: Skull Island and gave her absolutely nothing to do). Six writers get a credit, including the duo who gave us the inglorious Prince of Persia (I’m assuming it was Damon who brought Tony Gilroy on board), and the plotting and characterisation never rise above the generic.

Hollywood’s simply at a loss in the face of unassailable Chinese box office. When the fourth most successful film of the year globally is a Chinese movie that made almost 99% of its $870m gross in the home market, what need is there to export? Conversely, of course, Hollywood sees dollar signs so will throw money at that director to come over, where he will likely end up in the same situation as every other imported talent who gets wrung through the system (be it a John Woo or Paul Verhoeven).

Still, The Great Wall managed to make half its gross outside of China, so it wasn’t a total bust, but since half its gross is what it cost to make, it wasn’t a sound investment either. For such an expensive movie, the CGI is resoundingly average at best, rudimentary at worst. Jing makes little impression, although Hanyu Zhang and particularly Andy Lau fare better, making the best they can from cardboard cut-out characters. Damon is surprisingly okay here, considering he doesn’t really fit a period piece like this at all. Perhaps it’s just that he’s so damn personable. Pedro Pascal is the rascally sidekick through and through, with all that entails, while Willem Dafoe is unforgivably wasted as a schemer who wants the black powder for himself.

I was reasonably on board with The Great Wall for the first hour, but it descends into unstinting dullness as it progresses. There’s a sequence where our heroes must head to the capital on balloons that is both dangerous looking (most of them appear to be going down in flames) and replete with entirely unconvincing effects, while the climax is a complete wash (although, the manner in which Damon and Pascal head off on new adventures at the end has such cheerful flippancy, it reminded me of nothing so much as carefree family adventure romps of yesteryear, from Ray Harryhausen to ‘80s Raiders-rip-offs). Someone should have realised there was big trouble on this great wall of China before throwing shed loads of money at it.