Maybe I should spend less time at the cemetery. 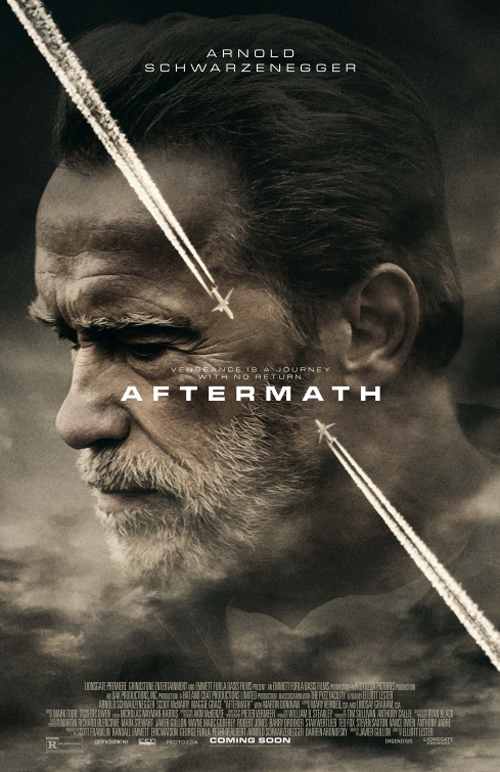 (SPOILERS) Arnie’s post-governator movie choices have been, well, I wouldn’t quite say eclectic, but certainly not as genre-predictable as his picks pre-hiatus. Aftermath might be the least predictable of those less predictable choices, a bereavement drama – based on events following the 2002 Überlingen mid-air collision –  in which he tries and fails to come to terms with the loss of his wife and daughter in an air disaster. It’s low-key and brief, but if Arnie doesn’t completely foul things up, neither is he any kind of equal for Scoot McNairy’s guilt-stricken air traffic controller.

Elliot Lester previously delivered ropey Stat serial killer flick Blitz, so presumably he’s attempting to show his versatility with a more subdued tone this time. Javier Gullon also wrote Enemy –  like several of Denis Villeneuve’s movies, very nearly very good but not quite there. Together they fashion a film that, while dealing in strong themes, ends up feeling strangely inessential, and rather mechanical in drawing parallels between the descents into darkness experienced by two men affected by the disaster.

The collision itself has its roots in an unlikely phone repair undertaken while McNairy’s Jake Bonanos is alone on shift (the Überlingen disaster was blamed on overwork and delayed radar data), but other developments, such as Arnie’s Roman Melnyk tracking down McNairy and murdering him in front of his family (surprising, if you didn’t know the history of the case), are effectively translated. The ending, however, in which Jake’s now-grown-up son (Lewis Pullman) is on the verge of visiting vengeance in kind on the recently paroled Roman put me in mind of the self-perpetuating generational misery of The Place Beyond the Pines, but almost as an afterthought (as if Gullon saw the movie and decided he’d have some of that).

McNairy’s better than his material, which involves him chugging pills, making his son raw eggs for breakfast and watching Felix the Cat cartoons. And buying a gun. I wondered if Roman had also bought a gun, since he appeared to stab Jake with the same type of complimentary flick knife Jake received with his purchase. Roman’s preceding ordeal also finds him grieving at the graveyard – and sleeping there – and facing the most unconscionably offensive legal team one could imagine pressuring him into a settlement.

But if I said Arnie doesn’t foul things up, that doesn’t mean he’s remotely a standout either. He has more of a face for this kind of role now, but he just doesn’t have range; he doesn’t fit the material any more than he did the team leader in Sabotage, on the face of it a much more “Arnie” role. Lester appears to know this, as he doesn’t inflict any showy breakdowns on him, but you’re left with a sensation that the Austrian Oak has unwittingly stumbled into an issue-of-the-week TV movie. Aftermath is tellingly at its strongest when Roman is committing his violent act, and the aftermath, in which he mistakes Jake’s wife (Maggie Grace) and son for his own family and sits disconcertingly on the couch with them as they sob, terrified.