Sometimes when you take people away, they don't come back. 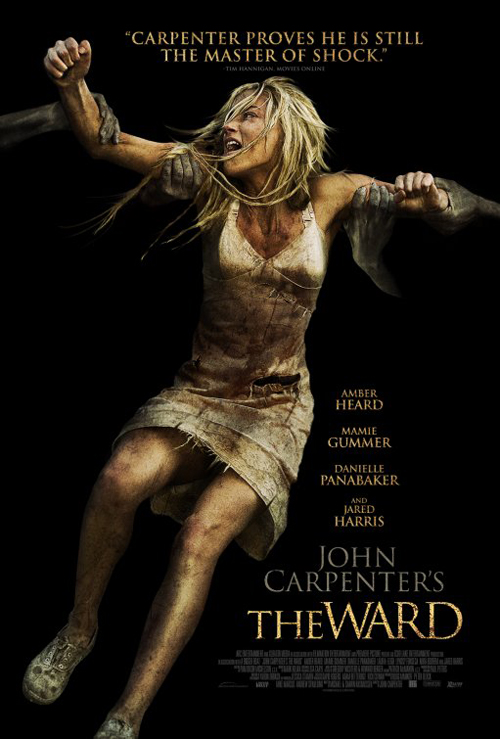 (SPOILERS) I’d felt no particular compunction to rush out and see The Ward (or rent it), partly down to the underwhelming reviews, but mostly because John Carpenter’s last few films had been so disappointing, and I doubted a decade away from the big screen would rejuvenate someone who’d rather play computer games than call the shots. Perhaps inevitably then, now I have finally given it a look, it’s a case of low expectations being at least surpassed. The Ward isn’t very good, but it isn’t outright bad either.

While it seems obvious in retrospect, I failed to guess the twist before it was revealed, probably because I was still expecting a supernatural element to be realised, it being a Carpenter movie. But then, this doesn’t feel very much like a Carpenter movie. It doesn’t have a Carpenter score (Mark Killian) or screenplay (Michael and Shawn Rasmussen) and it doesn’t have Gary B Kibbe as lenser (Yaron Orbach). I suspect the latter explains why it’s a much more professional, polished affair than the previous run of Carpenters, but it also means it lacks his sometimes-shonky personal stamp; you expect slightly duff editing or staging in even his best movies, and it feels as if there’s something a little off when the results are this smooth.

The casting too. While the mental hospital setting isn’t outside his purview (an escape from one kicks off Halloween, after all, and the exterior here recalls the one in In the Mouth of Madness), its occupants very much are, suggesting exactly the kind of slasher movie he studiously avoided making during the early ‘80s when all around were copying his one foray badly; a quintet of addled young women in an otherwise empty facility are more suggestive of an extended slumber party massacre than anything arrestingly oddball. Aside from Jared Harris as the facility’s therapist Dr Singer, though, they’re hardly redolent of the mainstream-vying likes of Starman and Memoirs of an Invisible Man.

Amber Heard (Kristen), now forever more associated with her ex’s alleged abusive behaviour than her acting, is fine in the lead, but overshadowed by showier personalities in Meryl’s little girl Mamie Gummer as nuttier element Emily and Danielle Pananbaker as flirt Sarah. As the girls’ numbers are whittled down by a former patient they (with the exception of Kristen) teamed up to kill, Carpenter throws in such assorted asylum tropes as electroshock, lobotomies, sinister psychiatrists, predatory guards and Ratchet-like nurses (Susanna Burney, memorable as Nurse Lundt).

Unfortunately, none of it is very arresting. As far as the twist is concerned, it comes after a decade of “They were all X all along” fake-out narratives that began with Fight Club and took in (most absurdly) Identity and Shutter Island, the latter two being explicitly, like The Ward, about a far-fetched method of treating the patient. Shutter Island, released the same year as The Ward, received all the attention due to its respected director and star power but is actually a much sillier piece for how elaborate and overblown it is. The Ward has the benefit of a halfway decent variation on the twist – the protagonist is actually an antagonist to the true protagonist, who is only antagonistic because she is attempting to reclaim her addled mind – if you really must go down this road, but Carpenter does next to nothing to make it engrossing. That’s the problem with The Ward all over. It’s serviceable but completely lacking in personality, which is the last thing you want from a Carpenter movie. Even a bad Carpenter movie felt like a Carpenter movie.

At the time, Carpenter was talking up a couple of future projects (“a little gothic western”, “a high-gloss psychological thriller” and an adaptation of comic book Darkchylde) but “right now, I’m concentrating all my energies on the NBA playoffs”. Which sounds about right. I wouldn’t hold my breath for another picture from the director. While others of his era (Dante, De Palma, Gilliam) struggle to get their next projects together, Carpenter seems entirely content just to kick back. 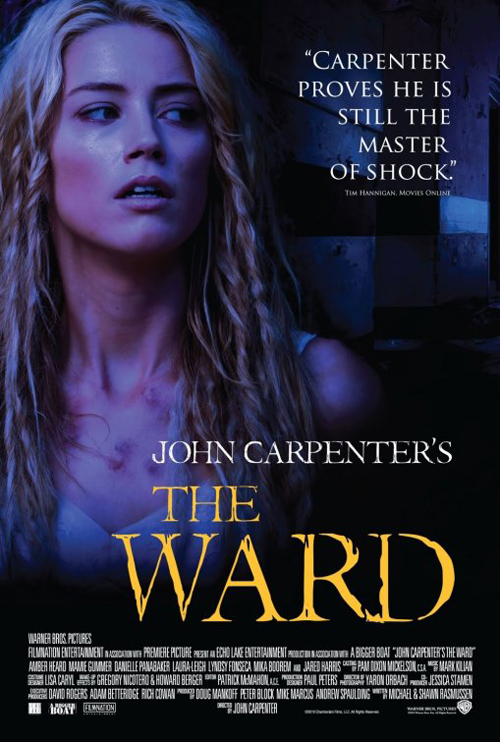