How much would I weigh? 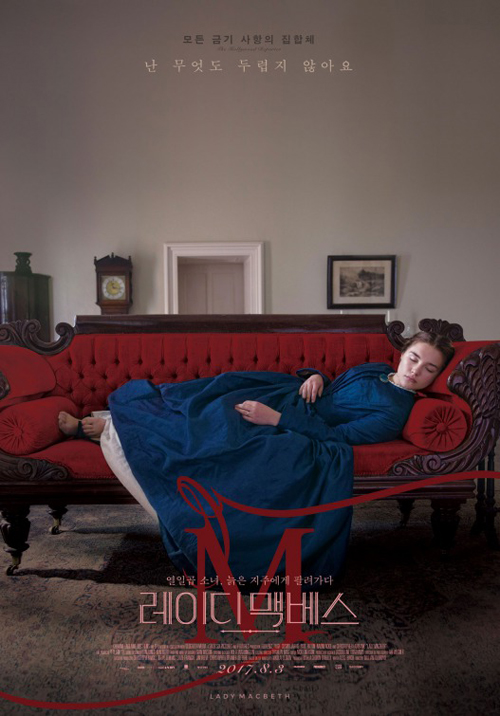 (SPOILERS) Not being familiar with the source material, I’d wondered if the title of this adaptation of Nikolai Leskov’s 1865 Lady Macbeth of the Mtsensk District was intended to be in some way ironic. Alas not. Alice Birch’s screenplay hits most of the main plot beats of the source material while embellishing Lady Macbeth with themes of class and race, but the material is so wretched, so squalid, and also at points so contrived, only Florence Pugh’s performance offers a reason to persevere.

And even then, there’s an oddly contemporary flavour to Pugh’s Katherine that’s at odds with the attempts to evoke period mores and constraints. I was put in mind at points of Andrea Arnold’s handheld Wuthering Heights a few years back, where you’re invited to adjust to the anachronistic tone but it nevertheless feels like an imposition.

The first section of William Oldroyd’s picture, in which Katherine is bought into marriage with disinterested husband Alexander (Paul Hilton), at the behest of his domineering father Boris (Christopher Fairbank), effectively establishes a stratum of control and sympathy for her plight. She’s as much a servant as semi-mute black housemaid Anna (Naomi Ackie), only she’s also reported on by the staff. As such, the affair she embarks upon with cocky cuckolder – and sexual assaulter and probable rapist – land worker Sebastian (Cosmo Jarvis, of Armenian extraction, so further emphasising the class and race divisions) seems extraordinarily inadvisable yet represents understandable payback for the binding restrictions imposed.

This wilful behaviour soon escalates, however, as she poisons Boris and beats her returning husband to death with a poker, an extreme even Sebastian blanches at. Having reached this point in the narrative, Katherine is pretty much sitting pretty, with Boris in a box and Alexander feeding the worms, so it’s necessary to awkwardly introduce a new element. Birch is only taking her cues from the miserablist Russian originator, though, introducing Alexander’s allegedly illegitimate child in the ointment and his grandmother (in the novel, it’s Katherine’s husband’s nephew and his mother who arrive). It’s a clumsy development positioned to further expose the depths our titularly comparable character will sink to, and I guess it succeeds in said task, as she plans to kill the child in order to reunite with Sebastian, now keeping his distance (other occurrences too, such as her initial come-on to Sebastian after she finds Anna trussed up, and the final rush to believe her version of events, seem at variance, even if one can stretch to explain them away).

The big problem is that there’s little fascination in following Katherine’s growth as a complete psychopath, and the open ending, dispensing with the need for a moral judgement (again diverging from the novel) leaves us feeling nothing (I don’t think it’s clever because that’s exactly what Katherine is feeling, no).

William Oldroyd feature debut is confidently mounted and Fairbank’s cadaverously abusive father-in-law is a particular standout amongst the performances, but there’s no resonance, the additions to theme creaking in how obvious they are (white patriarchy is bad, those of ethnicity may as well be mute for all the power they have, abused by those of equal standing and destined to cop the blame in the end, even over those of lower class and breeding). Lady Macbeth is the kind of material calculated to earn nods of approval from the keenly perceptive, but once you get past the ingratiating thematic content, there’s little to appeal other than presentation.