I think I was a dog in a previous life. In fact, I know I was. 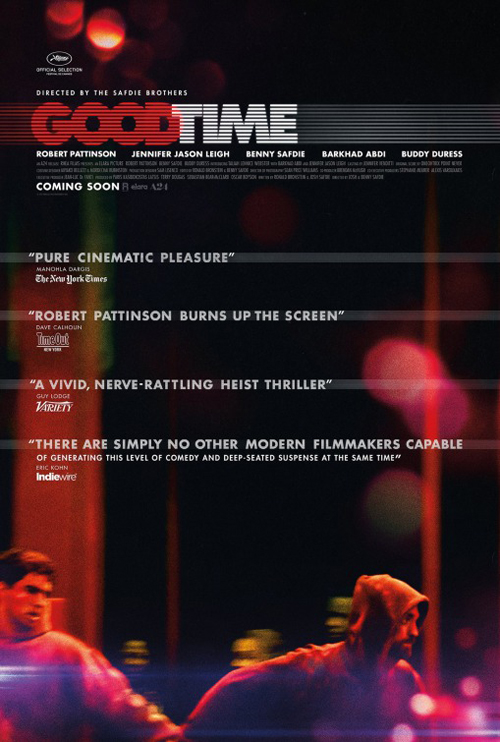 (SPOILERS) The Safdie Brothers, Ben and Josh, have been anointed the apostles of NYC grime, and duly acclaimed for their grit and verve. Good Time has made studios sit up and take notice, such that they have a 48 Hrs remake on their cards (what to do when Hollywood comes calling? Retreat from indie originality into the safety net of the unnecessary remake). I can’t say I much cared for it, however. It’s a technically proficient exercise but also an empty one.

I’ve seen Robert Pattison’s performance as Connie, a lowlife who takes his developmentally disabled brother Nick (Ben Safdie, proficiently glazed of the eyes and vacant of tone) out of therapy and promptly gets him involved in a bank robbery, compared to the likes of Pacino in Dog Day Afternoon or Hoffman in Straight Time, but there’s a vital difference between those characters and this. Connie elicits no empathy whatsoever, his conviction that he’s smarter than anyone else belied by the hopelessness and haplessness of his decisions, blundering from unholy mess to unholy mess, and proceeding to cause even greater havoc as he attempts to extract his brother from jail.

Connie’s mission sends him on a desperate night time odyssey, trying and failing to extract bail money from girlfriend Corey (Jennifer Jason Leigh, studiously distracted by her fleabag toyboy and not remotely interested in Nick’s welfare) and – absurdly, but not in a believable way – busting who he believes is Nick out of hospital (following a fight with a fellow detainee) and somehow managing to persuade a random woman to let him stay at her house for the night before putting the moves on her teenage daughter Crystal (Taliah Webster) in order to procure Crystal’s help and distract her from discovering his fugitive status (Crystal says she’s sixteen, but Corey evidently doesn’t care enough to check her ID).

There’s an immediacy to this degraded, sordid urban landscape, and a frantic energy to the Safdies’ filmmaking, but it fails to coagulate into anything genuinely gripping. The picture is well and truly side-tracked when it turns out that the entirely inept Connie has sprung the wrong prisoner, one Ray (Buddy Duress), who provides a further detour in the form of a rabbit hole of a mini-narrative explaining how he contrived to end up in cuffs; admittedly, there’s some amusement to be had that the screenplay (by Josh Safdie and Ronald Bronstein) is willing to veer so entirely off piste, but engagement alternates with bouts of tedium.

Connie, still looking for a means to get hold of money, ends up at an amusement park with Ray, in search of a bottle of LSD, a substantial volume of which Ray inflicts upon the unfortunate security guard (Barkhad Abdi) Connie has beaten senseless. By which point, you’re long past ready for either or both to be caught by the fuzz and an end put to everyone’s misery.

Which may be the brothers’ point, as the picture resumes where it started, Nick introduced to a group therapy class by Peter Verby’s psychiatrist, in which he quickly begins participating. Pattison’s convincing, and I’ve been a fan of much of his post-Twilight work, but he fails to inject Connie with a spark of the humanity, vital if we’re to invest in his fate in spite of himself.  As a consequence, Good Time rather ends up feeling like an unasked-for appointment with nihilism. Sometimes titles are most certainly misnomers.