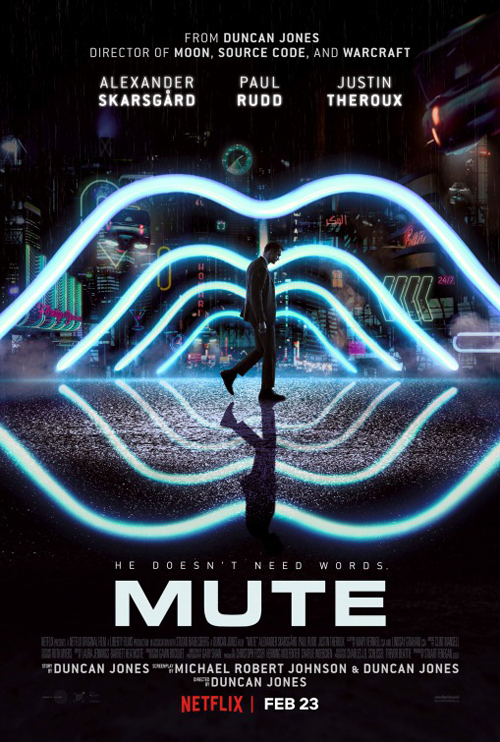 (SPOILERS) Duncan Jones was never entirely convincing when talking up his reasons for Mute’s futuristic setting, and now it’s easy to see why. What’s more difficult to discern is his passion for the project in the first place. If the picture’s first hour is torpid in pace and singularly fails to muster interest, the second is more engaging, but that’s more down to the unappetising activities of Paul Rudd and Justin Theroux’s supporting surgeons than the quest undertaken by Alex Skarsgård’s lead. Which isn’t such a compliment, really.

Jones cites M*A*S*H’s Trapper John McIntyre and Hawkeye Pierce as his inspiration for Cactus Bill (Rudd) and Duck (Theroux), noting their capacity for being very cruel to those they didn’t like. Rudd in particular has gone all out to take this literally, growing a massive Elliot Gould moustache and sporting a howling Hawaiian shirt. He’s a ringer. If Trapper John were a knife-wielding maniac with serious anger issues (but a daughter he adores). The refashioning of Donald Sutherland’s character as a disarming paedophile with an Owen Wilson blonde mop is an even greater leap, however.

As queasy as Duck’s narrative line is – I tend to think you need very good reason for pursuing this sort of subject matter in genre movies, or you run the risk of seeming glib or manipulative, and Jones doesn’t really pass that test – there’s a degree of astuteness going on in the characterisation of Bill realising Duck’s predilections and his subsequent warnings to him. Unfortunately, when the picture reaches a climax in which Duck takes off with Bill’s daughter, it moves into the kind of territory Bruce Robinson cited as troubling (“I don’t want to see a child in jeopardy as a piece of entertainment” he said of Neil Jordan’s reworking of his paedophile serial killer screenplay In Dreams).

Theroux does a very good Owen Wilson, it has to be said (you can tell Duck’s a bad seed as he has a penchant for unassuming cardigans), while Rudd’s metamorphosis into an extremely threatening villain is nothing short of a revelation (I’d never have taken him for convincing in that area). It’s perhaps unsurprising then that they effortlessly wrest any glimmers of attention from Leo (Skarsgård), as pretty much everyone here does likewise; also seen fleetingly are Robert Sheehan as a transsexual cabaret act, Dominic Monaghan as a geisha with a room full of sex-ware, Dudley-Moore-in-Foul Play-style, and Noel Clarke as an obnoxious Brit.

The Amish mute of the title, Jones’ bartender-cum-amateur detective protagonist is that exact two-word description – the Amish mute bit – in search of a character. Skarsgård has nothing to work with – his romance with Seynbeb Saleh’s Naadirah isn’t sufficiently engaging to make his hunt for her dramatically compelling – and even when Leo’s on the rampage (taking out a club full of Russians with a big stick) there’s a sense of something missing. It doesn’t help the overall tone of the piece either that Naddirah turns out to have been murdered by Bill, emphasising the dearth of good reasons to enter this less than salubrious world.

Mute didn’t start out with a sci-fi backdrop, so it should come as little surprise to learn there’s no point at which it feels remotely relevant. Sure, it’s nice to see Sam Rockwell as Sam Bell(s) again (“Lunar Industries ex-employee questioned by panel in presence of scores of his clones” announces a TV bulletin), but that’s the thinnest of motivations. The Amish-technophobia element could as easily have been applied to a present-day setting, if it came down to it, so that’s not really selling it either. Essentially, Mute offers art direction in search of cause. And costuming too, which appears to be entirely indulging Jones’ ‘80s retro-future obsession (shockingly coloured hair, new romantics, neon). The Berlin underworld is equally unnecessary but better finessed (it gives Bill and Duck an appropriately jaundiced fish-out-of-water quality; they’re refugees of the perpetual Afghan conflict).

The movie invites inevitable comparisons to The Shape of Water for its vocally-challenged lead character, but Leo never comes close to matching Elisa’s affecting presence. And if Guillermo del Toro’s picture is about outsiders’ mutual acceptance of each other for their differences, the decision to return Leo his speech is a baffling one, not least because Duck’s reasoning completely fails to translate (he wants him to apologise for killing Bill?!)

It’s worth noting the director’s departing dedication to his dad and nanny, but as a paean to surrogate parenthood the picture feels as half-baked as the idea that the Amish proverb opening the picture announces its theme (“In order to mold his people, God often has to melt them” – I don’t know if that’s an actual Amish proverb, but okay). Mute’s underwhelming reception will surely be particularly gutting for Jones, given the personal traumas that preceded and accompanied its production.

He’s reunited with Moon cinematographer Gary Shaw and composer Clint Mansell here, but the further we move away from the director’s commendable debut, the more worrying becomes the thought that he might have wowed us with a one-off. Source Code came with a string of positives, but it was very much made to order, while Warcraft was simply an overblown, unwieldy dud. Mute is better than that, at least, but there could be a lesson here that there’s sometimes good reason for failing to get a cherished project off the ground. Fingers crossed that isn’t crystallised when Gilliam’s The Man Who Killed Don Quixote arrives in a few months’ time. 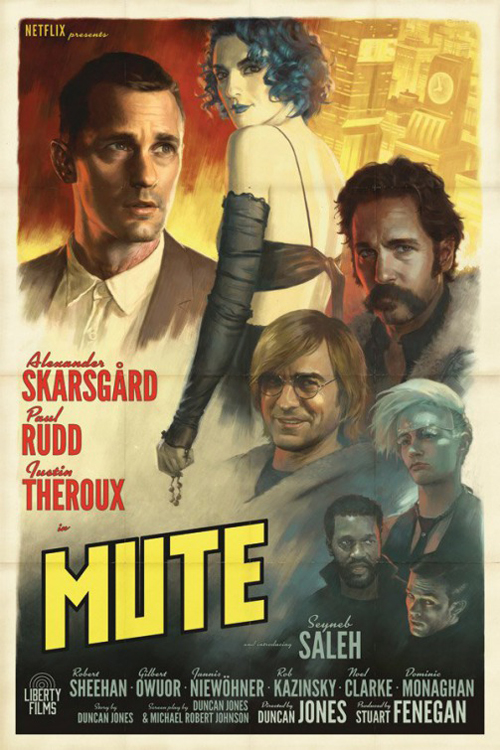