Don’t think I think you’re as dumb as you want me to think. 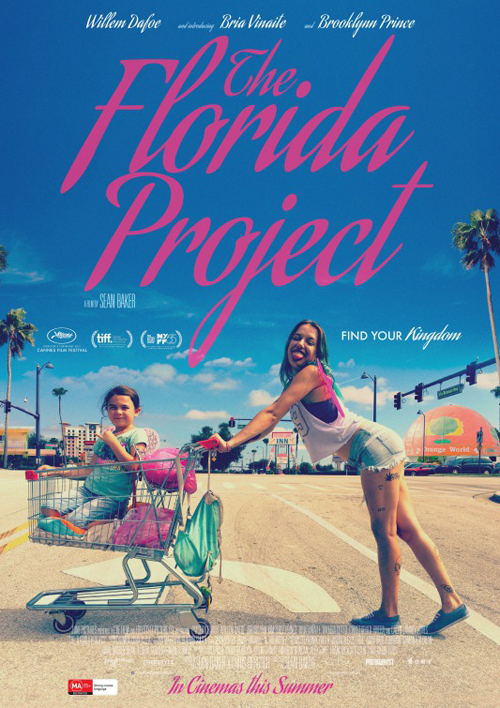 (SPOILERS) I was rooting for Willem Dafoe to win the Best Supporting Actor Oscar this year, sight unseen, simply because he’s Willem Dafoe, and it’s impossible for him to disappoint. He’s a duly impressive presence in The Florida Project, although it’s easy to understand why Sam Rockwell’s showier turn took the lion’s share of the attention and ultimately the award to boot. The picture itself is a mixed bag, shining a spotlight on the disenfranchised and down-at-heel underbelly of Kissimmee, Florida, home of Disney World, but doing much better with its portrait of the adults than the kids (the latter probably getting more screen time); there’s a feeling, at points, that it’s overcome by a persuasion towards vérité, whether that’s engaging or not.

Maybe I just wasn’t completely captivated by pint-sized protagonist Moonee’s miscreant milieu. Her very-difficult-to-warm-to mother Halley (Bria Vinaite) lets her run riot with her friends, and director Sean Baker (also co-writer, editor and co-producer) rather lets them run riot with the picture. He elicits very immediate performances from his young untrained cast, but you wouldn’t make the mistake of thinking any of them are naturals. I’m frankly surprised by the praise for Brooklynn Prince, blessed by her parents with a surfeit of consonants. The culminating scene, where Moonee drops her bravado and bursts into tears at the prospect of losing her mother and being sent into foster care felt like the most artificial moment in the picture, notable also for the outburst of vulnerability being directed at her new “best friend” Jancey (Valerie Cotto), who has no presence at all. On the other hand, Baker keenly captures the essence of childhood summer days where everything is an adventure, and how kids with more of a moral compass than Moonee feel guilt for delinquent endeavours (including setting an abandoned condo alight).

It’s down to Dafoe’s Bobby Hicks, manager of the local motel – where Halley and Moonee are staying, and scamming money together to come up with the weekly rent, although it’s revealed Halle’s also turning tricks, courtesy of a cameo from Macon Blair – to provide the emotional centre of the picture, looking out for the kids (who are a pain in the ass, but also provoke paternal affection) and even Halley (an even bigger pain the ass). Bobby’s a very necessary antidote to the depressing and despairing scenarios unfolding in the lives of the residents, exuding warmth even as he is put upon and must deal with his own problems (Caleb Landry Jones cameos as his son).

Baker’s got a strong eye and ear for observation, but less so for making a picture feel like a coherent whole. The scenes with the kids never quite unfold as engagingly as they should, evoking a blue collar Malick that leaves one listless, while as strong as Vinaite’s performance is, it actively resists empathy. I can quite see why this has been a critic’s darling (the director’s work generally has been feted), but I can’t help thinking Baker lucked in with the mainstream anchor that is Dafoe, keeping The Florida Project from coming completely unmoored.