Now then, you show nanny where you keep those pretty little missiles. 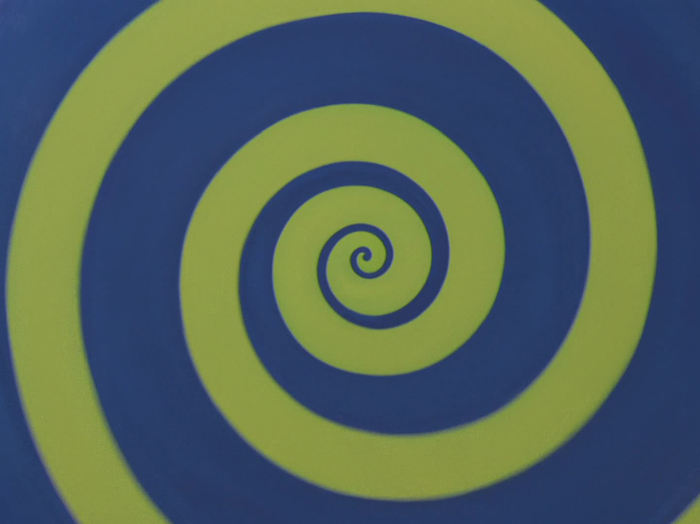 The Avengers
5.14: Something Nasty in the Nursery

Once Upon a Time, the penultimate episode of The Prisoner, sprang to mind more than once while rewatching Something Nasty in the Nursery, with its regressed adults and distorted guitar twangs announcing the sinister. It's very nearly a great episode, the only thing letting it down being the lack of any rug pull or shift in perspective beyond the initial setup. 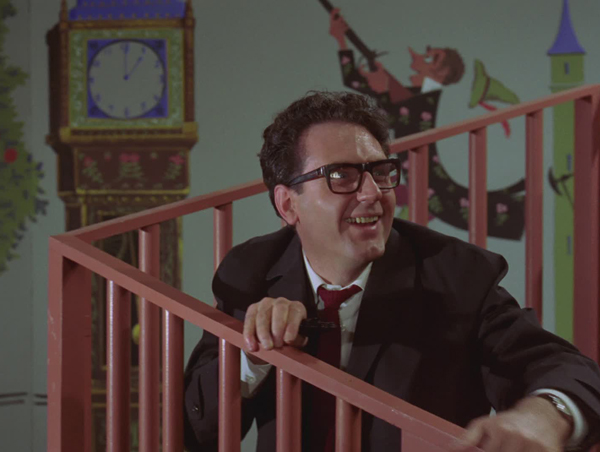 Mr Goat: I can guess why you’re here.
Steed: You can?
Mr Goat: An aura of proud fatherhood surrounds you.

What it has in spades is style, very much of a woozy, psychedelic lilt thanks to James Hill's impeccable direction (he might be the most consistently impressive of the series' returning craftsmen). From the moment Wilmot (Dennis Chinnery, Gharman in Genesis of the Daleks, as well as appearing in The Chase and The Twin Dilemma) picks up a bouncy ball – baby bouncers – and the screen becomes a swirl off hypnotic blue and  yellow, accompanied by nursery rhyme music, we know we're in good hands. 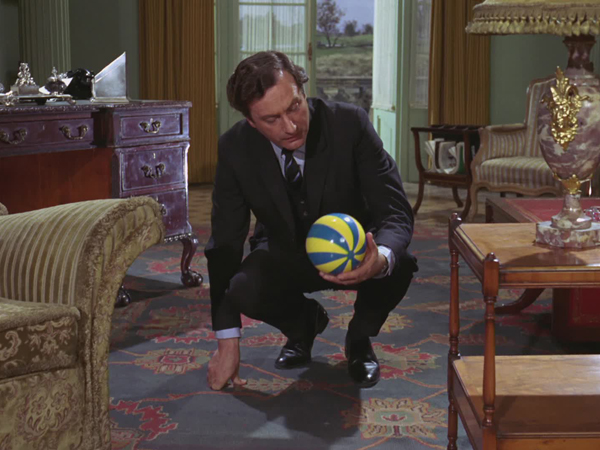 Wilmot: Ministers of the Crown, my colleagues, personal friends.
Steed: It's ridiculous.
Wilmot: Quite, these men are from the best families. They're British to the core!

Rather like What the Butler Saw, the setup finds suspicion falling on three individuals when vital defence secrets are known to be leaking. And at least two of them are very familiar faces, Paul Eddington's Beaumont (2.17: Immortal Clay – The Good Life co-star Penelope Keith is credited as Nanny Brown) and Patrick Newell's Sir George "Georgy Porgy" Collins (4.1: The Town of No Return, Mother-to-be, of course, The Android Invasion). There's also Webster (Paul Hardwick). 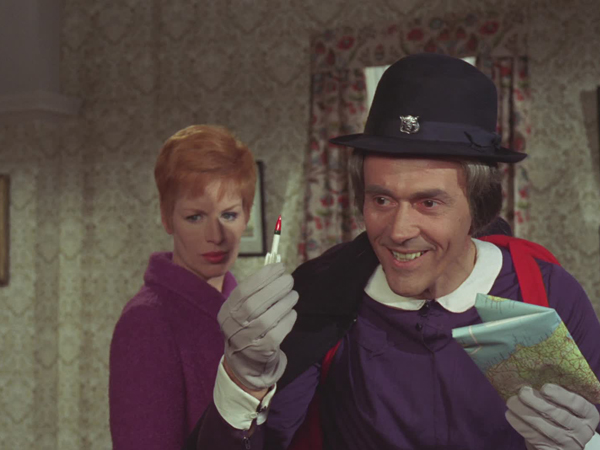 The ruse, as (over-) elaborated by Mr Goat (great name, memorably played by Dudley Foster – the crazy dentist in 4.14: The Hour That Never Was, Cavan in The Space Pirates, and here memorably sinister in a Norman Bates kind of way as alter ego Nanny Roberts) to someone who knows full-well anyway; it requires the handling of a baby bouncer, whereby, "Absorbed into the skin, this drug produces feelings of infancy. But the memory remains unaffected, enhanced even, as long as they feel secure". And susceptible to being asked questions about top secret information. 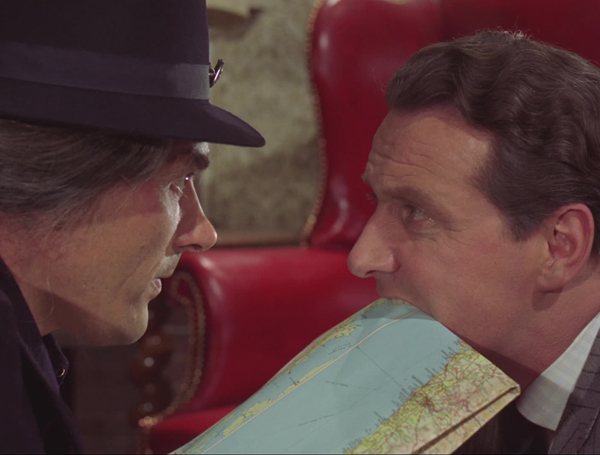 Mr Goat: Now then, you show nanny where you keep those pretty little missiles.

Eddington and Newell, in particular, give commendably infantile performances ("Here cuddles. Come here. Here’s a good boy"), and there are some quality moments with our lead duo, Emma coming under the influence and a fake-out where Steed is assumed to be likewise (except he's wearing gloves, pretending he’s been dosed, and proceeds to rip up the map showing the locations of those pretty little missiles). 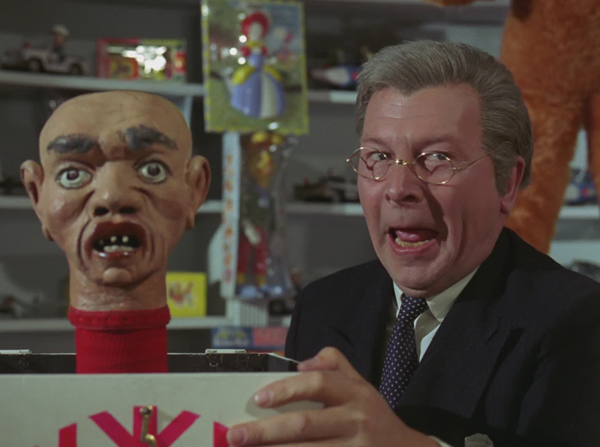 The episode features a number of incidental pleasures, including Steed's visit to Old Martin's Toy Shop ("Toys for the offspring of the nobility"), where there’s disappointment that, even though he’s gentry, he isn't landed – as Avengers Forever points out, Mrs Peel doesn't take that particular trip, as teased by the opening haiku – a sequence in which Gordon (Trevor Bannister as a loathsomely enthusiastic heavy) attempts to run Emma down, and Mr Martin's (Clive Dunn, 47 but playing 20 years older, and sans moustache) death via gun-in-a-box. 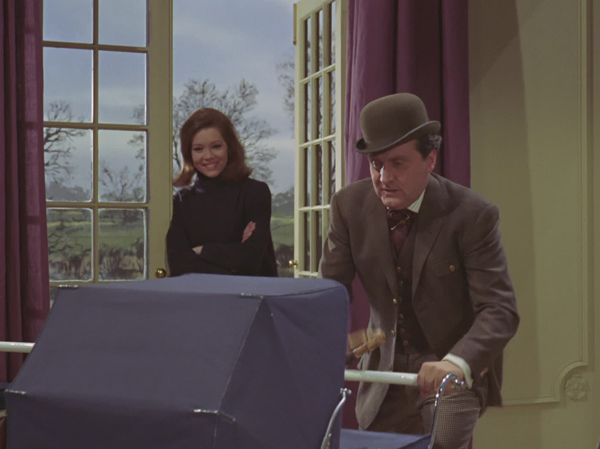 There's also an attempt on Steed's life with a bomb that ends up in his tuba, which is unceremoniously straightened for a resultant sight gag. And Steed is left with a coterie of mewling babes, none of whom are ultimately revealed to be real (they're dummies in the prams); "Ah, just like you. You'd make a dreadful daddy" chides Emma on entering. 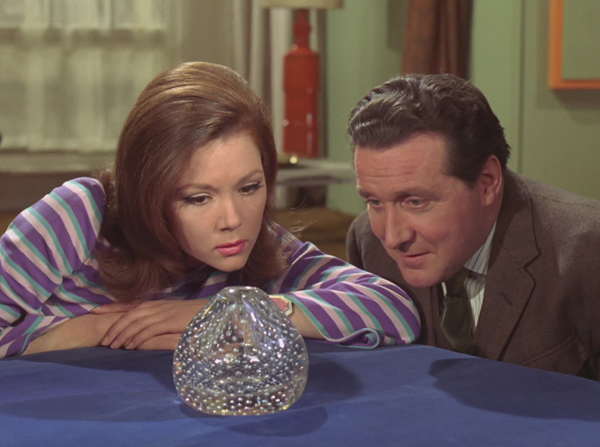 The crimes are at the behest of GONN (the Guild of Noble Nannies), not one of the best acronyms. The "Mrs Peel we're…" comes via a children's carousel, while the coda finds the duo self-reflexively crystal gazing ("I see some writing. It says 'Watch next week' "), as Steed leads off with some cryptically unanswered insights into the fathomless depths. 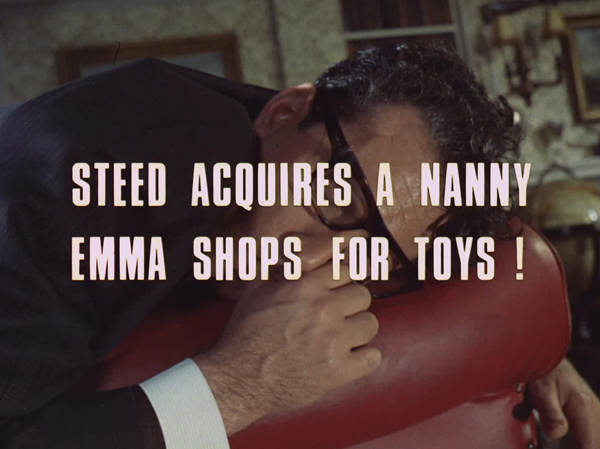 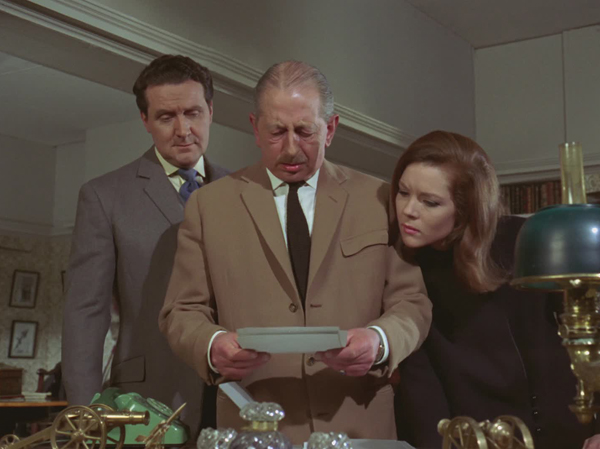 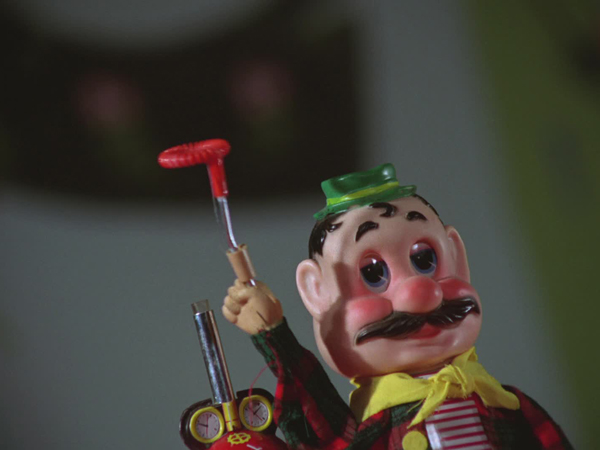 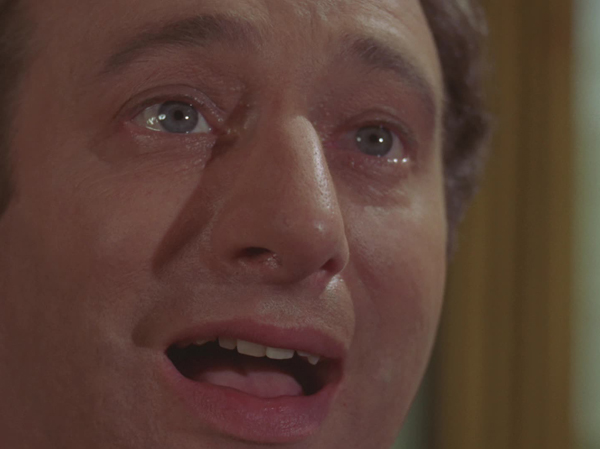 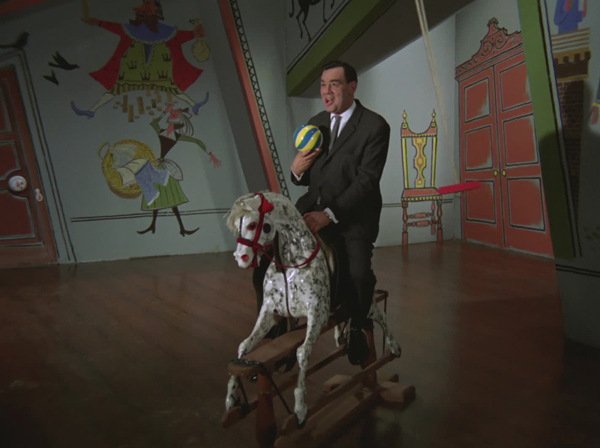 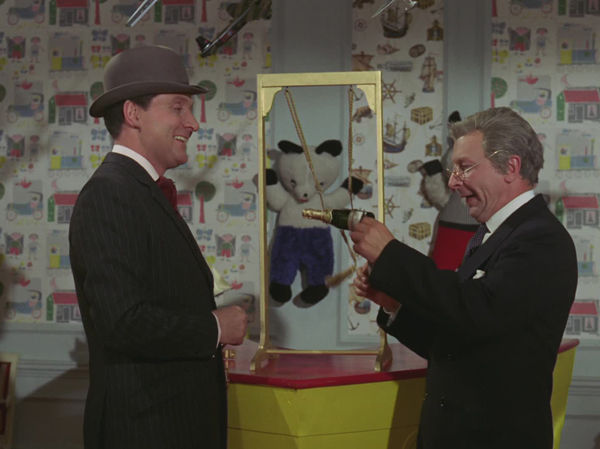 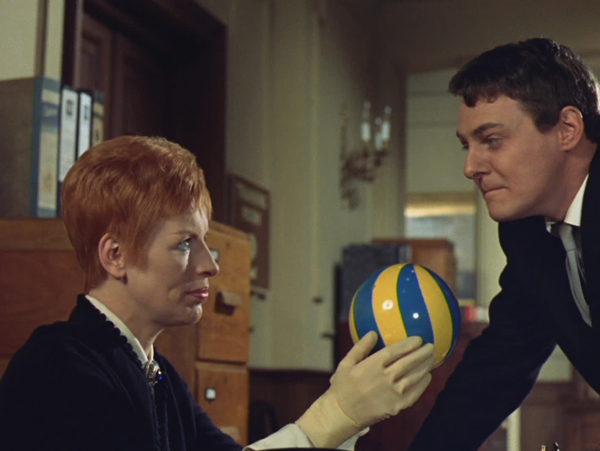 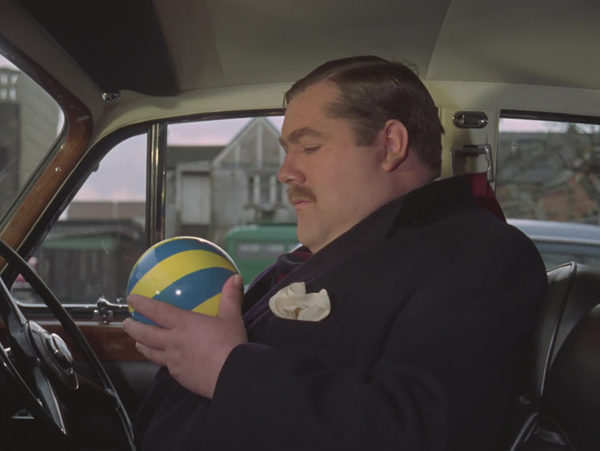 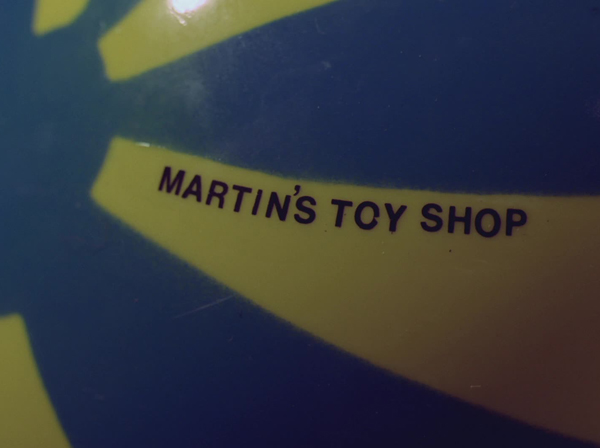 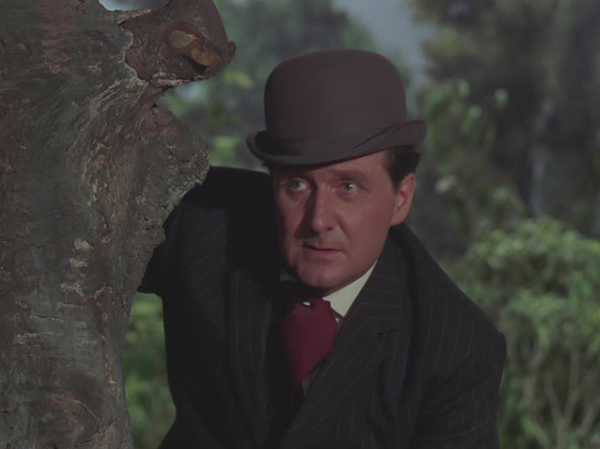 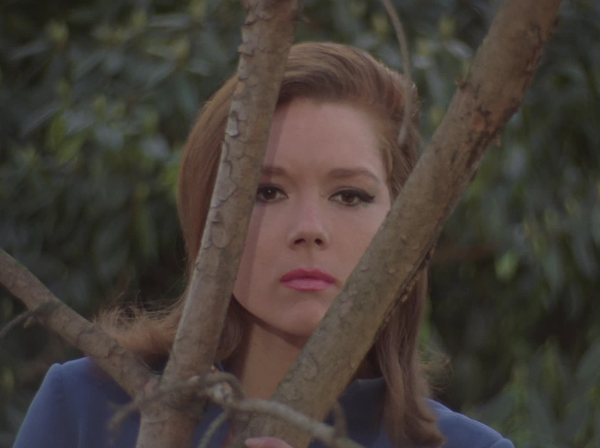 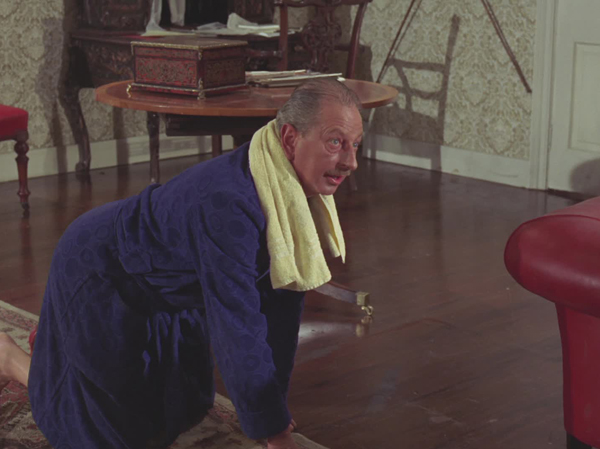 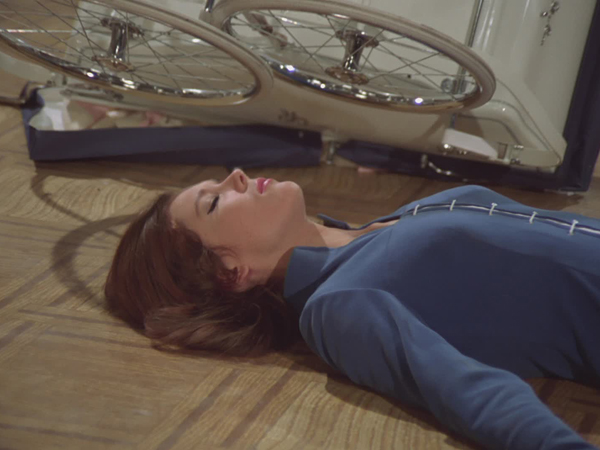 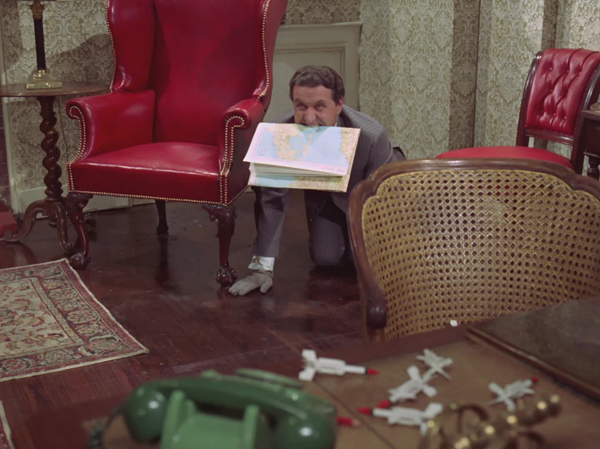 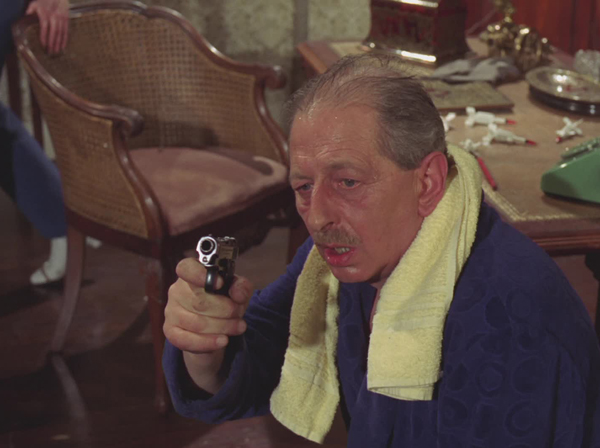 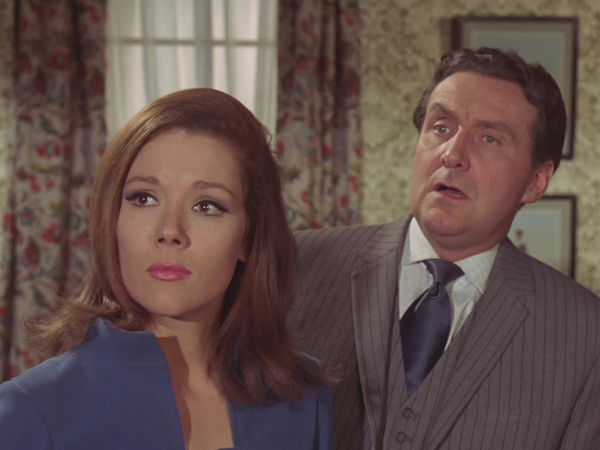 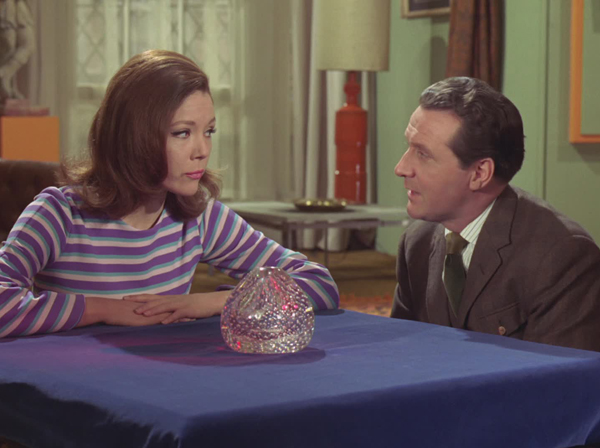