I can't explain now, but I've just been murdered. 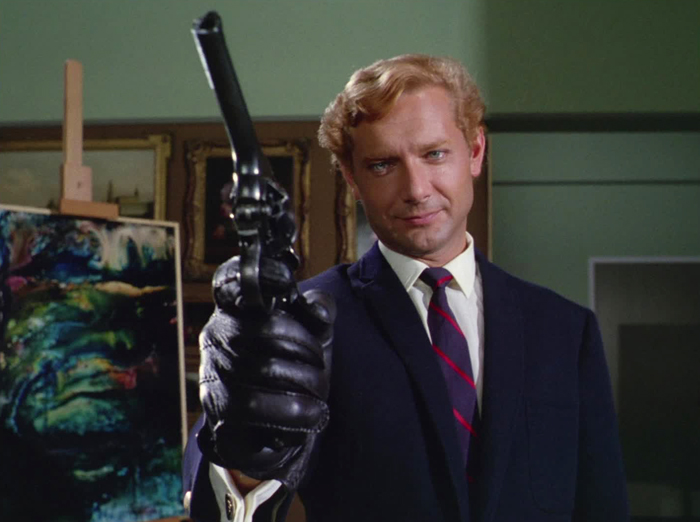 The Avengers
5.21: You Have Just Been Murdered

Slender in concept – if you're holding out for a second act twist, you'll be sorely disappointed – You Have Just Been Murdered nevertheless sustains itself far past the point one might expect thanks to shock value that doesn't wear out through repetition, a suitably sinister performance from Simon Oates (Steed in the 1971 stage adaptation of the show) and a cartoonish one from George Murcell (1.3: Square Root of Evil) as Needle, of the sort you might expect Matt Berry to spoof. 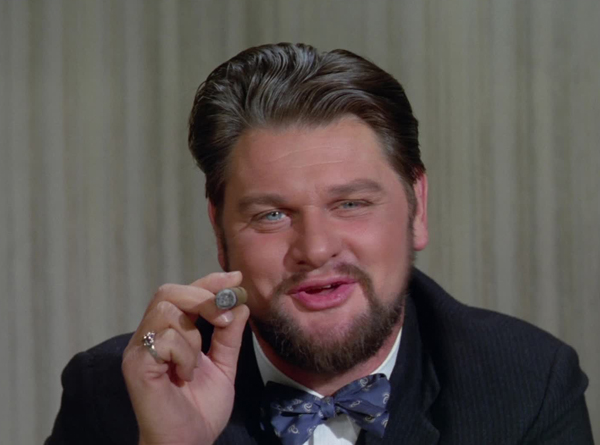 Jarvis: I can't explain now, but I've just been murdered.

In the kind of larky endeavour that might well have been devised from the title backwards, Philip Levene's teleplay finds Jarvis (Geoffrey Chater) menaced by blonde psychopath Skelton (Oates), the latter appearing to off the former repeatedly – by bullet, by knife – only to reveal each time that it's a fake-out, throwing him cards announcing "You have just been murdered" and "You have just been murdered – again"”, the limit being four times, at which point it's curtains. Although, it's curtains anyway, unless they leave the country after paying up £1,000,000 to Skelton's boss Nathaniel Needle, who very wittily lives in a haystack. 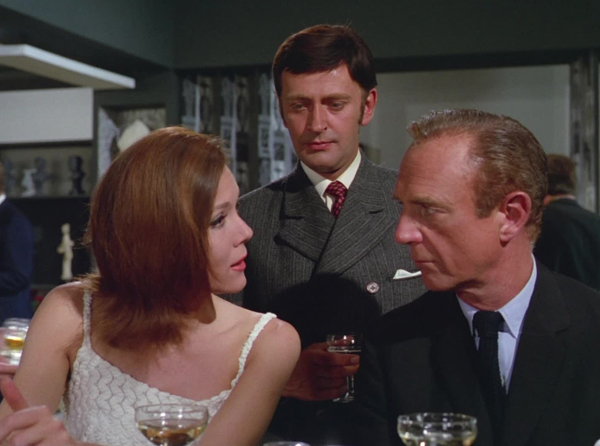 Steed: Do you detect that heady aroma?
Mrs Peel: Roses?
Steed: Money. The sweet, sickly smell of money. The air's heavy with it.

Other rich types, all banking with Lord Maxted (Robert Flemyng, The New Avengers' To Catch a Rat), who alerts the Avengers to unusual withdrawals from his clients, include Rathbone (Leslie French, 2.11: Death of a Great Dane, Silver Nemesis poor sod) hiding out in his impregnable fortress, and Unwin (Barrie Ingham, Alydon in Dr. Who and the Daleks, Paris in The Myth Makers), something of a playboy, who takes a shine to Mrs Peel and has leggy girls in top hats and stockings serving drinks at his parties. 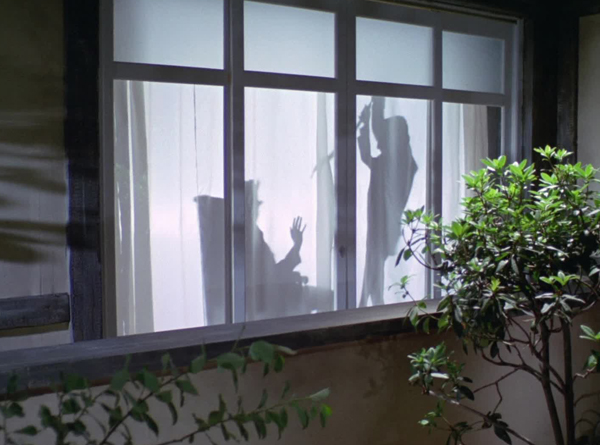 Needle: You see, Mr Unwin, there's no escape. You may think you're invulnerable, but we can always get to you.

How precisely they get in to these rich bods' abodes is never answered, which is a mite frustrating, but there's plenty of action once Steed refuses Unwin's nervous brush-off that he can deal with any trouble; as it turns out, he can, and Emma grabbing the suitcase full of payoff money as it's dropped off a bridge puts her in danger since it turns out Unwin put a bomb in it. 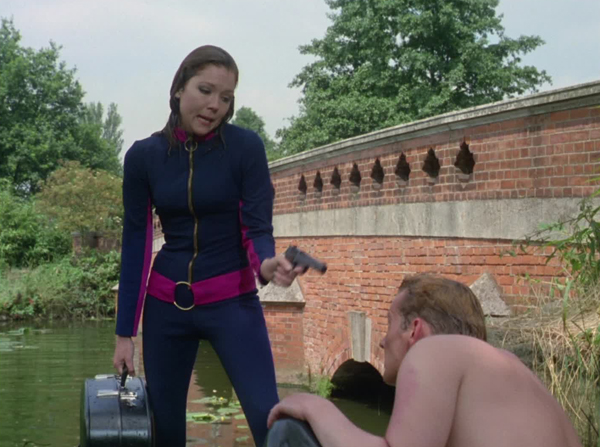 Rigg engages in a genuine, double-free slice of action in the river (and earlier she's also teetering on top of the bridge), which is more than you'd ever get Macnee doing ("Now take me to your leader. Or lead me to your taker"); she's very handy in this one, impaling an earlier heavy (Frank Maher) on a sickle (in the next episode she will merely scrutinise one), so it's a shame she ultimately needs rescuing by Steed. 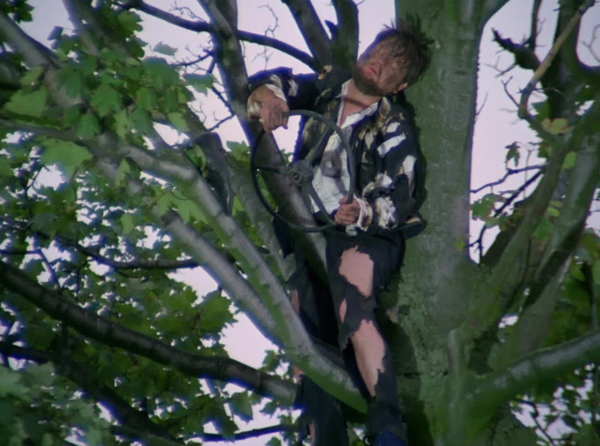 Unwin: I should have told you, but I had been murdered four times.
Steed: If anything happens to Mrs Peel, there'll be a fifth.

Still, I like the lazy eccentricity of Needle's den, and his cheerful shamelessness ("I’m a natural born parasite"). His wacky demise, though, blown up by Unwin’s bomb such that he ends up in a tree, is most peculiar, such that I couldn’t be sure if he was supposed to be dead or not (Emma and Steed laughing ha-ha at a corpse doesn’t seem quite right, any more than the possibility that he'd have survived the blast. Then again, I don't know why I'm trying to apply any degree of logic). The ending, with Steed pronounced a "self-made halfpenny millionaire" thanks to a final ha'penny from Emma, isn't exactly roll-about, but like the episode itself, the gag is well sustained. 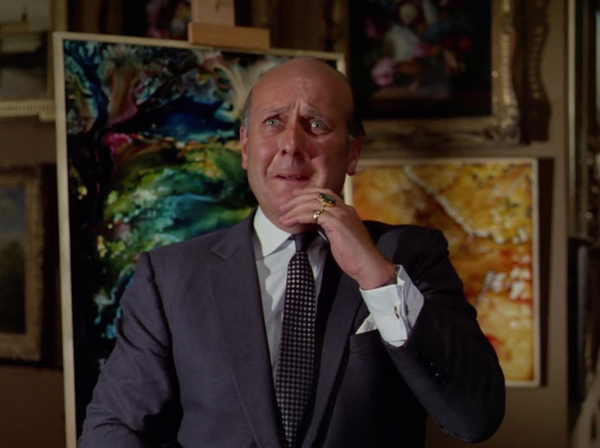 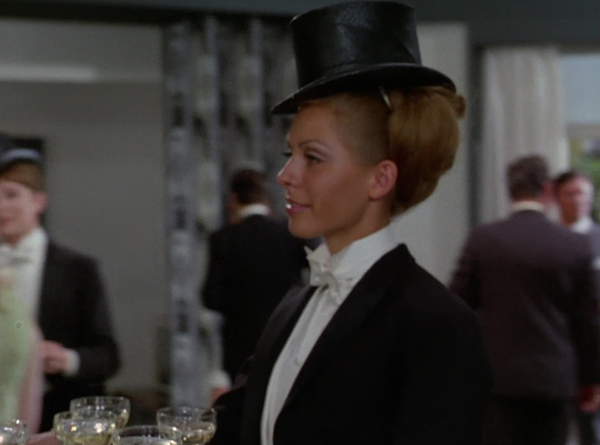 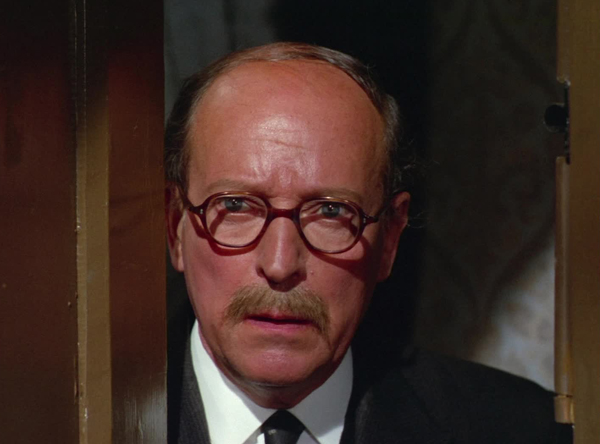 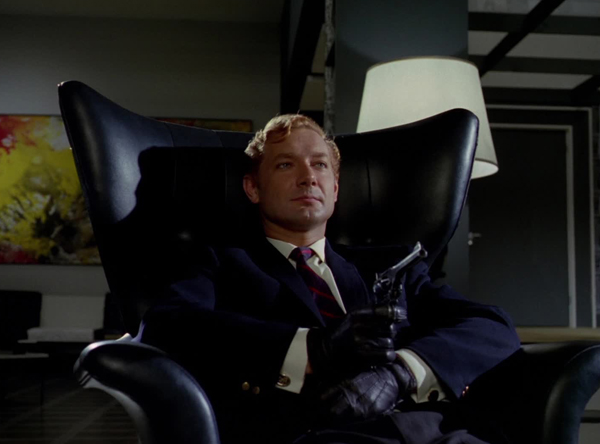 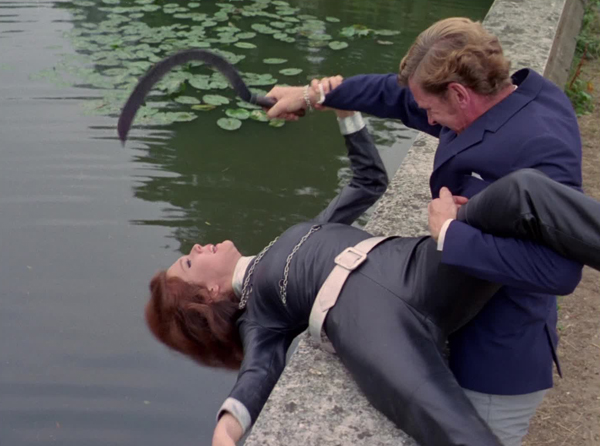 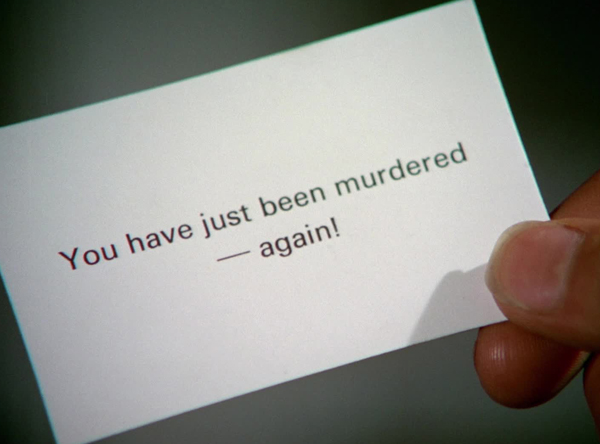 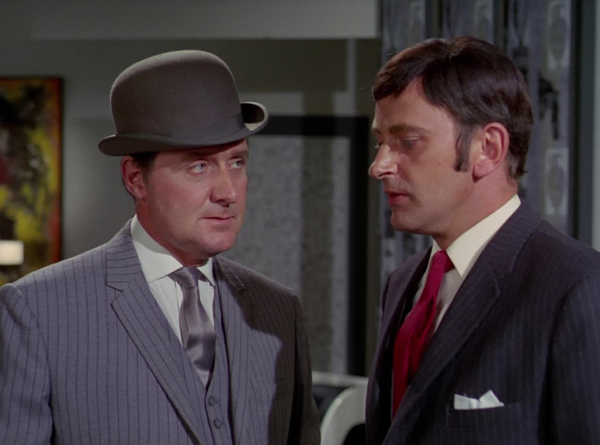 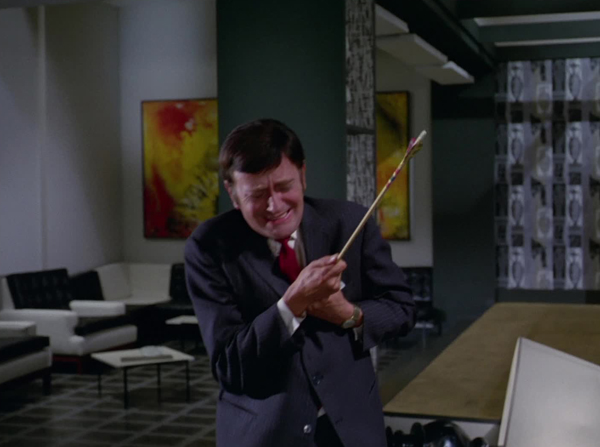 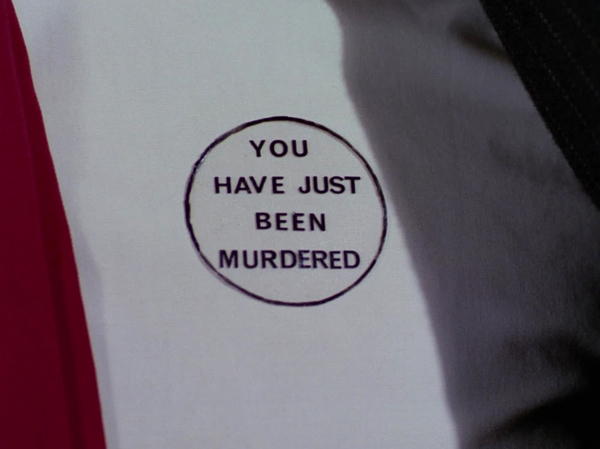 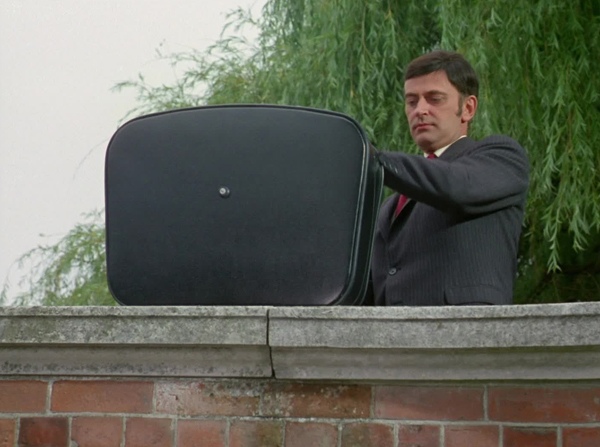 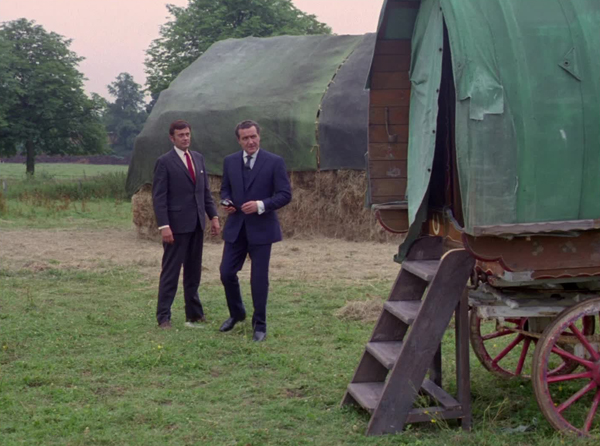 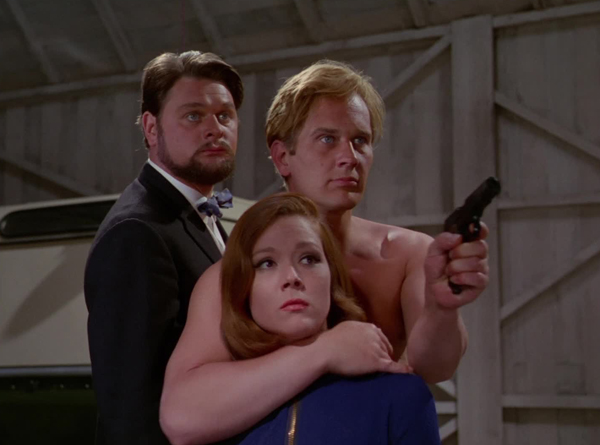 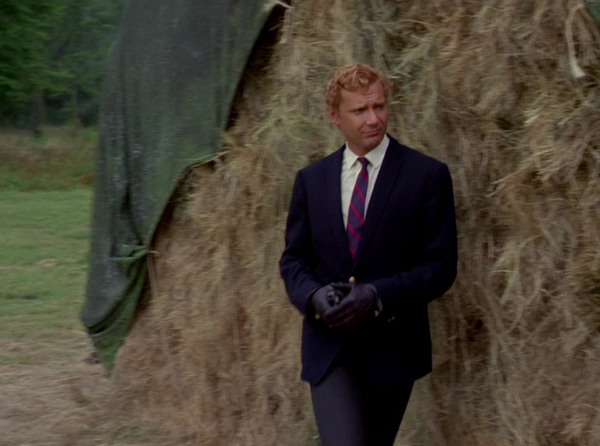 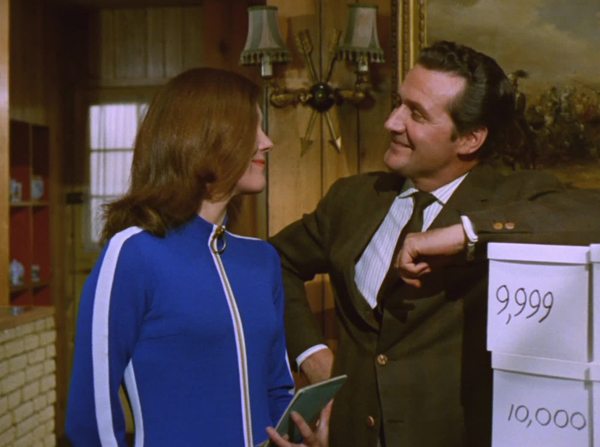