All in favour of Chief fighting the robot dog, say ay. 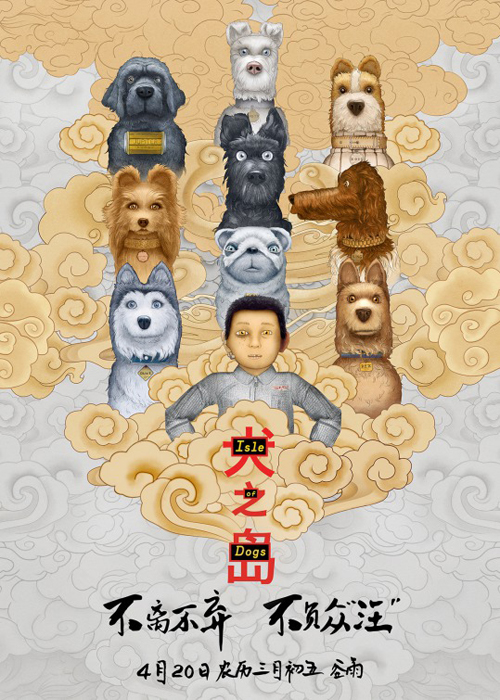 (SPOILERS) I didn’t have very high hopes for Isle of Dogs. While I'm a big Wes Anderson fan, give or take the odd picture (The Life Aquatic just doesn’t do it for me), the trailers almost felt like they were intended as a patience-testing parody of his quirky tableau style. Plus, I wasn't enormously keen on The Fantastic Mr Fox, although that may just have been my wanting a respectful adaptation of Roald Dahl's story, rather than one Wes'd up to the max. Yet this, his sophomore animation, is as a very pleasant surprise. Perhaps because it allows him free rein, without impressing himself on someone else's material. Most of the criticisms aimed at the picture have some validity, but they're very much outweighed by its significant merits.

Devised with regular Anderson collaborators Roman Coppola and Jason Schwartzman, and Kunichi Nomura, who appeared in The Grand Budapest Hotel, the director's idiosyncratic story idea and setting – a near-future Japan in which an attack of "snout fever" among the dog population has seen them exiled to Trash Island, where they must fend for themselves – provides a canvas to explore typically oddball characters, the majority of whom are of the canine persuasion.

Indeed, the humans barely get a look in, aside from the resolutely impassive Atari Kobayashi (Koyu Rankin), nephew of the mayor out to rescue his guard dog Spots (Liev Schreiber), and Tracy Walker (Greta Gerwig), the solitary white protagonist out to prove a conspiracy in operation. There's also a Boris Karloff-alike villain, Major Domo (Akira Takayama), who seems to look like that apropos of nothing.

Anderson commented of overlaying the political real world onto various themes in the picture ("Every day we were working on this movie we’d see something in the newspaper and we said, 'that is what we’re writing about'"), but really, most of these elements, of corruption/corporate control, immigration, scapegoating, inhumane imprisonment and torture, don't need the current global environment to resonate, and arguably only the immigration one feels trenchantly of-the-moment. I was put in mind at points of a less terminally-depressing The Plague Dogs, in fact, one with a sense of humour and, if not sunny, an upbeat disposition.

It’s been suggested that Anderson's curious, hermetic world building has on this occasion exposed a degree of perhaps not prejudice but white privilege ignorance, through his aforementioned decision to feature a white saviour who galvanises the undemonstrative Japanese. Then there's also that the (oppressor) Japanese are portrayed in their own language while the (oppressed) dogs speak English. While I can certainly see the reasoning, such a conclusion seems motivated to highlight the filmmakers' choices in the worst possible light; it's a movie designed principally for an English-speaking audience, so Anderson required non-English speaking humans to carry his conceit of identification with the mutts first and foremost. As for the national stereotyping on display, that's more symptomatic of the way cartoons/comedy always go (broad strokes); it comes across as fairly innocuous in this instance.

To be honest, I was more concerned by the potential prejudice against cats, since the nefarious politicians are all seen with cats beside them, and that this would be another anti-feline screed (see also Cats and Dogs). Anderson did, after all, mutilate a moggy with something approaching savage glee in The Grand Budapest Hotel. Fortunately, they aren’t revealed as being behind the entire plot, and Anderson attests that Coppola at least is a cat lover (Anderson remains in between and Schwartzman is a dog hound).

Mostly, what makes Isle of Dogs irresistible is the interaction between these noble, heroic hounds, with fine vocal performances courtesy of the Anderson repertory (Ed Norton, Bob Balaban, Bill Murray, Jeff Goldblum, Fisher Stevens, Harvey Keitel, Tilda Swinton) as well as a several notable additions, chiefly Bryan Cranston as Chief and Scarlett Johansson as Nutmeg (as with Her, she's a much more effective performer when you can't see her perform). Anderson being Anderson, there's a great deal of drollery, as well as sudden violence ("Sheesh, Igor. I think he chewed your ear off"), such that when Rex, Boss, Duke and King enter a trash compactor, it's entirely feasible that they really are about to be killed off. Keitel gets one of the best, most affecting moments – also darkly comic – informing Chief why he's out of order to call the dogs at the Canine Testing Plant cannibals.

Where does this rank in the Anderson oeuvre? It's closer to the relaxed amble of Moonrise Kingdom than the firing-on-all-cylinders knockabout of The Grand Budapest Hotel, or the touching dramedy of The Royal Tennenbaums, but Anderson seems to be configured for producing slight pieces of work. It's how he tells them that counts, and Isle of Dogs is delightfully told.