I don’t catch wolves looking where they might be. I look where they’ve been. 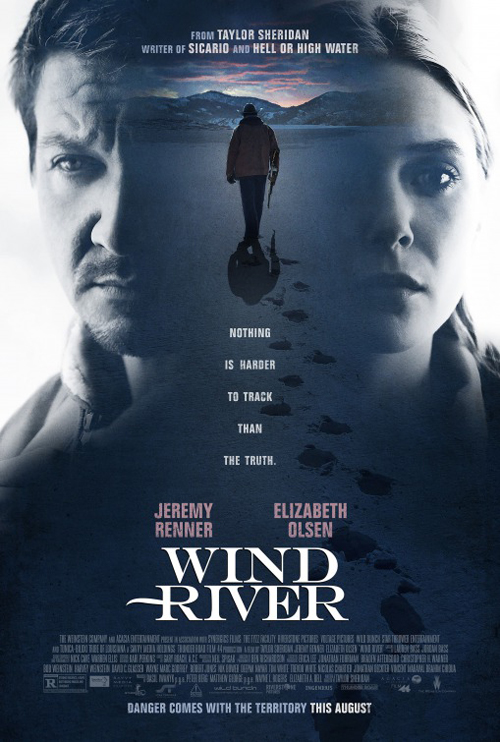 (SPOILERS) Taylor Sheridan's second feature as director sees him continue tapping a vein of political-toned genre writing that informed his two breakout successes, Sicario and Hell or High Water. He's a bit of a plodder as a helmer on this evidence, however, lacking the energy or flair Denis Villeneuve and David Mackenzie brought to those screenplays.

Indeed, barring a late-stage flashback scene informed by the bleak inevitability of the horror genre (it may not be a coincidence that his directing debut was a horror), Wind River is a measured, earnest affair, reflecting the importance Sheridan attaches to the subject matter; a title card informs us "Inspired by Actual Events" and leaves us with the sobering information that no missing persons statistics are recorded for Native American women. The picture revolves around the body of an 18-year-old found on the Wind River reservation, and it certainly seems noble enough of Sheridan to use his Hollywood status to highlight the issue (rather than, say, going back for seconds in the vilification of Mexicans stakes with Soldado; I couldn't help but be given pause by seeing Peter Berg's name on Wind River as producer, who with buddy Mark Wahlberg has become the Hollywood go-to for blinkered, feverishly patriotic flag waving).

It's curious, though – enough that many critics have pointed it out – that Sheridan raises a significant matter in respect of issues affecting Native Americans but doubles down on the white leads (Jeremy Renner's Fish and Wildlife service agent and Elizabeth Olsen's FBI agent) solving the case. This, despite Graham Greene being on hand as the Tribal police chief. The Native American characters are merely satellites to Renner and Olsen, and while Gil Birmingham stands out as the victim's father, they have little in the way of separate agency. Renner's really good at delivering the sensitive, seasoned guy thing, and Olsen is also solid as the Fed admitting to her unfamiliarity with the territory. Nevertheless, her looks can't help but add a veneer of Hollywood make-believe to the proceedings.

Sheridan has decried glorification of shootouts in movies, wanting to capture their suddenness and dirtiness, but the big one here still feels like an excuse for some elaborately-staged violence; that the oil company's security guards opt for a fight to the death with the FBI (amongst others) is a stretch in itself. And then there's the crowd-pleasing intervention of Renner doing a Hawkeye, but with a sniper's rifle rather than a bow.

The score from Nick Cave and Warren Ellis adds immeasurably to the mood, and Jon Bernthal dazzles in the aforementioned flashback, seizing what seems like a rare opportunity to play a straight-up good guy. Wind River's a solid piece of work, but without the stylings of a Villeneuve or Mackenzie it does rather feel like just another thriller, and one wonders a little if Sheridan's current stock is a little over valued for what he can actually deliver.