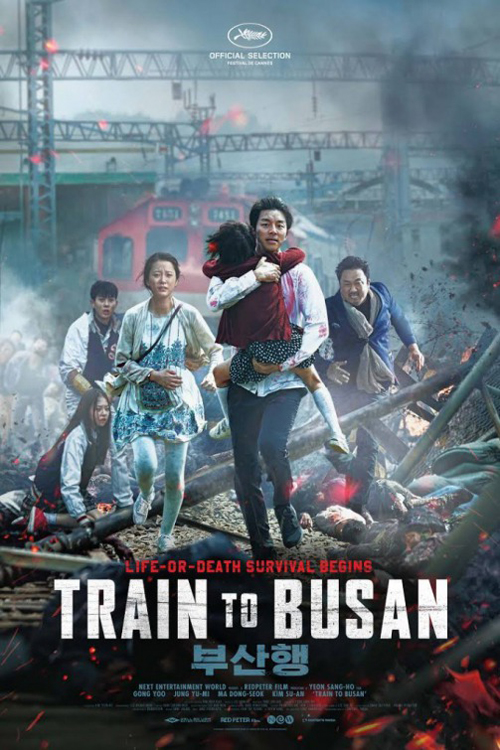 (SPOILERS) Perhaps I just had my expectations raised too high, based on all the praise lavished on Train to Busan, but this South Korean zombie flick, largely situated – surprise, surprise – on the titular train, is merely adequate. Sang-ho Yeon offers perfectly serviceable zombie action – albeit without the resort to freneticism so common in the US versions – but rather falls down when feasting on lumpen and obvious social commentary.

I can see why some have compared it to the also-clumsy Snowpiercer in that regard; both are set on a train, and both address socio-economic realities, although Busan at least looks relatively low-key when stood alongside Joon-ho Bong's sledgehammer didactics. It's a setup born of the economic crisis, with a fund manager (Yoo Gong) required to recover his soul as he takes his daughter (Kim Su-an) to see his estranged ex for her birthday. He never gets there, though, thanks to those pesky zombies (notably, he counts himself as responsible for their existence, having invested and then sold shares in the company at the source of the outbreak, a company operating inadequate safety measures). If that isn't enough to clearly establish where the movie’s moral compass lies, we also have an evil COO (Eui-sung Kim) intent on letting none of the stray passengers into "his" train car.

Fortunately, there's an average joe (Dong-seok Ma) and his pregnant girlfriend (Seong-kyeong) to provide us with genuinely decent sorts. He's heroic and selfless, taking issue with Gong's "every man for himself attitude" – which includes pointedly leaving the homeless to die; although, the movie itself characterises the homeless guy as expendable – until the latter learns there's more than just taking care of number one and the daughter he has hitherto neglected. She also calls him out for his self-serving behaviour, and is quite upfront about it to others. "He's a blood sucker. He leaches off others" says Ma. His girlfriend looks disapproving, but Su-an responds "It's okay. That's what everyone says".

As per the rules of these movies, loved characters as well as the loathsome ones must fall by the wayside. This lot of zombies have their own rules too, including responsiveness to movement, which means the uninfected can pass unimpeded through the train when it goes through tunnels. Yeon stages some particularly effective moments – the army, due to offer safe harbour, turn out to be infected at Daejeon station; pursuing zombies forming a bridge of bodies, clinging to the back of the train as it departs. The train eventually arrives with only the innocents intact – the daughter and the pregnant wife – further evidence that it's a deeply conformist text. Easy to see why remake rights have been snapped up, since it has a structure that essentially tells itself, and why, besides the animated prequel, a sequel is on the cards (it grossed $88m worldwide). No doubt it will be every bit as incisive in its political critique.