Well, you did take advantage of a drunken sailor. 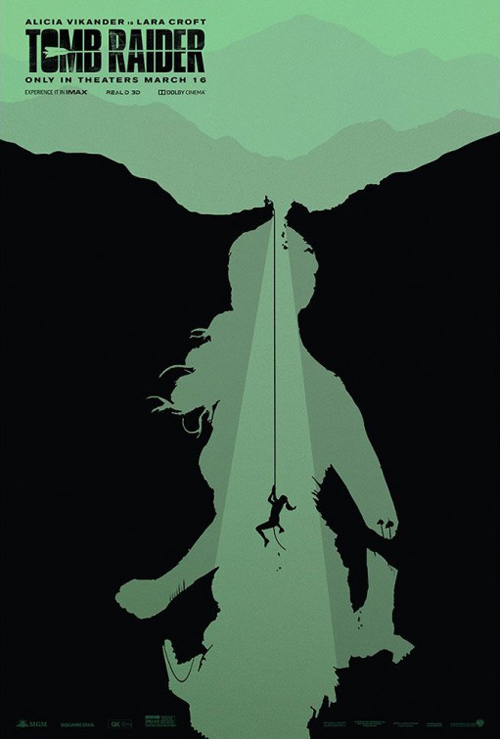 (SPOILERS) There's evidently an appetite out there for a decent Tomb Raider movie, given that the lousy 2001 incarnation was successful enough to spawn a (lousy) sequel, and that this lousier reboot, scarcely conceivably, may have attracted enough bums on seats to do likewise. If we're going to distinguish between order of demerits, we could characterise the Angelina Jolie movies as both pretty bad; Tomb Raider, in contrast, is unforgivably tedious.

For some reason, a more down-to-earth approach was chosen for this Lara Croft (Alicia Vikander) origins story, perhaps because they thought it would be cheaper? Which means that the most exciting sequence is a bike chase – that's a bicycle chase – in the first ten minutes. And it isn't very exciting.

Daddy (Dominic West) disappeared years earlier looking for the tomb of a Japanese queen said to have power over life and death, but you just know he isn't really dead (yet), so once Lara washes up on the island of Yatami she gets to divide her time between Walter Goggins' tediously generic bad guy and a slightly gone-to-seed Lord Richard Croft.

Roar Uthaug directs his English language debut in uninspired, underwhelming fashion, and in that regard, he's matched by Vikander's performance. On this evidence, she may be an Oscar winning actress, but she isn’t a star who can take up any slack when the screenplay fails to deliver. Tomb Raider's a hollow movie with a bland lead and a bland villain; West is serviceable as dad (he almost adds feeling to his parting "Chin up, sprout. There's jobs to do") but not enough to distract from the general torpor. The same with Kristin Scott Thomas, bookending the movie and set up as the villain next time round, if there is a next time.

Eventually, there's an actual tomb to raid, during the course of which Lara must dodge a selection of CGI traps and outrun some falling CGI masonry, which is about as thrilling as that sounds. There are some zombies too, but they're fairly pedestrian as such sub-humans go; the queen's corpse carries an infectious pathogen that transforms anyone unlucky enough to touch it into a gibbering monster. Goggins is duly made to swallow her finger as Lara kicks him into a crevasse with the unconvincing cry "You messed with the wrong family!"

One might ask how a no-brainer concept like Tomb Raider could be continually messed up like this. It isn't as if it needs to fall victim to the curse of the video game adaptation, as its premise is fairly translatable; if you think female Indiana Jones, you oughtn't to go too far wrong. On the other hand, there's Kingdom of the Crystal Skull to prove the one everyone wants to copy can mess up just as badly. No one's counting on also-Indy-ish Uncharted changing that, particularly if it still has Tom Holland in the lead when it finally limps to the screen. If Vikander does come back for a sequel, the makers desperately need to repurpose Lara as someone an audience actually wants to spend time with. It isn't enough that she's posh, female and runs a lot.