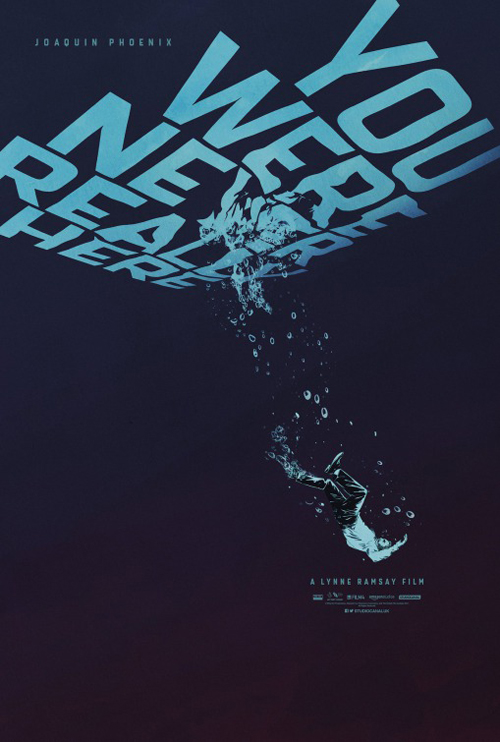 (SPOILERS) I haven't been fully on board with a Lynne Ramsey film since Morvern Callar, and I have a feeling that one would somewhat suffer from a revisit. Of course, there's only been one feature between that and this, 2011's We Need to Talk About Kevin, which evidenced in abundance her virtuoso filmmaking skills but left me less impressed by its horror/comedy impulses. There's a similar mutton-dressed-as-lamb quality to You Were Never Really Here; sterling lead performance, masterful direction, but in service of a screenplay that wouldn't be out of place in a Stallone movie.

They way some would have it, that seems to be the point, that the picture utilises the tropes but denies the catharsis of its mainstream forebears. But Ramsey, who wrote the script based on Jonathan Ames' novella, is able to inject little in the way of the resonance that suffuses Taxi Driver, with which it has been frequently compared. Joaquin Phoenix's PTSD-suffering vet Joe is the stuff of cornball cliché, a burly saviour of trafficked girls – he's a violent man whose violence is on the side of the angels – haunted by memories of his abusive father and his time in Iraq, who returns home each evening to tend to his elderly mother. Simply being a very good director and getting a very good actor to headline doesn't automatically transform those elements into creative gold.

Indeed, in a ninety-minute movie, the first third of You Were Never Really Here mumbles along as if its laying important groundwork, which then fails to pay off. Ramsey isn't that interested in genre conventions, even though they fuel this kind of exercise, but that should mean she's exploring character instead. Except there isn't much to explore. Joe’s protector relationship with Nina (Ekaterina Samsonov) doesn’t evolve beyond the level of broad strokes, even given her agency to ultimately protect herself and offer him the possibility that if she can see that "It’s a beautiful day" then so can he (which seems somewhat unlikely, and for all the indie cred here, seems exactly the kind of spin a typical Hollywood version would give her).

The picture nurses some interestingly retrograde impulses in its characterisation of conspiracy yarns, however, given the current atmosphere is one where they're only sanctioned if they're the right kind of conspiracies (ie Russia's behind them). Joe is paranoid about having his cover blown, telling his handler (John Doman) as much, and he's proved correct when government agents kill his associates, including his mother. What’s more, the government is implicitly stuffed full of state-sanctioned paedophiles getting up to whatever they like, with only one righteous man with a mighty beard standing against them.

We've seen most of the elements here in its mainstream cousins, often featuring Denzel Washington (Man on Fire, The Equalizer), right down to visiting the hardware store for tools with which to ply his deadly trade. All the reviews reference the scene in which Joe takes the hand of the dying agent who has just tried to kill him, together singing along softly to a cheesy song on the radio, as evidence of Ramsey's craft and distinctiveness. But, while the scene's arresting, it's also supremely affected, almost as if she's looking for a moment where you can say "This isn't what you'd get in a Hollywood actioner". Does Joe show empathy because the guy shot his mother in her sleep rather than making her suffer? Or does he lie next to the assassin breathing his last because, in its own way, it's as "cool" as shooting him full of lead in glorious slow motion?

Ultimately, Phoenix's efforts to perform detail for Joe feel laboured. You know Travis Bickle even though you know next to nothing about him. Joe's a cat person who reproves his mom for watching Psycho alone in the house at night and he loves green jelly beans; it's close to a sendup of the kind of character crutches demanded by method actor, and the inversion that is the (sturdy) child caring for the fragile adult is as much of a cliché as the ones Ramsey is attempting to trample. Joe's still a kick-ass killer, he still wears the heroic malaise of the tortured child who becomes the righteous executioner. And the final hopeful line is still trite, whichever way you wash it.

That Freud stuff’s a bunch of hooey.

June 10, 2012
Spellbound (1945)
Spellbound is something of a stumbling follow-up to Rebecca, producer David O Selznick’s previous collaboration with Hitchcock. Selznick was a devotee of psychoanalysis, and the idea of basing a film on the subject was already in the mind of the director. To that end, the producer’s own therapist, May Romm, was brought in as a technical advisor (resulting in Hitchcock’s famous response when she pointed out an inaccuracy, “My dear, it’s only a movie”).

August 11, 2020
Star Wars The Saga Ranked
This is an update of my 2018 ranking, with the addition of highly-acclaimed The Rise of Skywalker along with revisits to the two preceding parts of the trilogy. If you want to be generous and call it that, since the term it makes it sound a whole lot more coherent than it plays.
Post a comment
Read more