Once you get a real taste of the bitch at work, there’s only one thing you’re gonna be able to see, and that’s fuel. 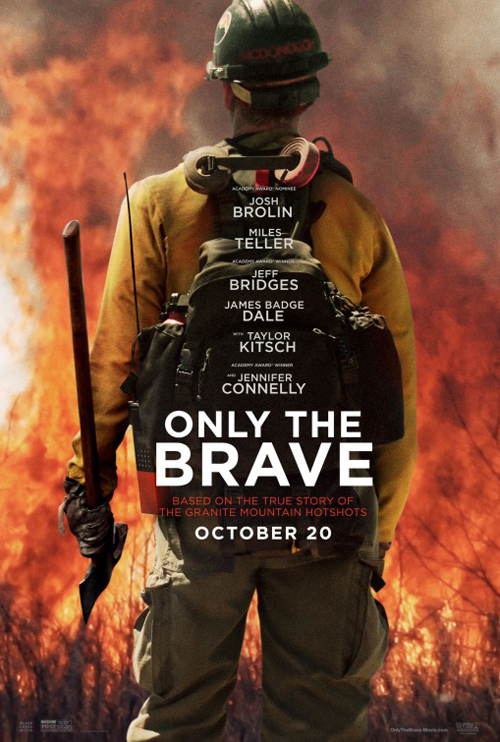 (SPOILERS) This firefighter movie, based on the 2013 Granite Mountain Hotshots tragedy (Only the Brave was originally called Granite Mountain, which is more memorable and much less generic than what we got) is a curiously ungainly affair. The main body of it, the "assemble the team, train the team" wouldn't look out of place in your averagely formulaic Jerry Bruckheimer flick, while the event itself is rather perfunctory, in the sense that it rather suddenly overtakes the men; there's little of the build-up that one might expect. Indeed, one wonders if the makers seriously considered the story's cinematic potential beforehand.

You can certainly see why Joseph Kosinski was handed the keys to Top Gun: Maverick (aside from being pals with the Cruiser, that is), since the trainee section of that picture will doubtless cover similar tropes. Including Miles Teller, here as the ex-junkie who proves his worth and by luck is the only one to get out alive; he plays Goose’s son in the Top Gun sequel. Teller is standard Teller, good at playing someone difficult (dislikable), less resonant when trying to mine for sympathy.

The rest of the players are serviceable as stock types; Josh Brolin as the experienced super trying to get his crew certified as hotshots, with the support of Jeff Bridges' city fire chief. The latter, besides playing the guitar in one scene, is a very straight authority figure type; while he has little to get his teeth into, he makes the necessary adjustments. However, it's interesting to see the pair together, as they do seem like they've known each other forever (True Grit wasn't perhaps the best vehicle to study their rapport). James Badge Dale is, as usual, really solid in an underwritten part. Taylor Kitsch plays a bit of a dick. Most of them have moustaches. Jennifer Connelly doesn't, but lends conviction to some hackneyed partner/family/"When will you come safely home?" beats as Brolin's wife, and Andie MacDowell is there. Just about.

Firefighting movies have a patchy history. The most prominent, Backdraft, had the benefit of lots of burning buildings to run out of, but even with a daft Hannibal Lecter serial arsonist plotline couldn't really sustain interest. Kosinski and writers Ken Nolan (Black Hawk Down and Transformers: The Last Knight, both of which should ring alarm bells) and Eric Warren Singer (The International, American Hustle, Top Gun 2) – basing their work on a GQ article –arguably do the necessaries showing the discipline and camaraderie between these men, but it isn't like we haven't seen it done before, or the underdog needing to prove himself, and much better. It's notable too that there's relatively little actual firefighting here, which isn't a Backdraft style visceral viewing experience anyway; movies like this usually build to the rookies-in-action moment, but in this one, when they come, the nature of their discipline tends to work against standard dramatics.

As for the portrayal of real tragedy, there's a danger it can be used as a ploy to garner instant respect and reverence, when it’s the writing and characterisation that should be doing that. Most of what we see here concerns real men being real men and rhetorical statements like "If this ain't the greatest job in the world, I don’t know what is". I’m a fan of Kosinski's other movies (the guy gets a lot of stick, but he's a great visualist), but he probably wasn't the best choice if the makers wanted to get under the ensemble's skins and elicit emotional resonance.