You have no animality. 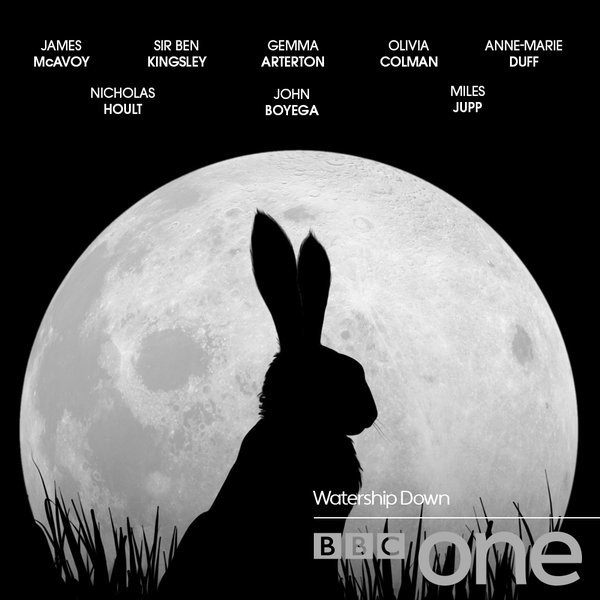 (SPOILERS) To call the BBC's animated mini-series a travesty would be giving too much credit to its anaemic failure to capture the poetry, majesty and melancholy of Richard Adams' novel. It's simply inept, from the shockingly basic CGI animation – it's astonishing this was deemed acceptable for primetime broadcast, and likewise that the usually ostentatious Netflix should have attached its name to something so threadbare – to the underwhelming voice cast – evidence if it was needed that simply being a name actor doesn't necessarily mean your larynx is an instrument of lustre – to the pervasive lack of atmosphere and mood. That these resounding failures can't entirely ruin Watership Down is only down to the sheer quality of the source material, such that even in this sorry state the story engages.

One has to assume all involved were duped by the animation studio's amazing results foretold that came to nowt, particularly credited director Noam Murro, whose 300 prequel/sequel suggested he knows how to get the best from a virtual canvass. Tom Bidwell's the credited writer, previously of various soaps, and little of the power of Adams' text rings through in his finished screenplay. Indeed, of the various production elements, it’s only really Frederico Jusid’s score that does the book justice, at times eliciting an emotional response that simply isn't sustained by the images and performances.

Yes, the performances. Admittedly, I'm going by how highly I rate the 1978 film, which I'd never suggest couldn't in theory be bettered (in terms of the prospect of making a fuller version of the novel) but is pretty damn perfect in encapsulating is essence, but every vocal artist's efforts there rang true and were duly affecting. Most of the cast here appear to be sleepwalking through their roles. Be it James McAvoy (Hazel), John Boyega (Bigwig) or, dare I sat it Ben Kingsley (Woundwort), not one of them remotely measures up to the gravitas brought by those in Martin Rosen's feature. Probably the best is Nicholas Hoult as Fiver, but he's no John Hurt. And sometimes the creative decisions are just bizarre, such as Peter Capaldi’s Keehar, now a sarcy Scots bird rather than a confusing European one, and losing much in the lack of lack of translation.

The adaptation appears to be set in the 1970s, judging by the visit to the farmhouse, but the design is so basic and rudimentary, you'd be hard-pressed to come away with any stylistic perspective. Any opportunities for visual flights, such as tales of El-Ahrairah or Fiver's visions, are resolutely pedestrian (and in the case of the former, informed by Rosen's film, but without the spark). One only has to look at the lack of impression made by the feeble rendering of Woundwort – compare him to his imposing 1978 self – to encapsulate how lacking the efforts are. Occasionally, there's a pulse to the proceedings – a solid fox chase, the sequence with the train, the escape on the greenhouse – but none of it ever looks very good.

Nevertheless, I have to admit I was caught up in Fiver's final scene with the Black Rabbit (Rosamund Pike), even anaesthetised for the kiddies as it was. In that vein, I could go on about how eviscerated Murro's version is of anything remotely disturbing, but by now you probably get the idea. The makers have entirely failed to rise to the challenge of one of the best adult/children’s novels (it straddles the line, in that it is usually first read by the latter by default), an outstanding piece of work on so many levels. We probably won't see another version for another forty years, so my advice is to stick with the film. It won't disappoint, and you’re guaranteed to cry buckets, rather than weep for the paucity of artistic ability.