No one ties down this Batman forever. 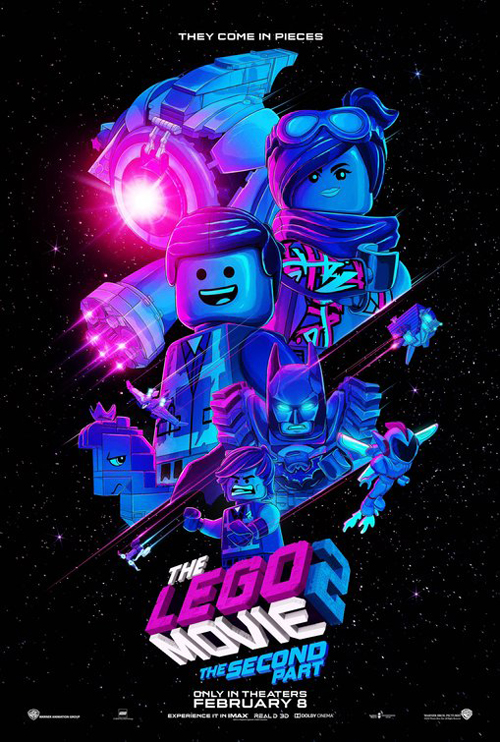 (SPOILERS) The Lego Movie 2: The Second Part isn’t very good. Which is to say, it’s just about passable – nothing more, so don’t take the equal and opposite tack and interpret that as effusiveness – until the last twenty minutes, when it opts to become actively objectionable in its efforts to patronise and consequently provoke children (and hopefully their parents) everywhere into states of abject wrath. The fact that Phil Lord and Chris Miller penned the screenplay should, by rights, cause any rational person to question every positive impression they hitherto had of the duo.

The first Lego Movie was also partially infected by nauseatingly unnuanced messages (about rekindling one’s inner child and such like), but the worst damage was averted by fairly limited – even limited is much too much, though – live-action sequences and the sensible game plan of never straying too far from a gag in the main text, as replete with unbridled positivity as it was (even then, The Lego Batman Movie was far superior for mostly avoiding such eggy bread). Here, there’s no escape. Even in the animation.

Aside from the self-mockery of Batman (Will Arnett, as hilarious in delivery as ever), there’s precious little in The Lego Movie 2 to distract from its pungent antiseptic streak. Attempts at movie parody seem rather tired when the best they can come up with is an extended Fury Road riff, four years past its sell-by-date (the teen boy of the household is into his dystopian Lego visions, hence Apocalypseburg), contrasted with the sweetness and light, first characterised with suspicion, of his younger sister’s Duplotopia as overseen by Tiffany Haddish’ underwhelming Queen Watevra Wa’Nabi (set on marrying Batman, a scenario that elicits a few decent lines, but Batman can’t ultimately save it); the twist in the tale is that there is no enemy, and the only enemy is within us (Emmet’s alter-ego, Kurt Russell-alike Rex Dangervest, turns out to be future Emmet arriving via a mildly amusing time-travel movies referencing conceit. And being trapped under the fridge).

Naturally, there are sufficient digressions that this isn’t a complete washout. Bruce Willis – is he about to undergo a Bruce-naissance? No, probably not, but at least he’s laughing at himself. A bit – plays a bald, John McClane Bruce in two scenes, while Jason Momoa voices Aquaman. There are songs too, of course, with Everything is Awesome inevitably reprised, and new Catchy Song being exactly what it says in the title, without ever being as earwormy as Awesome.

None of this can offset that there’s something deeply off-putting and aesthetically egregious about the digression into live action as teen Finn destroys his sister Bianca’s Lego works. It’s a scenario so entirely lacking in imagination and artistry, delivered with a sledgehammer absence of anything approaching competent writing, devoid of subtlety, humour or wit, it renders the entire Lego cinematic project of questionable merit.

There was debate anyway, following the diminishing returns of The Lego Ninjago Movie, that the big screen franchise had legs, and the decision to double down on the sentiment rather than amp up the yuks has likely crippled it further. Quite possibly, we won’t see The Lego Movie 3. Most likely, it will limp into existence in the same way Look Who’s Talking Now arrived to no one’s bated breath. No infant ought to be screaming to go and see another Lego outing after being subjected to such abhorrent demands on their deeply-buried-until-adulthood positive feelings towards their siblings.