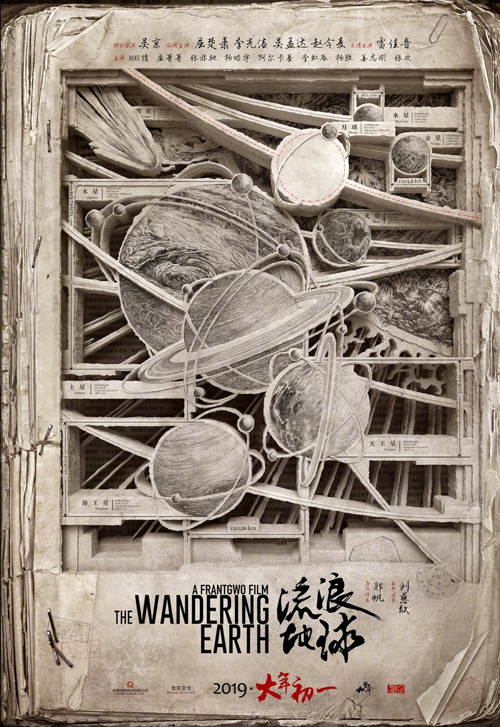 (SPOILERS) Proof that Hollywood doesn’t hold the monopoly on empty-headed disaster movies. The Wandering Earth is currently the third-biggest movie of the year globally (99% of receipts were sold at the Chinese box office, however) and China’s second-largest homegrown hit ever, but as Titanic proved, a guarantee of quality in no way comes as part and parcel of such spectacle. Director Frant Gwo is a huge fan of James Cameron, but it’s Armageddon you’ll be thinking of here – only even bonkerers – complete with absurd Bay-hem style CGI action that only gets dafter as the daftness escalates. And a prerequisite comic-relief Cosmonaut (Arkady Sharogradsky).

One shouldn’t get the wrong idea from the inclusion of a slightly eccentric Russian, though; I’d like to report a whole raft of fun characters littering The Wandering Earth, but it mostly takes its leaves out of the Irwin Allen stock-type book, the one Roland Emmerich would later be thumbing through for about a decade and a half, before he went all Shakespeare on us. Yes, Gwo features a sequence – about as tense as The Wandering Earth gets – where a couple of supporting players struggle for possession of a space helmet that hasn’t been vomited in, but you aren’t going to come away thinking this was a laugh riot.

Although, you may not be able to contain a succession of derisive snorts and sniggers at the premise itself. The plot of The Wandering Earth is almost jaw-dropping in its insanity – God knows what brand of mushrooms the four scientists acting as consultants on the project were scoffing – as we learn the Sun is rapidly degenerating and expanding and will engulf the Earth in a hundred years. With this in mind, a plan is hatched to move Terra to a new home four light years away, which will involve stopping its rotation (thus creating massive earthquakes and tsunamis), the surface temperature dropping to minus 70 degrees, and the population who win a survival lottery – about 3.5 billion – descending five kilometres below the surface to inhabit a Blade Runner-lite set. Oh, and installing 10,000 engines on the Earth’s surface, with which to propel the planet through the void.

The amount of detail goes to underline rather than diminish protestations of how lunatic the scheme is; Doctor Who has had its share of nonsensical planetary perambulations – the Cybermen’s home world (Earth’s long-lost twin) drifting through space, the Doctor pulling the Earth back to where it should be with the TARDIS, the Daleks extracting the planet’s magnetic core and replacing it with a drive system in order to pilot it anywhere in the universe… actually, that last one ismassively unhinged – but nothing like this. Curiously, though, whereas one can quite imagine Emmerich or Bay depicting the daredevil feats necessary to set this plan in motion, Gwo’s (with six other writers) adaptation of Liu Cixin’s novella cuts to seventeen years later and the difficulties that ensue when the Earth encounters Jupiter’s gravitational spike and the much much larger planet begins pulling the smaller towards it.

To personalise all of this, there’s a family unit amid the military operations, with grandad Han Zi’ang (Ng Man-tat), grandson Liu Qi (Qu Chuxiao) and his adopted sister Han Duoduo (Zhao inmai) trying to survive a series of perilous episodes (translation: dodging lots of CGI ice and debris in a CGI truck) while dad Liu Peiqiang (Wu Jing) does his duty on the international space station. Except that dad has to deal with a “rogue” AI (MOSS even has a HAL-like camera eye) intent on leaving Earth to its fate (the station has its own space ark of 300,000 embryos to ensure humanity’s survival).

Weta provided the movie with its physical props and spacesuits, so that side exhibits a degree of grounding, but so much of The Wandering Earth is a wash of indifferent CGI interacting with itself (the budget is reported at $50m on Wikipedia, and I can believe it’s that low), with a few impersonal humans thrown into the mix, that it’s an uphill struggle to engage with anything that occurs. The last half hour in particular is a succession of shouting and running and driving and dying that merges into an indistinguishable melee of aural and visual inanity. Reviews appear to have been generally kind to the movie. Too kind. I’ll say this, though: the poster’s really good.