I mean, I think anybody who looked at Fred, looked at somebody that they couldn't compare with anybody else. 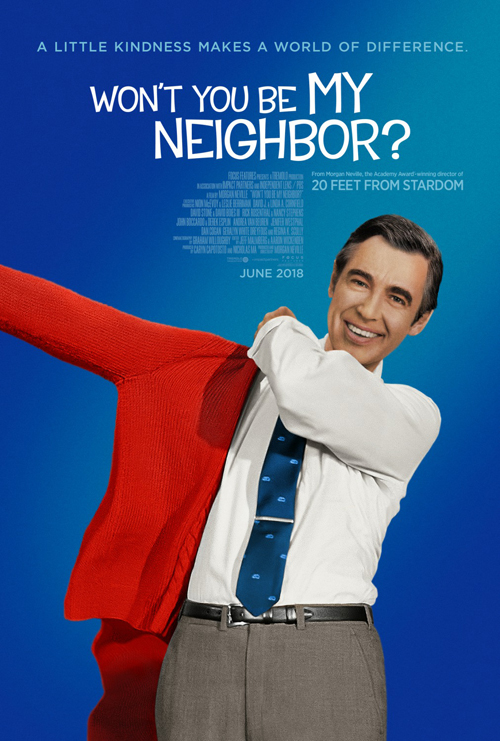 (SPOILERS) I did, of course, know who Fred Rogers was, despite being British. Or rather, I knew his sublimely docile greeting song. How? The ‘Burbs, naturally. I was surprised, given the seeming unanimous praise it was receiving (and the boffo doco box office) that Won’t You Be My Neighbor? didn’t garner a Best Documentary Oscar nod, but now I think I can understand why. It’s as immensely likeable as Mr Rogers himself, yet it doesn’t feel very substantial.

Perhaps that’s a reflection of its subject’s simple, straightforward values and intentions, but there’s a limit to the number of ways you can stress that he was a genuine man genuinely trying to make a modicum of difference where he could; even the attempts to come up with some, if not controversy then straying slightly from the sunshine-and-rainbows image of the man, are rather wanting. There’s Roger’s employment of François Clemmons on Mister Roger’s Neighborhood, but his stipulation that Clemmons didn’t disclose his sexuality (this counterweighted by Clemmons’ primary importance as an identification figure in terms of racial integration as the two shared a paddling pool); really, though, what degree of progressiveness would one realistically expect from an ordained Christian minister and lifelong Republican? in many respects Rogers’ attitudes come across as positively liberal. Certainly, the flip-side, in which naysayers suggested he was evil for endorsing the idea that everyone is special so they grew up believing they didn’t have to bother – thus, if you can credit it, ruining an entire generation; presumably this viewed hailed from the same general party political spectrum as Rogers himself – doesn’t really stand up to any kid of scrutiny.

There’s a familiar sense in watching the doc of a keenly socially-minded individual struggling to broach important subjects in an accessible, comprehensible and responsible manner (through the medium of hand puppets) via his particular calling to kids (“He realised that, if he really wanted to communicate, the most important thing is to listen”). But one has to wonder how many of those watching, immediately following Bobby Kennedy’s assassination, really needed to understand what an assassination was and how much of this was Rogers projecting his own anguish; if he’d done a show on nuclear fallout – he did, in 1983, but it seems he didn’t actually mention the nuclear word itself, which might make it that bit too oblique – it might have come closer to the kinds of thing that really freaked out a young mind, rather than, say, the Challenger disaster. He came briefly out of retirement following 9/11 to record some addresses, but admitted “I just don’t know what good these are going to do”, as if society’s relentless downward trajectory had finally got to him.

For me, the most fascinating part of the doc comes when Rogers appears before a senate committee looking to cut PBS’ funding; up until that point, it appeared that losing it was a fait accompli, but the footage shows Rogers’ from-the-heart statement and the genuinely affected response (“I think it’s wonderful. It’s wonderful. Looks like you just earned the twenty million”). It’s all the more impressive for seeing a stony-faced arbiter actually listening to Rogers’ words, and not responding with the expected cynicism.

There’s also the occasional comment from one of his sons about growing up in the shadow of someone who was “almost a second Christ as a dad”, the various parodies (Eddie Murphy’s appears affectionate, and apparently Rogers only objected to those that were “making fun of the philosophy” of the show), the questions about Rogers’ own sexuality (presumably owing to his somewhat fey manner), his interaction with a gorilla that signed her love for him, and the most bizarre myths (that he was a Navy SEAL). All of it boils down to: “The universal question about Fred is, was he that way in real life. And the answer is yes”.

Rogers’ quiet war against the corrupting influence of other children’s TV (prime clip culprits include Transformers and Ren & Stimpy), whereby stopping and taking time amid the accelerating pace all around is not only valued but prized, isn’t an entirely isolated example, but it’s one in very short supply. Won’t You Be My Neighbor? is, necessarily, a bitter-sweet documentary, pointing to someone raised on a pedestal and implicitly suggesting that we have not only fallen a long way from such heights, but also have no hope of even aspiring to such standards, let alone meeting them. This, despite the remonstration to do not what Fred Rogers would do, but rather ask the question “What are you going to do?”