If anyone knows how to take on a slugger like Drago, it would be Rocky. 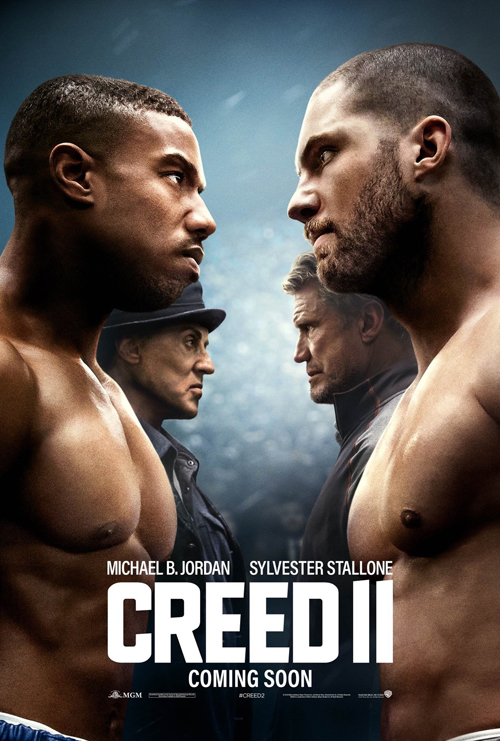 (SPOILERS) It wouldn’t be such a bad thing that this is a by-the-numbers, Stallone co-scripted sequel – after all, part of the pleasure of sports movies is their adherence to tried-and-tested formula – if only it had been made with a degree of evident enthusiasm. The (Sly-directed) follow-ups to the original Rocky weren’t exactly artful, but they knew how to rouse their audience. Creed II can’t even get the training montage right.

And there’s a problem using the Rocky theme (one the director seemed to acknowledge); by all means make Creed his own thing and use as few call-backs as possible, but if you do throw it in there (it appears early on), the audience will expect it to come back stirringly, especially with strains of the theme used throughout. Bottling it at the crucial juncture means the build-up can only lead to an underwhelming finish.

That kind of faltering occurs throughout Creed II, though, with Juel Taylor and Stallone going through the motions of giving an Michael B Jordan’s Adonis an arc (dilemmas over self-doubt, moving to LA, mixed-up motivation, fatherhood issues, mentor problems) but forgetting to make him sympathetic with it. He wins the title at the beginning of the movie, then suffers a humiliating defeat to Viktor Drago (brick shithouse heavyweight boxer Florian Munteanu), but doesn’t do enough to earn trouncing the Russian in their subsequent return match.

Indeed, as disappointingly undernourished as the characters of Ivan (Dolph Lundgren, an always watchable performer, and with this and Aquaman, hopefully he’ll continue to be granted the occasional release from his low-budget actioner dungeon) and his son are, their relationship is still more affecting than anything between Rocky and Adonis. Turns out Ivan was rejected by his country following his ‘80s defeat and is thus motivated to make junior a champ; junior in turn is motivated by the thought of winning mum Brigitte Nielsen’s favour. None of which means very much until Ivan shows he really does care for his son deep down by stopping the second fight before Viktor gets slaughtered. And you know what? The moment actually packs a sorely-needed punch. Ultimately, though, it only serves to underline that, as much as these movies are the furthest thing from the cinematic equivalent of great literature, the ample scope Creed II had to explore contrasting generations facing ghosts of the past has been all-but squandered.

It’s ironic too, going back to the Rocky theme element, that the only time the picture conveys a sense of substance is when its cutting back to the melancholic twilight years of its now supporting ex-champ. Stallone plays the not-that-bright-but-full-of-no-frills-wisdom veteran better than probably anything else he’s done, but continually referring back to Adonis’ need for his mentor, and things only coming together for him when Rocky finally agrees to come back, further emphasises that the lead character hasn’t been allowed to stand on his own two feet (likewise, there’s more heft to Rocky’s reunion with his son, Milo Ventimiglia, than the intended payoff of Adonis going to Apollo’s grave with his family).

Still, enough of the necessary ingredients are in place that this could have been as enjoyable as the first Creed, if only director Steve Caple Jr had been up to the challenge. He fluffs the montages and throws the fights (the number of obvious pulled punches would break any dramatic tension in the ring, if he hadn’t entirely failed to energise the proceedings in the first place). There’s also a very daft bit where Adonis’ team parade to the ring with Bianca (Tessa Thompson) leading them in song. No doubt there’ll be a Creed III, and no doubt Stallone will be back too, but Creed II suggests a creatively-stalled franchise before it’s really got started.