She worshipped that pig. And now she's become him. 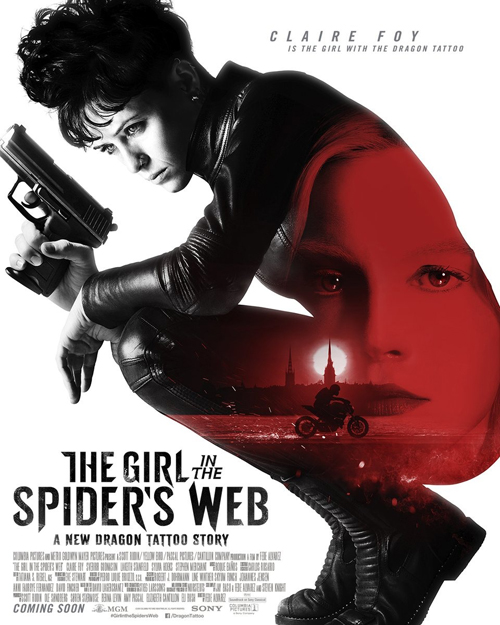 (SPOILERS) Choosing to make The Girl in the Spider’s Web following the failure of the David Fincher film – well, not a failure per se, but like Blade Runner 2049, it simply cost far too much to justify its inevitably limited returns – was a very bizarre decision on MGM’s part. A decision to reboot, with a different cast, having no frame of reference for the rest of the trilogy unless you checked out the Swedish movies (or read the books, but who does that?); someone actually thought this would possibly do well? Evidently the same execs churning out desperately flailing remakes based on their back catalogue of IPs (Ben-Hur, The Magnificent Seven, Death Wish, Tomb Raider); occasionally there’s creative flair amid the dross (Creed, A Star is Born), but otherwise, it’s the most transparently creatively bankrupt studio there is.

Which makes it a minor miracle that Spider’s Web is an at least serviceable thriller. Despite being based on a post-Steig Larson cash-in-for-the-estate novel (I still haven’t checked out the sixth Hitch-Hiker’s Guide to the Galaxy for similar reasons), and despite inevitably making it all about the past of the Lisbeth Salander again via an elaborate re-envisioning of her sister (or is it? Who knows what Larson’s intentions were) that only serves to diminish the otherwise agreeably preposterous plot.

My knee-jerk reaction to the news that Doug Liman was consulting Fede Alvarez regarding the best way to salvage the (eventually) forthcoming Chaos Walking via some extensive reshoots was “Why would you want to go to him?” He isn’t, after all, the most salubrious of filmmakers (to the extent that I have no wish to see his Evil Dead remake, while Don’t Breathe stands as a slick but distasteful exploitation flick). There’s plenty of implicit nastiness in this movie, the most obviously Alvarez-like – based on past form – being a noseless victim of the major henchman. The rubber vacuum device was also an addition (Alavarez has a screenplay credit, as does Steven Knight), so make of that what you will. He does, though, undeniably, know his way around a suspense sequence,

Alvarez is probably, well not wasting his time on horror since they make a lot of dough, but certainly not making the most of his talents. On this evidence, he’s an obviously talented action director, able to handle scale and spectacle outside of more intimate chills. There are several sterling chase sequences, and if you, like me, spent most of the movie wondering why LaKeith Stanfield wanted his part, wait until you get to the finale where he takes down most of the bad guys with a sniper’s rifle that fires through walls (it’s a great sequence, executed by Alvarez with tremendous flair).

On the other hand, there’s a very silly airport episode that suggests most of Salander’s tech skills are the equivalent of a magic wand (or sonic screwdriver). More damagingly, everything involving her crimson-clad sister (Sylvia Hoeks, of the aforementioned Blade Runner 2049) is a bust. Aside from a prologue in which Lisbeth leaves her to her predatory father (“Why did you help everyone but me?” asks Camilla, and the answer is “Because your formative experiences were retconned for this sequel, of course”), she has no function other than to be a big bad reveal (not so much, as her spectre is signposted with clumsy ruthlessness throughout) incorporating the all-important origins component that is sadly essential to modern fiction’s conceptual universes.

Elsewhere in the mix, there’s a genius kid (Christopher Convery) who never really takes on much importance, since he’s as much of a MacGuffin as the actual MacGuffin, and his dad, played by Stephen Merchant, a better actor than Ricky Gervais, but that isn’t really an endorsement. Oh, and Vicky Krieps, so great in Phantom Thread, has been seriously short changed as Blmokvist’s publisher. He (Sverir Gudnason) is at least in a more fittingly subordinate role compared to the Daniel Craig incarnation. As for Claire Foy, I come from a place of being mildly irritated that Rooney Mara didn’t get another shot, but Foy’s pretty good, and either she or (probably not) Alvarez ensures the voyeuristic sensibilities of the Fincher version are largely absent.

So yeah, The Girl in the Spider’s Web is actually surprisingly okay. It drops out of gear, ironically, as soon as Camilla is properly introduced, but then stages a decent recovery. It has no business being even okay, though, as it’s very existence is the kind of Hollywood franchise botch that should have been foreseen way before $40m was sunk into it.

I can only presume there’s a never-ending pile of Young Adult fiction poised for big screen failure, all of it comprising multi-novel storylines just begging for a moment in the Sun. Every time an adaptation crashes and burns (and the odds are that they will) another one rises, hydra-like, hoping…
2 comments
Read more