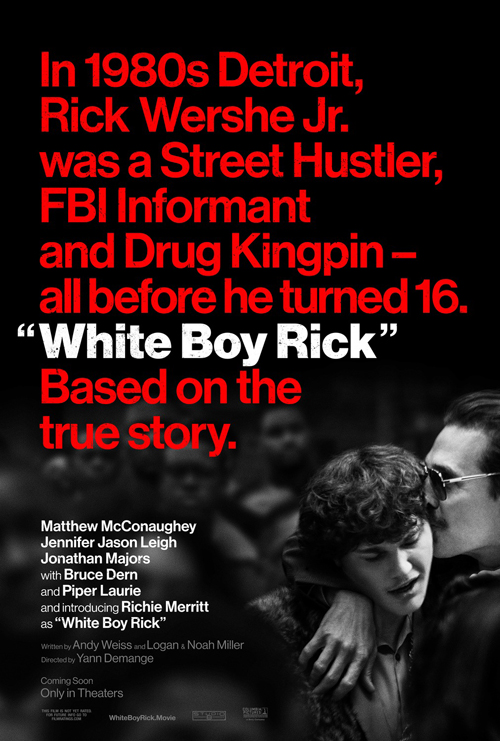 (SPOILERS) '71, Yann Demange’s edge-of-the-seat feature debut, had me eager to see whatever he did next (one of those things turned outnotto be the next Bond movie, for which he was cited as shortlisted; probably for the best to avoid having his career derailed quite so soon). Unfortunately, while this account of the FBI’s youngest informant boasts excellent performances (not least Richie Merritt, debuting in the title role) and an unsurprisingly authentic milieu – Detroit looks an even less savoury place to live than it did in Robocop – Demange somehow allows attachment to the fate of Rick Wershe Jr to escape him.

Part of that might be the episodic nature of the tale, which never sufficiently coalesces so as to offer a sense of direction or purpose. Rick’s dealing operation translates as almost incidental in scope and activity; when he (the actual Rick) observes “I became addicted to the money. I became addicted to the women. I became addicted to the life” that may be aggrandisement to some degree, but such an attitude is wholly absent from the movie, where he drifts diffidently from one party or gang meeting to the next. There’s an appealing unflappability to Merritt’s performance, but the counter is that there’s little sense of what he wants or what he’s trying to achieve (other than leave Detroit; a scene in which he persuades dad that dealing will solve their money problems has been denied by his sister, but is ironically one of the movie’s few galvanising moments). That maybe an accurate reflection, but it doesn’t provide for an engaging narrative.

Still, Matthew McConaughey is in top form as Rick’s dad Richard Wershe Sr, a self-confessed small-time hustler and gun dealer, and an informant himself. He’s a hopeless dad, but one with a Del Boy Trotter belief in impossible dreams (and a video store); when he’s on screen, the actor supplies a sense of trajectory the movie otherwise lacks. Bel Powley (The Diary of a Teenage Girl) makes an impression too, as Rick’s junkie sister. There are also small memorable roles for Bruce Dern and Piper Laurie as his grandparents. Less effective are Rick’s FBI/police handlers (Jennifer Jason Leigh, Brian Tyree Henry, Rory Cochrane), mostly because there’s no room for them to be anything other than one-note manipulators of their young snare. As for Eddie Marsan, one has to assume the majority of him ended up on the cutting room floor.

It may well have done, as reshoots were involved; maybe that’s when the picture got away from Demange, as you can see he has all the necessary ingredients, with no shortage of ready acumen to apply. There’s also no shortage of material that didn’t make it to the screen (the police detective who allegedly had a hit put out on Rick being the same one who played Eddie Murphy’s boss in Beverly Hills Cop). Even Rick’s sentencing (life, eventually paroled in 2017 after thirty years incarcerated, albeit he’s still in prison for another offence) fails to provoke a strong response, because the director and actor haven’t found an empathic connection to the character. On the plus side, I’m doubtful Demange could make an entirely unrewarding film, and the making of it does at least seem to have influenced Wershe Jr’s parole hearing.