You have a white voice in there. You can use it. 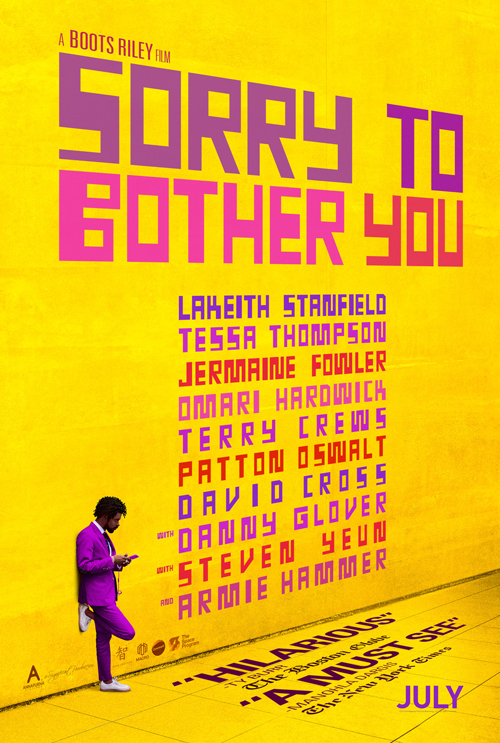 (SPOILERS) There’s a cumulative fatigue accompanying Sorry to Bother You, akin to readily agreeing to sign a petition only to be immediately subjected to a ten-minute tirade detailing all the reasons you should sign said petition. Boots Riley’s film can boast several great performances (in particular, Lakeith Stanfield, marvellously deadpan in the lead role), is intermittently very funny, has an appealing visual flair and a deftly complementary soundtrack (courtesy of Tune-Yards and Riley’s The Coup), but by the time it’s done, you’ve more than had enough. And that’s without including the horse-men.

The setup is confident and energised, as Stanfield’s Cash, living in uncle Terry Crews’ garage, gets himself a job in the most soul-sucking industry there is, telemarketing, and proceeds to rise swiftly through the ranks owing to his precise appropriation of a too-perfect white salesman voice (advice on this comes courtesy of Danny Glover, the voice courtesy of David Cross). You can see hints of other corporate satires in here, ranging from Office Space to How to Succeed at Business Without Really Trying, but there are also other warning signs that the whole may be less sharp than the upward path of its central player. Riley encumbers Cash with an artist girlfriend (the ubiquitous Tessa Thompson, who is reaching the point where the pick of the roles have exceeded her range) who ticks all the obvious boxes of satires of modern art – complete with an admittedly amusingly confrontational performance art show – and the attentions of a union activist (Steven Yeun) striving for telemarketers’ rights. If the same wit was on display in these subplots, all would be well, but Riley, hailing from activist roots, tends to play these elements either straight or with sledgehammer subtlety.

Nevertheless, there’s much to chuckle at in the adulation Cash receives from his bosses for his star sales turns, and he’s quickly sent upstairs via a lift with an impossible to remember pass key to become a “power caller”. Here he discovers he’s engaging in out-and-out corporate slavery, enlisting those working (having signed away their lives for a roof over their heads) for CEO Armie Hammer’s Worry Free to various other corporations, and you realise Riley has backed himself into a cul-de-sac of soapboxing. Rather than an open-ended satire like Brazil, this is closer to the blunt tool of Robocop 2. Everything is surface level, right down to the equine sapiens providing a boost to the labour requirements of client firms (but still, they have horse dicks). Indeed, their inclusion is the least interesting development Riley could have introduced, as if he scheduled a last-minute script conference with Seth Rogen for the political acumen the boorish oaf could bring to the table.

Riley’s visual sense ensures the picture always looks interesting – when he calls them, up, Cash crashes into the living space of his potential clients – and takes on an appropriately nightmarish hue as Cash’s path proceeds inevitably hell-wards, but there’s an increasingly obvious picking of targets (the racial stereotyping Cash is subjected to when asked to rap for his mostly white co-party guests, and their blithe shouting along with him; the TV show I Just Got the Shit Kicked Out of Me, in which contestants are beaten up then dipped in shit) even as you chuckle along. I think perhaps I ended up feeling disappointed because Sorry to Bother You begins with so much potential, like an Alex Cox picture circa Repo Man, but somehow ends up closer to a Michel Gondry film not written by Charlie Kaufman.

Riley seems to be suggesting that, however broad Sorry to Bother You’s satire goes, it still won’t be able to compete with actual events (when Cash blows the whistle on the horse men, Hammer’s CEO is hailed as a visionary; there’d probably be a few more layers to that in reality, such as a merger/change of branding, public outrage turning to indifference turning to acceptance, and the CEO returning to the fore having done nominal penance), but the coda, whereby Cash only forsakes a return to the relative comfort of his old life because he’s turning into a horse, might have been a little sharper if the metaphor wasn’t the bluntest since Alexander Payne’s Downsizing.

I can only presume there’s a never-ending pile of Young Adult fiction poised for big screen failure, all of it comprising multi-novel storylines just begging for a moment in the Sun. Every time an adaptation crashes and burns (and the odds are that they will) another one rises, hydra-like, hoping…
2 comments
Read more