Have you always lived here, Mother? 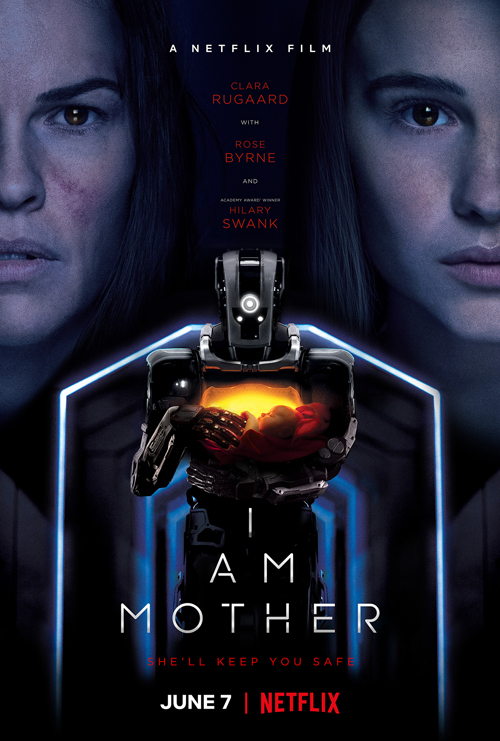 (SPOILERS) This Netflix science-fiction offering arrived with very solid reviews, always a surprise for a Netflix movie, even one they picked up at Sundance. For about two-thirds of the running time, I Am Mother seems to justify the (modest) raves. It boasts assured direction from Grant Sputore (making his feature debut), polished production values and strong performances from a very small cast (basically Hilary Swank and Clare Rugaard, with Luke Hawker in a Weta robot body suit and Rose Byrne providing the voice). It operates intriguing turns of plot and switches in sympathies. Ultimately, however, I Am Mother heads towards a faintly underwhelming and unremarkable, standard-issue conclusion.

We’re essentially informed there’s something suspect about the assumed scenario during the prologue, in which, following an extinction event, droid Mother is observed overseeing an underground facility housing 63,000 embryos. “She” brings a child into the world, and an onscreen title soon informs us that 13,867 days have passed since the event… which would make the teenager we see thirty-seven years old. More the kind of age range Hilary Swank’s later interloper is, in fact (I was expecting this to be a reveal, that she was a reject or had escaped, but it appears she actually is a survivor from the outside, albeit one surviving at Mother’s permission).

There’s much potential in the hermetic universe suggested by Michael Lloyd Green’s Black List screenplay (from a story he hashed out with Sputore), but much of it is squandered in standard tropes. The “Who’s lying to whom?” of Swank and Mother vying for the allegiance of Rugaard’s Daughter is engaging to a degree (in as much as we don’t have the fine details), but lands somewhere all too familiar to any with but a brief sampling of evil AI plots (the AI/ Mother initiated the extinction even in order to fashion a better humanity, terminating any offspring who failed to meet her exacting ethical standards… until now).

Much is made of utilitarian decision making in the first instance – it’s key to Daughter’s exams – but the screenplay does little fresh or notable with this. Worse, it entirely fails to make Daughter a character who (a) imbues anything discernible to evidence why Mother thinks she stands out and (b) behaves in the manner of one who has been raised devoid of contact with other humans; when Swank arrives it’s “on with the show”. Likewise, when Daughter’s released into the exterior, there’s little impact from her perspective (although Steven Annis’ cinematography is impressive). That’s not to put down Rugaard’s performance; she’s very impressive, but she doesn’t have the material (or direction) to work with.

Indeed, even the intrigue of working out the truth from the various tales told was done much more effectively in the fairly recent, also claustrophobic 10 Cloverfield Road. We expect an AI to turn evil, and have expected robots to go/be rogue for decades now (Saturn 3, Demon Seed, Alien etc). That Mother has a deluded moral code (“I had to intervene, to elevate my creators”), based on her interpretation of the greater need, isn’t really a vital enough spark to make this stand out from the crowd. I Am Mother is, nevertheless, an effective calling card production-wise, and Sputore’s sure to be in great future demand (as is Rugaard). I hope, however, that if this is any indication, studios don’t give him free rein to develop his own undercooked ideas (see previously Weta-kind Neill Blomkamp).