I despise that chicken. 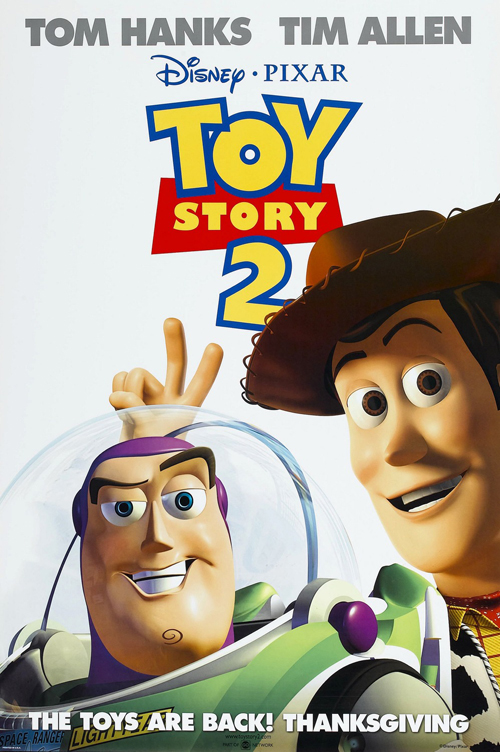 (SPOILERS) Acclaimed as the Pixar high-water mark by many (a high accolade indeed) and one of the best sequels ever made, I’m afraid my response is more along the lines of “Well, yes, it is good, but…” Rotten Tomatoes can’t be wrong, though, with 100% fresh and an average rating of 8.67 out of 10. There’s not much nuance to a straight positive, however, and Toy Story 2, while raved over for its thematic depth and nuance, is basically more of the same, just more polished.

Of course, more of the same is nothing to be sneezed at. In the sequel world, it’s practically de rigueur, with just enough that’s fresh to content audiences seeking the recognisable and familiar. And Toy Story 2 is arguably – since we’re talking toys, commercially available items eliciting child covetousness and selfishness – a superior product to the first one, both technically and in terms of storytelling (if a little less sleek in the latter respect; this is the point where even animations begin getting longer and longer).

Perhaps part of the reason I’m resistant to these movies to a degree is the character of Woody, an essentially sentimental, nostalgic creation, and an unlikely one at that; the idea that a kid should be attached to a crappy old toy from the ‘50s/60s is very much an adult one, making that adult a formerly rare child, possibly the kind who grows up to become an animator and is shamed for acting creepily towards his female co-workers. Even the pictures’ recognition of the need to face up to passing time and built-in-obsolescence is basically mawkish (yet, antithetically, eventually everything turns out fine for Woody, when he’d obviously have been thrown out or abandoned long ago for a much cooler toy).

This was, famously, originally going to be direct-to-video affair (Disney exerting a sequel right they had in the original deal) and one not involving Pixar’s main team, who were busy with A Bug’s Life; Lasseter wasn’t happy with the results and committed to a retooled movie, embarking on an accelerated production schedule to meet the release date (Disney had already decided on a theatrical run by that point).

Which may explain – although perhaps not, since Toy Story 3 does almost the same thing – why the plot is pretty much the first one reduxed, but instead of Buzz ending up in the clutches of an evil child, Woody is purloined by Wayne Knight’s Al McWhiggin, of Al’s Toy Barn, intent on adding him to his valuable Woody’s Roundup Collection and shipping him off to Japan to be put in a toy museum. Cue much, slightly rancid, discussion of a toy’s ideal lot (to be played with, rather than left on the shelf, possibly a metaphor for leading an ephemerally productive, purposeful life as a good hardworking citizen who knows their place; notably, Stinky Pete’s vision of decadently living for ever – the toy equivalent of the elite? – is to be ultimately spurned).

Certainly, this plotline is both the emotional core of Toy Story 2 and very slightly a chore. Cowgirl Jessie (Joan Cusack) is introduced – at the behest of Mrs Lasseter, telling John he needed a strong female character – and is unfortunately on the annoying side (which might be the first time I’ve found Cusack annoying in anything), and the picture stops dead in its tracks for the latest Randy Newman composition (poor Jessie was given away by her former owner).

On the other hand, almost everything involving Buzz and the gang tracking down Woody is gleefully inventive, inspiring an avalanche of gags, from Buzz encountering his oblivious-to-his-artifice double (with added utility belt) to his (their) pursuit by Emperor Zurg. Hamm (“Boy, I seriously doubt he’s getting this kind of mileage” he comments of an appropriated automobile) and Rex are the highlight supporting toys again, while Estelle Harris (like Knight, then appearing in Seinfeld) is a welcome and distinctive vocal presence as Mrs Potato Head.

And the grand climax is undeniably superb, Buzz and co first attempting to locate Woody’s suitcase in a maze of airport conveyor belts and followed by the freed Woody executing a daring rescue of Jessie on a plane barrelling towards take-off. Toy Story 2 is superior to Toy Story, then, but it’s also very much a variation on the same. Indeed, I know I’m not their principle audience, but the trilogy rather blended into one before this revisit, which is surely a sign that they’re doing something not quite right somewhere.