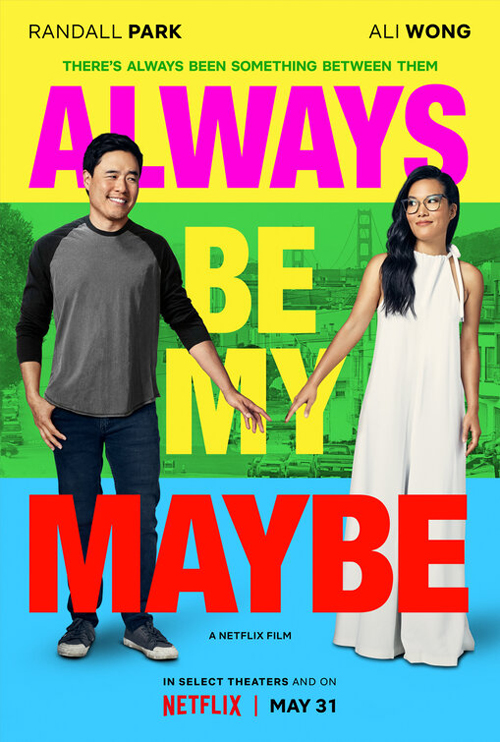 (SPOILERS) The pun-tastic title of this Netflix romcom is a fair indication of its affably undemanding attributes. An unapologetic riff on When Harry Met Sally, wherein childhood friends rather than college attendees finally agree the best thing to be is together, it’s resolutely determined to cover no new ground, all the way through to its positive compromise finale. That’s never a barrier to a good romcom, though – at their best, their charm is down to ploughing familiar furrows. Always Be My Maybe’s problem is that, decent comedy performers though the two leads may be – and co-writers with Michael Golamco – you don’t really care whether they get together or not. Which isn’t like When Harry Met Sally at all.

Ali Wong (Sasha) and Randall Park (Marcus) are inseparable as kids, then as teenagers, until things go awry upon consummating their relationship and they lose contact. She becomes a celebrity chef and Daniel Day Kim her fiancé, he underachieves, working with his dad as a handyman and rapping in a strictly low-rent band; inevitably, when circumstances lead to their reacquaintance and renewed romance, the clash of perspectives soon gets in the way.

Wong is fine, in the hardboiled Jeanne Garofalo mode (not sure why all her expensive dresses resemble tied together bedsheets, though), but Park is singularly ill-suited to romantic lead duties, attempting to approximate Jerry Seinfeld but coming across as a whiny grump rather than witty and deadpan. And while there’s an abundance of good lines here (“Have you seen yourself in those overalls? You look like a homeless astronaut”), they’re often ill-at-ease in the narrative, too obviously over-scripted and unnaturalistic (“You look like 1980s Ellen when she did stand-up” – yes, many are couture related); it’s very much a “learned” romcom, sticking rigidly to formula and yet perversely lacking an effortless flow. But you forgive a lot if the leads have chemistry, and here it’s in short supply. Michelle Buteau fares much better delivery-wise as Sasha’s best friend (“So, instead of getting married, he’s just going to Eat Pray Love” she quips after Kim persuades Sasha to postpone the wedding and embrace seeeing other people while going off to India).

Perversely, it’s when the movie goes mostoff-track that it’s at its best, during an extended cameo from Keanu Reeves (as himself) as Sasha’s dinner date (with Marcus also attending with girlfriend Jenny, played by Vivian Bang). Revelling in this surreal turn, the writing is at its most inspired, with a hyperbolically self-involved, pretentious (and pugilistic) version of Keanu at a restaurant serving the most absurd menu choices. Presumably chaffing that he never got the call from Ricky Gervais to be in Extras – a lucky escape – Keanu is, in honesty, the main reason I checked Always Be My Maybe out, and he can add it to the list that constitutes his Reevesurgance over the last few years.

Keanu: May I ask, do you have any dishes that play with time? The concept of time?
Waiter: Ah yes. We have a meat course of Venison Sous Vide. It comes with headphones so you can hear the sound of the exact animal you are about to consume, illustrating nature’s life-to-death cycle.

Given to statements such as “The only stars that matter are the ones you look at when you dream” and a desire for a meal that plays with the concept of time, Keanu quickly reveals himself, as Marcus puts it, as “a douche” (Marcus doesn’t fare well with the meal; told everything on the table is edible, he has to be instructed “No, not the napkin, sir”). Particularly when Reeves reveals he paid the hefty bill with Speed residuals while simultaneously belittling his belle’s ex, and later, that, at his pad for a nightcap and a game of Icebreaker, he’d kill Marcus if he had to kill anyone present (another question, “Who is the most disturbing person you’ve ever masturbated to?”, elicits responses ranging from Gene Wilder to Mao Tze Sun; this is the movie’s slightly more insane version of When Harry Met Sally’s “Baby fish mouth” Pictionary game).

Partly, I think that sequence works so well because it isn’t about Marcus and Sasha interrelating so much as reacting to the crazy world of Keanu. Sad to say, their bonding is all-too flat, and so the breakup is too, and thus the payoff of their finally getting to back together in turn lacks the necessary investment. It seems there’s been sequel talk, maybe with a baby (so the title can notbe a pun). Let’s hope their sprog has chemistry to burn.