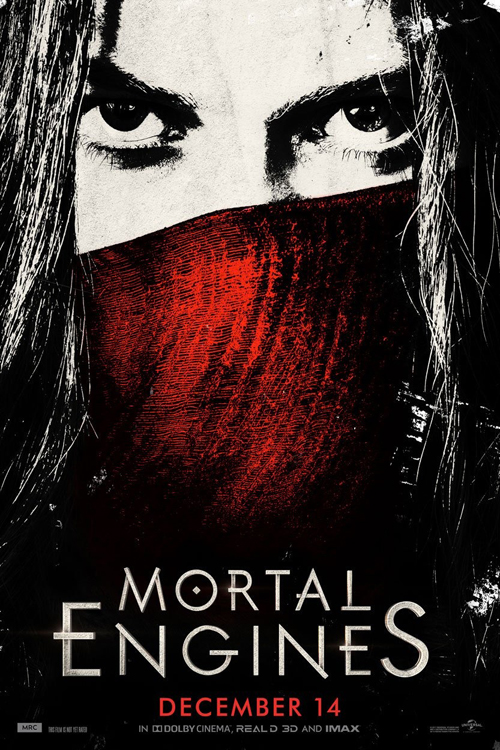 (SPOILERS) One of the all-time biggest flops, based on Deadline Hollywood’s estimates (the only competitors, in the upper range of price tags, are The Thirteen Warrior, John Carter, The Lone Ranger and Sinbad: Legend of the Seven Seas), yet no one much seems to care either way. There wasn’t any real crowing about what an unforgiveable misfire this was (see John Carter), and it didn’t send any studios into bankruptcy. It just sort of happened, everyone shrugged, and moved on. Which fairly accurately sums up Christian Rivers’ Mortal Engines.

Part of the picture’s problem is that the premise is fundamentally ridiculous, and one must assume Peter Jackson, shielded from the masses in his New Zealand ivory tower, has entirely lost his eye for hit franchise material. It’s notable – although you wouldn’t know it, given how very Young Adult the casting is – that Philip Reeves’ series of novels received literary awards in the 9-11-year-old bracket, which is just about what you’d expect for a series concerning post-apocalyptic cities haring around the countryside. Add Junkie XL on the soundtrack and you have imagery that skirts dangerously close to Mad Max parody. Indeed, I couldn’t but continually think of Terry Gilliam’s The Crimson Permanent Assurance. Such is the lack of verisimilitude, one has to conclude that, rather than a ludicrously excessive live-action budget, Mortal Engines might have been better suited to the stop-motion world of Laika.

The plot, such as it is, concerns Hugo Weaving’s crazed Thaddeus Valentine and his attempts to gain dominion over rival cities on wheels through wielding the same deadly power source (MEDUSA, a quantum energy weapon) that did for civilisation in the distant past. Hester Shaw (Hera Hilmar) is out for revenge on Thaddeus for what he done to her mom, while Thaddeus’ daughter (Leila George) is blissfully unaware of daddy’s essential dodginess. Robert Sheehan is a hapless historian thrown in with fugitive Hester through the vagaries of circumstance, and together they try to stop the villain’s plans with the aid of sky pilot (not Cardinal) Fang (Jihae Kim). Yeah, it’s kind of “whatever”, isn’t it?

Performance-wise, there’s nothing to complain about. It’s patently obvious, however, that having everyone note how repulsive her facial scar is doesn’t make Hester remotely unattractive. Hilmar’s very much the straight hero, with Sheehan more the bookish sidekick bumbler/ love interest; you could quite imagine him being cast as Doctor Who in a few years’ time, in the more photogenic Tennant mould. Weaving chews scenery in the manner we’ve been used to for several decades now, and there’s a welcome showing from Patrick Malahide as his sometime boss.

Mortal Engines is exposition-heavy to begin with and intermittently throughout. It’s also weighed down by numerous set pieces clearly shot against blue screen. Rivers is definitely no effects supremo turned natural director in the manner of Neill Blomkamp (just don’t let the latter write his own scripts) as you’re constantly conscious of the artifice of the effects and that we’re on a sound stage.

The picture doesmanage a shift towards the genuinely engaging during the mid-section, however, with the introduction of cyborg Shrike (Stephen Lang), who raised Hester and is under the illusion she still wishes to become like him. As is often the case with the genre, what genuine pathos the picture has derives from a non-human character, and the proceedings promptly revert to type once he exits.

Indeed, the grand climax is a grand slog, as Thaddeus attacks the Shield Wall, a barrier to the City of London spreading its net amongst the Anti-Traction League (static settlements in Asia enjoying freedom). Lots of sound and fury signifying not a lot. There’s a showdown with Thaddeus, in which a Luke-Vader twist is revealed, but it has negligible impact; unlike Lucas’ original trilogy, Jackson’s production has entirely failed to capture the imagination with its characters and world, so it’s much too late to start at this late stage. Instead, the biggest takeaway is the desperation of non-Disney studios for franchise starters, so great that they’ll throw money at Jackson based on the success of one series and with a novice director attached. Mortal Engines is far from a disaster – except financially, obviously – but it never once gives you the impression that it had any potential as blockbuster series.