We’re behind all the best windows. 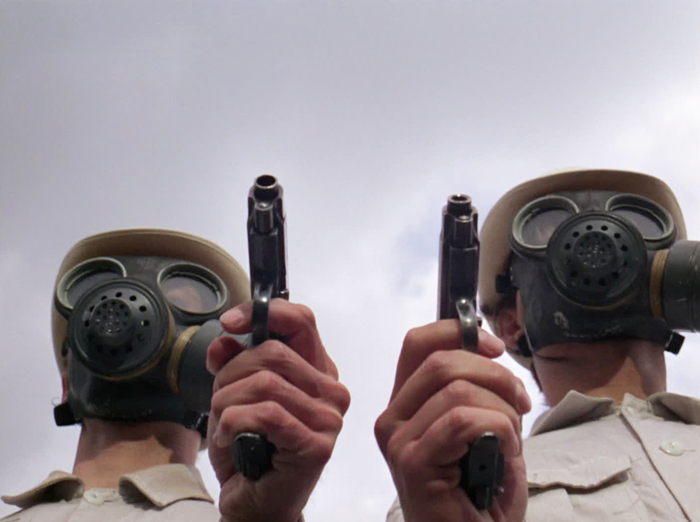 More idyllic location filming in this one, most notably in the form of Mother’s temporary base in a field, as second-unit man John Hough graduates to main man and provides a wealth of striking visuals. Not enough, unfortunately, to make a silk purse from Tony Williamson’s rather uninspired teleplay (Williamson’s prior contributions to the show included the high of 4.6: Too Many Christmas Trees and the low of 5.23: The Positive-Negative Man). 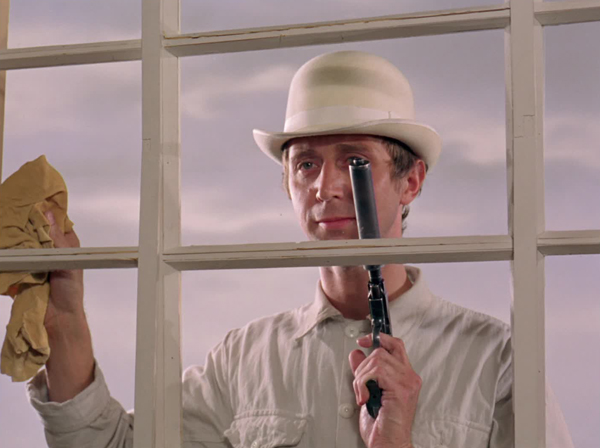 Hough would go on to direct three more episodes (and a New Avengers) as well as having an interesting big-screen career (such pictures as Twins of Evil, The Legend of Hell House, Dirty Mary Crazy Larry, and providing darker Disney thrills in the form of Escape to Witch Mountain and The Watcher in the Woods… Also, erm, Biggles). There’s a decent teaser with an old lady on a bike revealed as a male spy trying (and failing) to catch a helicopter. Included upon his person are top secret codes, “only available at Cypher HQ”. 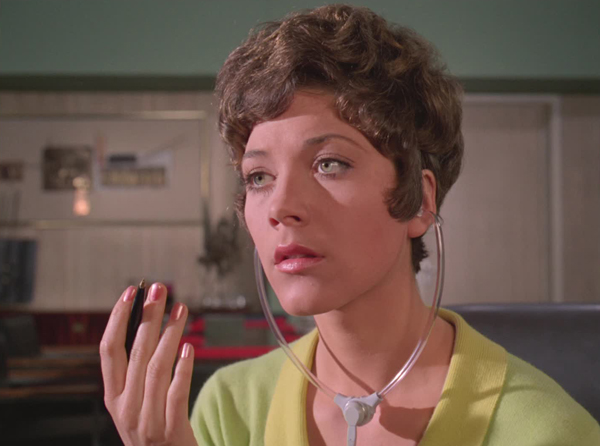 Steed: It’s not every assassin who has the foresight to carry his own ladder.

Said codes are being extracted by operatives of Classy Glass Cleaning with the aid of a hypnotic gas; they arrive daily to immobilise the staff (literally) and copy the codes they need, leaving instructions regarding the time the employees have missed (“It’s been a perfectly normal day”), albeit not fool-proof ones (being told it has rained when there’s no sign of this). 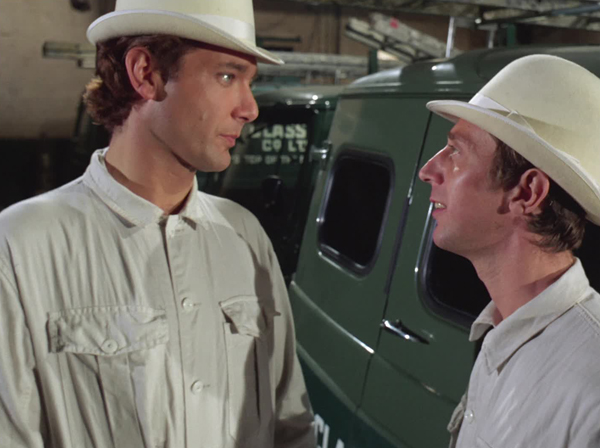 Lather: At Classy Glass, the world is our window.

Initially, it appears that the head of Classy Glass, Lather (Nicholas Smith, 5.2: Escape in Time) may be that old standard, the dupe, used while his underlings get up to no good (“There are no short cuts to the top of the ladder. Here, we really care about our windows”), but he actually is the chief villain, his underling Maskin (Simon Oates, 5.21: You Have Just Been Murdered) leading operations, accompanied by Vickers (Donald Gee, The Space Pirates, The Monster of Peladon) and a troop of heavies in white overalls and bowler hats; Hough excels in his compositions, from gas mask and pistol combos to classy ladder set ups, while the stylised use of bowler hats adds a certain pre-Clockwork Orange frisson. 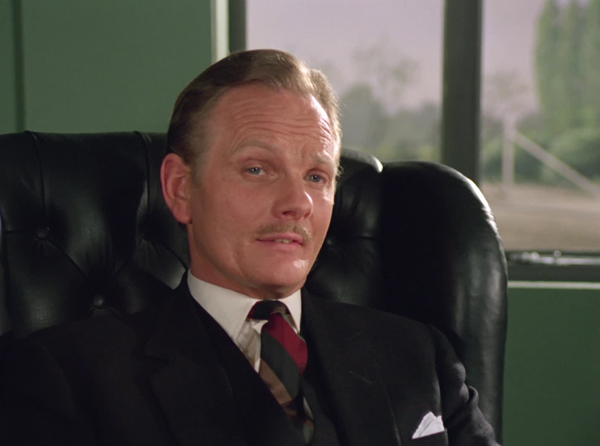 Steed and Tara aren’t initially on the case, as MI-12 have sent in their man Jarret (Clifford Earl, also Escape in Time); when he goes missing, it’s time for Steed and Tara (“MI-12 losing one of their men. Having the audacity to ask us to find him”) to sort things out, the latter going undercover as a secretary. At first glance, Cypher HQ Director Webster (Allan Cuthbertson, 1.24: The Deadly Air, 4.5: Death at Bargain Prices, 5.17: Death’s Door) looks a bit suspect, given how he fails to react to the death of Jarret, but that turns out to be a misdirection of the gas at work. 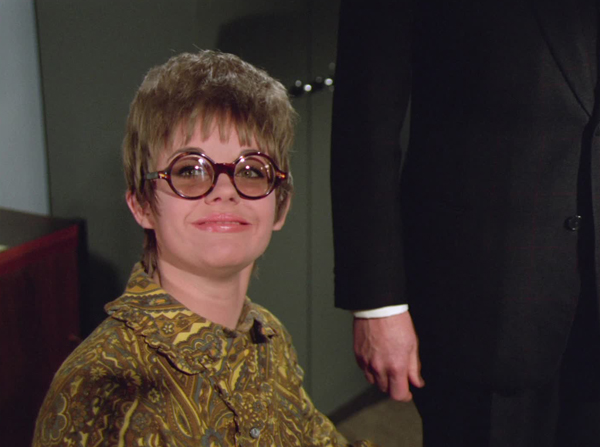 Notable among the supporting cast are Myra (Angela Scoular, with her dippy spectacles, always my favourite of Blofeld’s “harem” in On Her Majesty’s Secret Service, latterly of several Adventures of a… sex “comedies”), there for Steed to flirt with, and MI-12 investigator Ferret (Ivor Dean, 2.9: The Removal Men, 5.19: Dead Man’s Treasure). 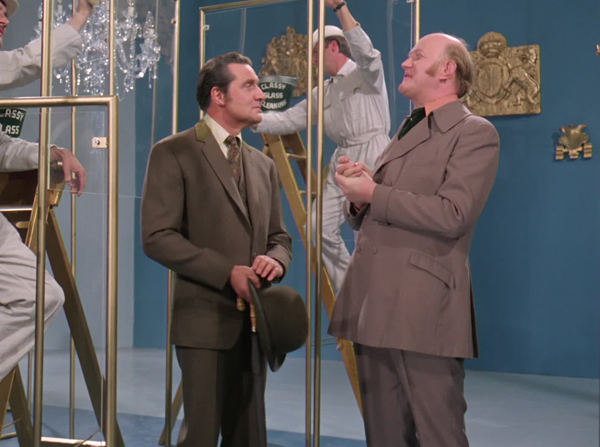 Steed’s visit to Classy Glass is most amusing, asking for the full deluxe treatment for a single window; the rest are boarded up (“Men have cracked under less”). As is the escalation of affairs, as we finally see the full operation in action, accompanied by the marvellously soothing hypnotic instruction (“It is a perfectly ordinary day”) that sounds like something from The Ipcress File. All commendably achieved by Hough, who throws in a decent car chase with Steed too. Also some amusing incidentals among the villains (“Sandwich sir? Ham and chutney”: “Oh, no thanks”). 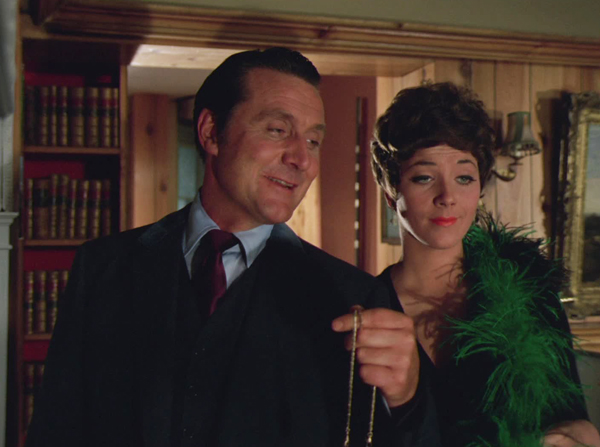 The coda is predictably hypnosis based, as Steed “sends himself to sleep” while trying to hypnotise Tara, who instructs him to take her to her favourite restaurant. An episode with a strong premise and memorable visuals from Hough – it probably sounds more essential than it is – but ultimately coming down on the routine side. 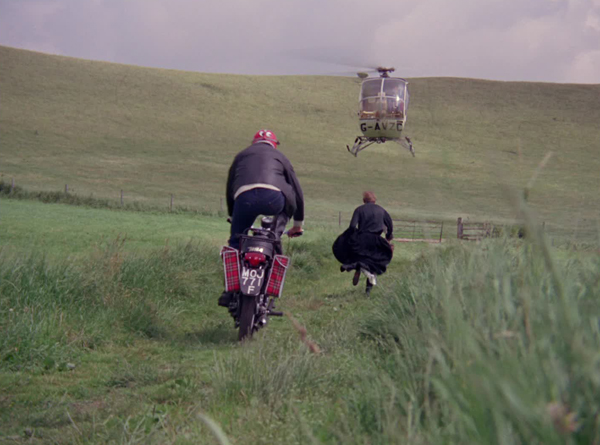 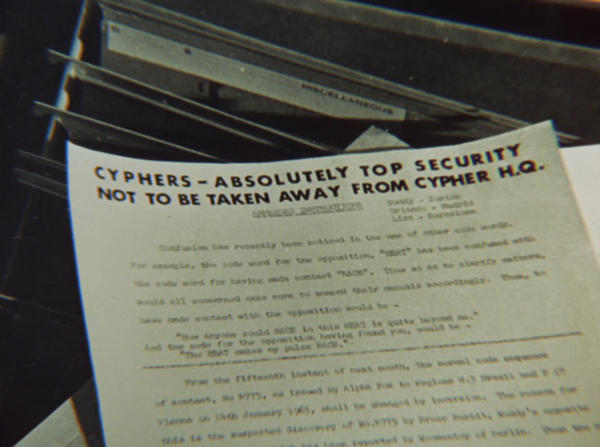 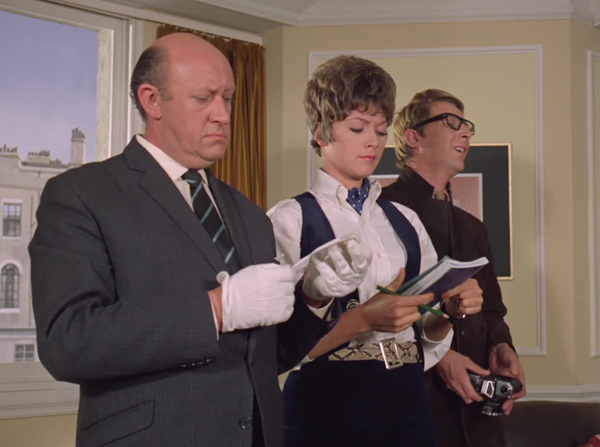 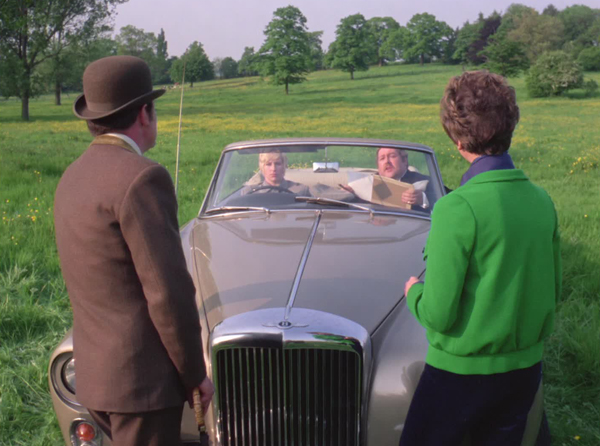 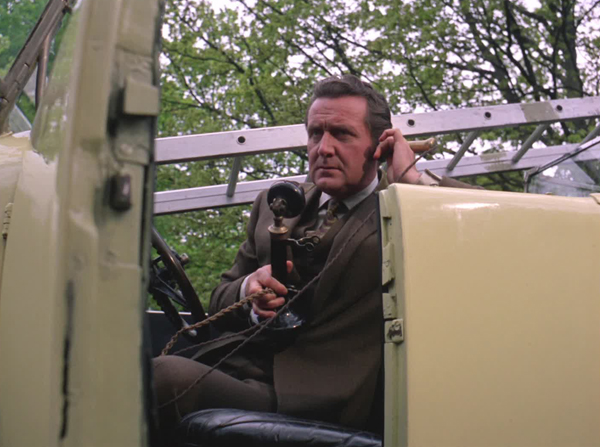 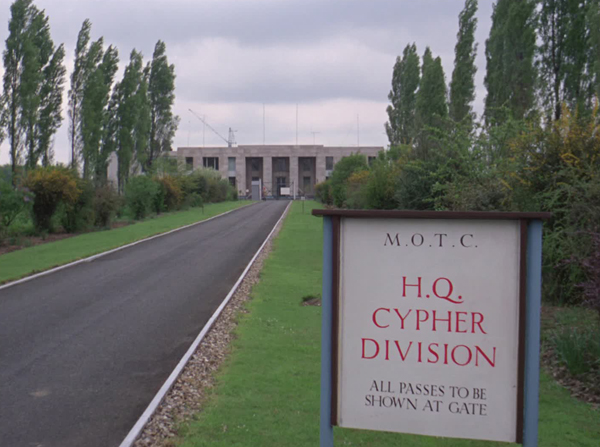 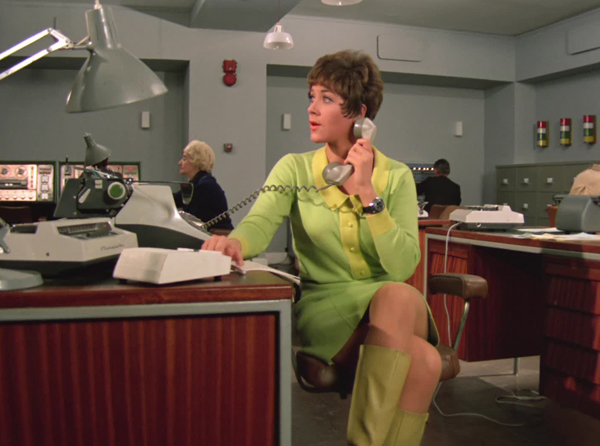 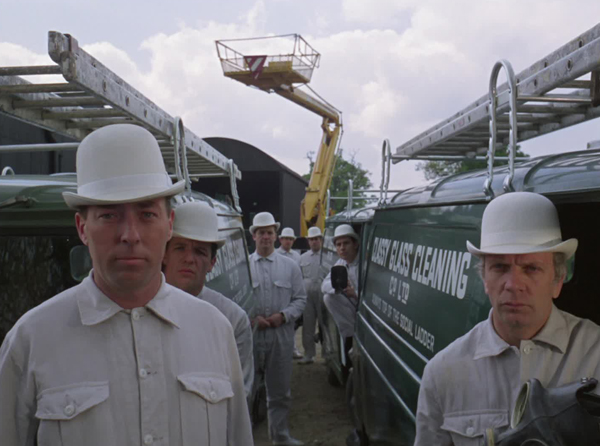 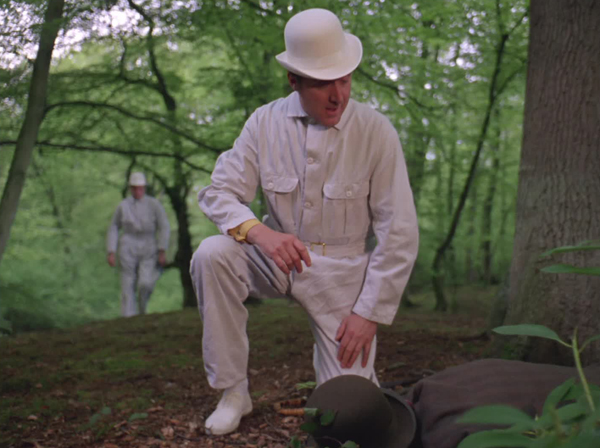 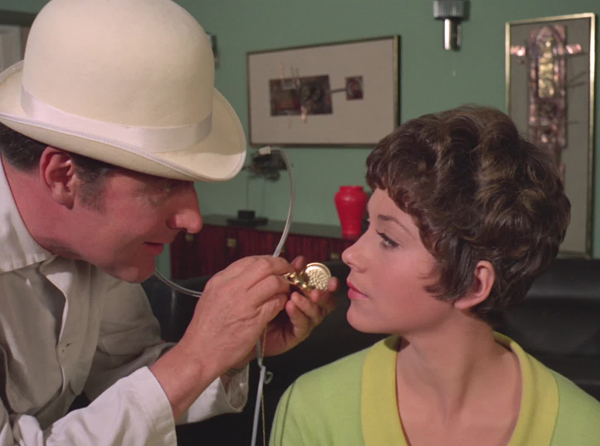 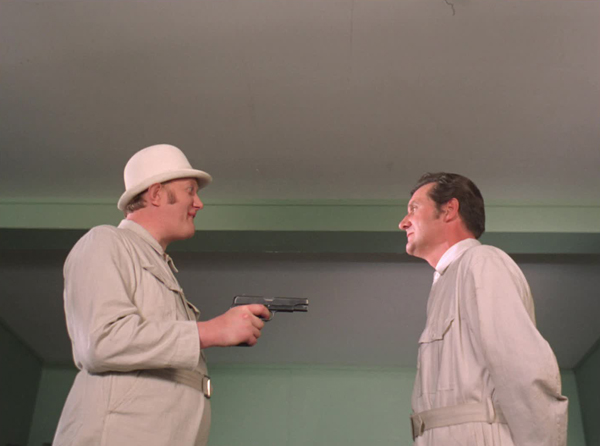 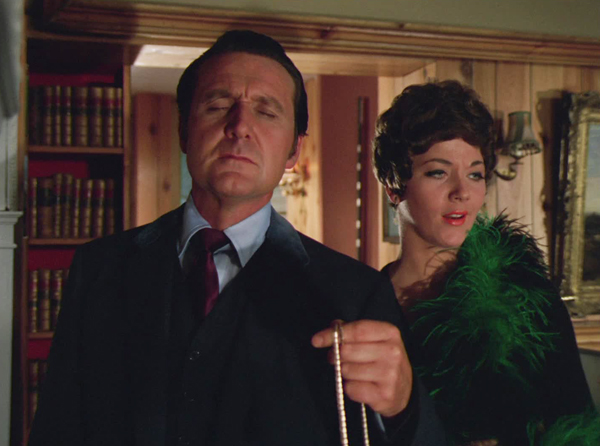