You have six minutes in which to win, or lose, our game of Super Secret Agent. 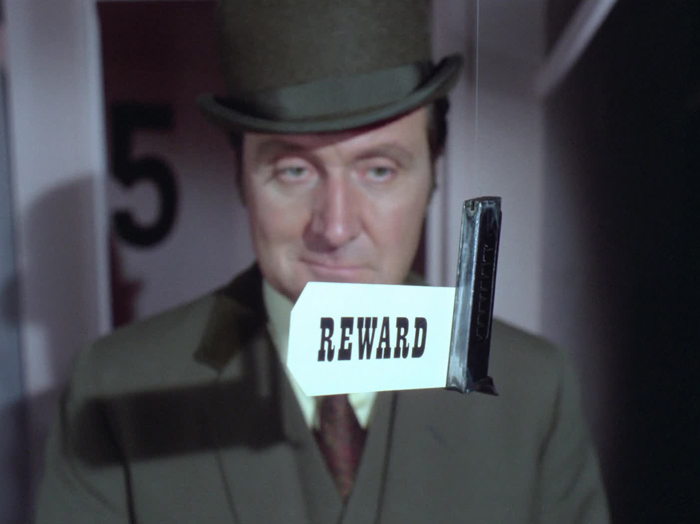 If you’re casting around for villain seeking revenge… look no further than Peter Jeffrey (4.9: Room without a View, 5.15: The Joker). In The Joker, he wanted payback against Mrs Peel, whereas this time, Steed’s on his list. Jeffrey’s a formidable presence even in a limited role, of course, and Game – a disappointingly spartan title – can at least boast variety of content, particularly during the finale. 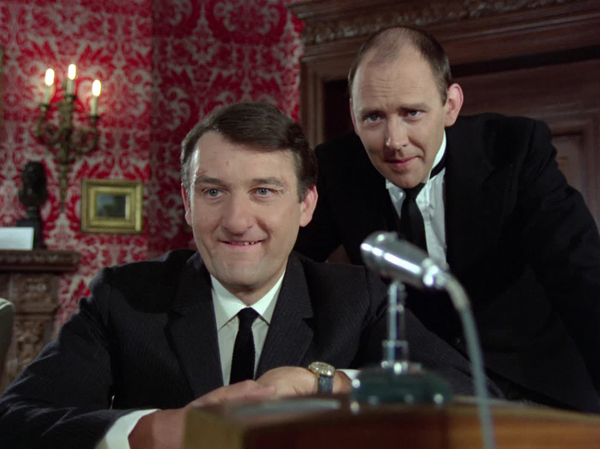 Steed: It’s odd, though. Who would send me a game of Snakes and Ladders?

Monte Bristow’s motivation is the court martial he received years before – in 1946, for black marketeering – from six jurors, and as a games manufacturer, he has conceived of very deadly versions of fun pastimes to achieve it. A bit like Saw, but less grisly. 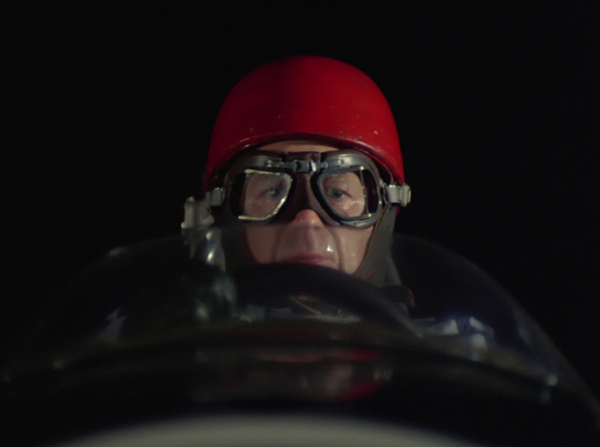 Racing driver Cooty Gibson (Brian Badcoe, Invasion of the Dinosaurs) is made to race a toy grand prix during which he is killed in a Lotus simulator (this being the teaser, his goggles are left full of jigsaw pieces). 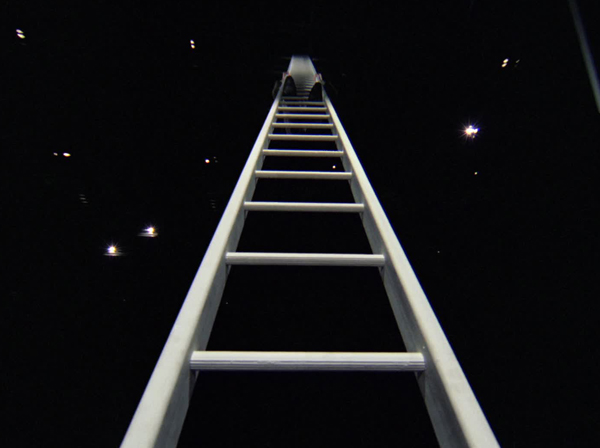 Dexter (Geoffrey Russell), a zoologist, is bitten by snake in a literal game Snakes and Ladders. 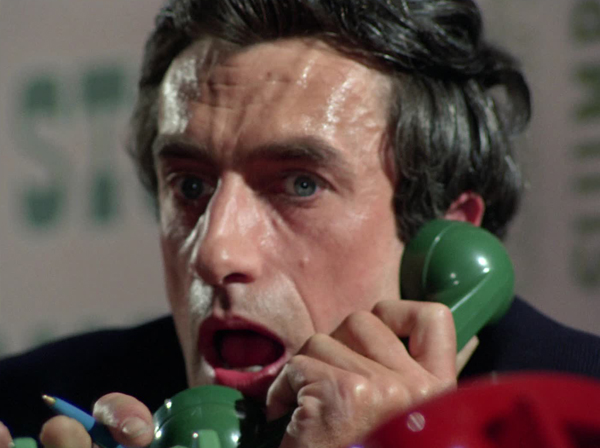 Financier Averman (Alex Scott, 1.3: Square Root of Evil, 4.6: Too Many Christmas Trees) is forced to play Stock Market, but succumbs to a heart attack when his stock collapses (“Oh dear. I’m afraid the strain was too much for him”). 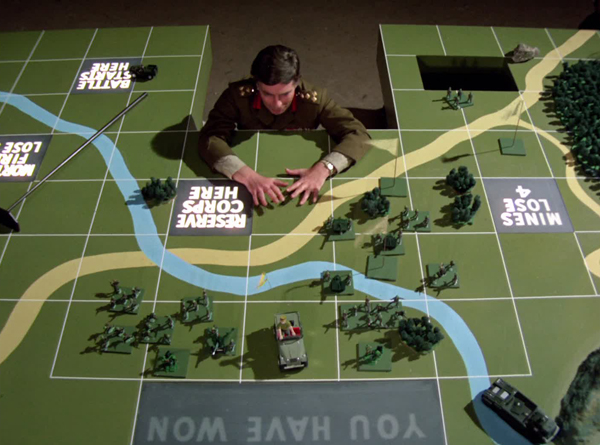 Brigadier Wishforth-Brown (Anthony Newlands, 4.4: Dial a Deadly Number) is given a minute to capture a hill in a game of toy soldiers (Bristow: Excellent. Excellent! He’s really entering into the spirit of things; Manservant: The best to date, sir) but succumbs to heavy fire from a toy cannon.

Bristow: Tell me, professor, do we shape our destiny, our does our destiny shape us?

English Professor Witney (Aubrey Richards, 4.8: The Gravediggers) is given seven letters to make a word of not less than six but is crushed by a descending roof before he can spell “EXPIRE”. 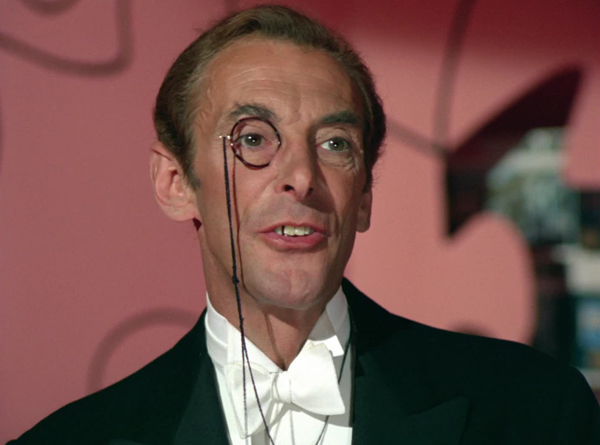 Manager: The centre of the jigsaw universe.
Tara: And you’re the manager?
Manager: The Master.

During all this, Steed and Tara are sent clues to bait them (dead Dexter on a swing in Merton Park playground, later Averman, both with jigsaw pieces in their hand). Tara is dispatched to speak to a jigsaw designer, naturally: Jig Creations manager, or master (Desmond Walter-Ellis), who comes armed with suitably oddball dialogue (Tara: Tell me, what do you do on long winter nights?; Manager: I ride a bicycle. What else?). Although, Tara also gets a number of offbeat lines, such as when she attempts to intercept Witney (Tara: Professor? Shall I wear my gym slip?: Steed: I would if I were you). 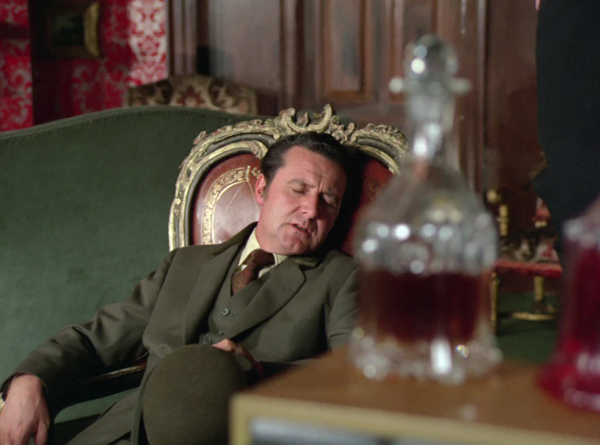 Bristow: You have six minutes in which to win, or lose, our game of Super Secret Agent.

Steed isn’t captured by Bristow until it’s his duly allotted time. As such, when he intercepts the abduction of Avebury, he’s twatted with an ashtray by Bristow’s exceedingly nasty manservant (Garfield Morgan, 5.1: The Fear Merchants) rather than being taken too. When he is led to Bristow’s house, he is drugged (better not to have taken a drink at all, but that’s Steed). 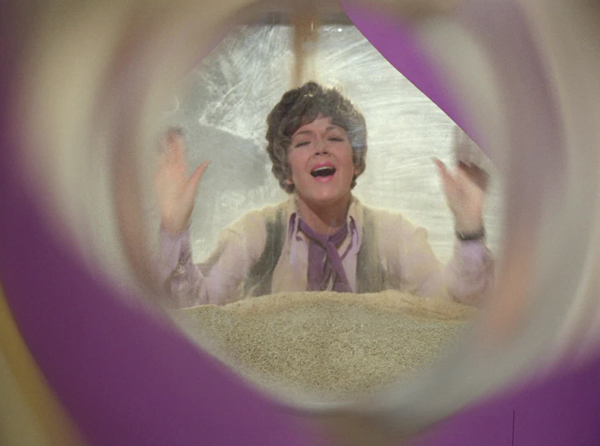 The finale is suitably extravagant, with the also-captive Tara imprisoned in a giant hourglass filling with sand; the director is Robert Fuest, latterly of The Abominable Dr Phibes, in his second of seven for the show (the first being My Wildest Dream). Steed has “six minutes before Miss King suffocates” and must face a “fiendish Japanese wrestler” (Romo Gorrara in not-quite yellow face), disconnect a time bomb, which he does, and for which he receives a gun as a prize (the manservant has to persuade Bristow: “The reward, sir. It is a rule of the game, sir”). 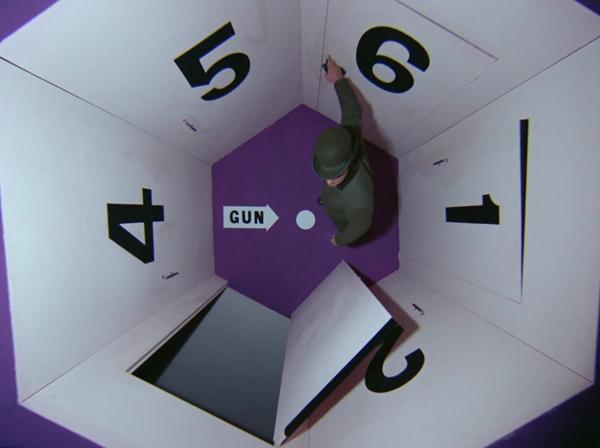 Steed moves on to a room with six doors around him, opening two at once such that the resultant gunfire cancels them out (“Very clever” says the manservant, to Bristow’s ire) and is granted a clip for the pistol. Next up are tunnels with guillotines ready to chop him, but they chop only his bowler. 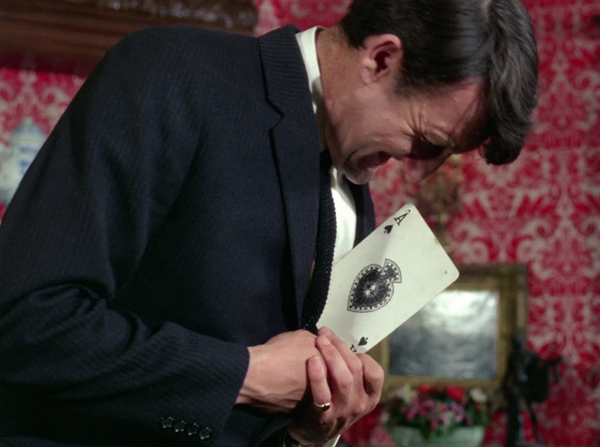 Steed’s solution to saving Tara while being accosted by “six assailants at six-second intervals”, with six bullets in his gun but only one live, is to ingeniously fire them all at the hourglass, breaking it and freeing Tara, to Bristow’s fury. When it comes to confronting his would-be nemesis, Steed deflects a killer playing card back at the mad mastermind, which ends up in his chest. 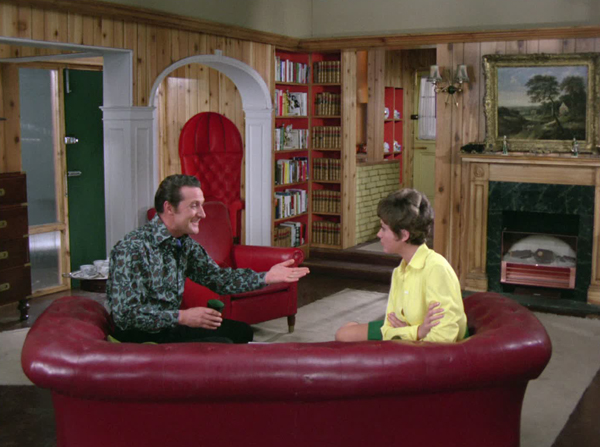 Tara: I don’t understand this game.

A very satisfying ordeal of Steed pitting his wits, then. Indeed, if the rest of the episode had been up to the standard of the final ten minutes, this would have been a contender for the best of the season. The coda has Steed teaching Tara “Steed-opoly”, in which he’s the only player allowed to throw the dice. 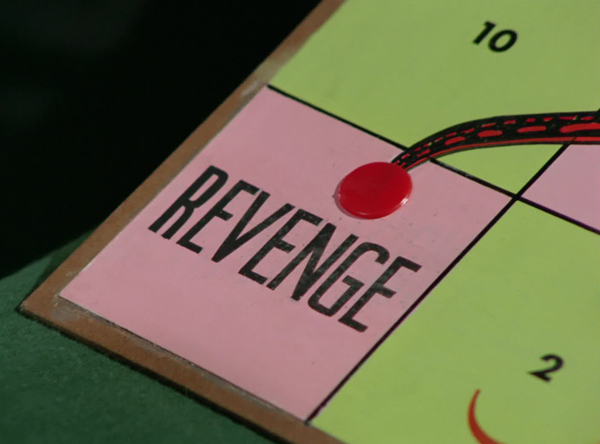 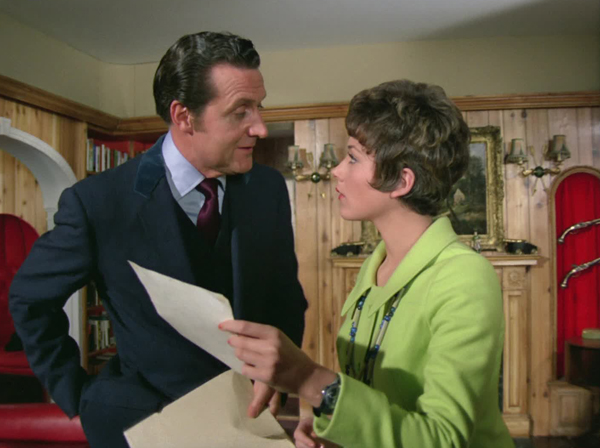 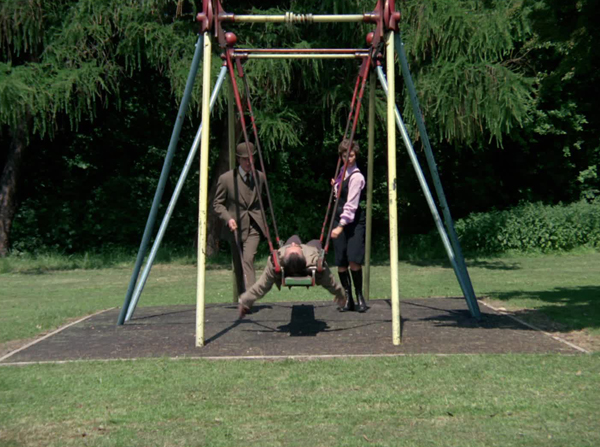 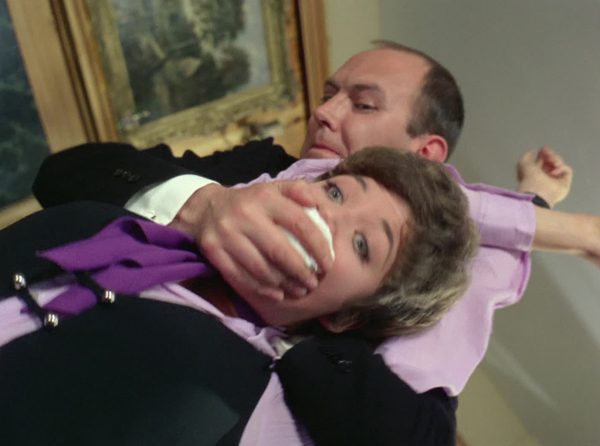 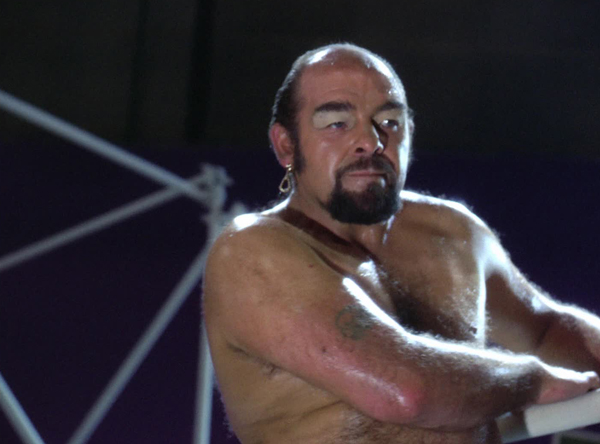 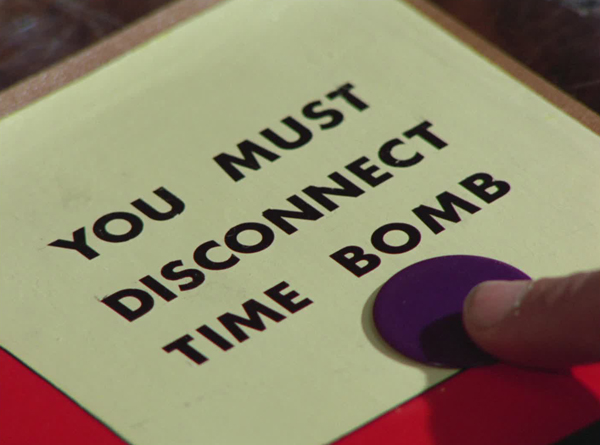 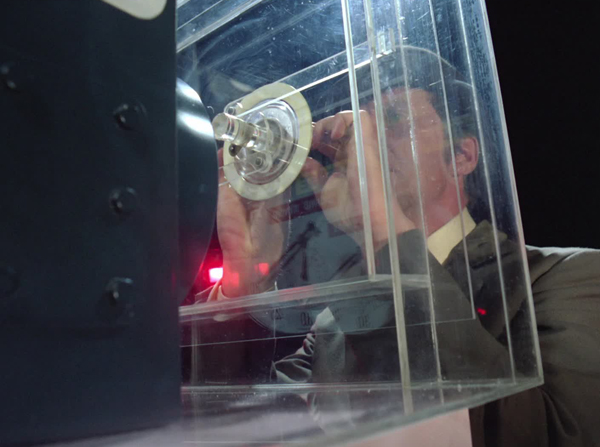 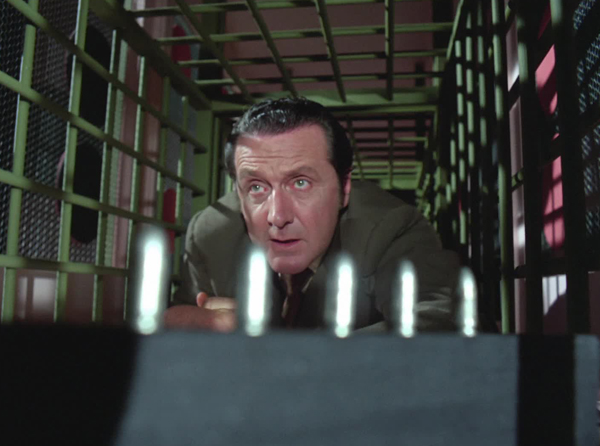 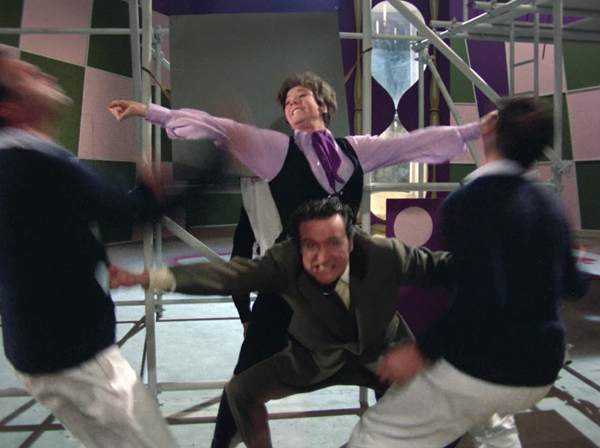 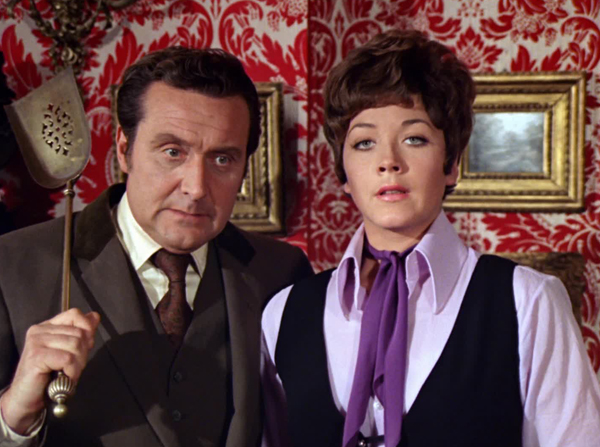