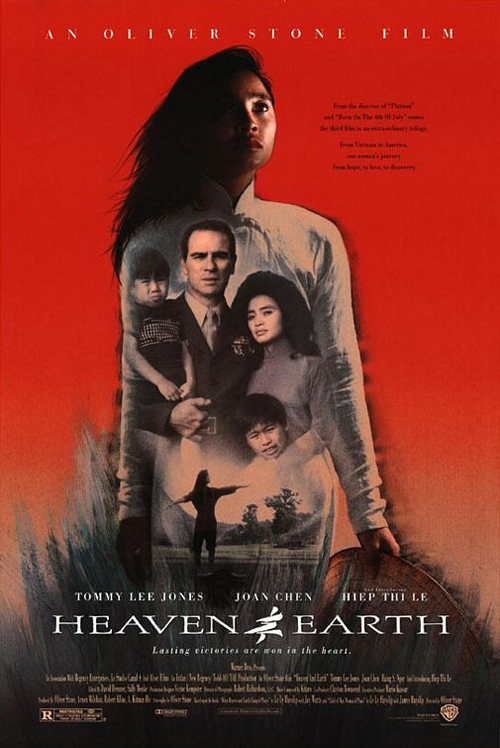 (SPOILERS) All credit to Oliver Stone for feeling a responsibility to portray the Vietnamese perspective of the Vietnam War, after so many depictions of the physical and mental traumas of GIs (even when inflicting suffering on the enemy) but from the evidence of the all but forgotten Heaven & Earth, the final part of his Vietnam trilogy, he wasn’t the guy to do it.

This is one of the few Stone films (also vaguely on the to do list is World Trade Centre) I hadn’t got round to seeing, interest dampened by the critics’ resounding negativity. Stone defiantly claims it as his favourite film, which is exactly the kind of behaviour you’d expect from him, but also indicative of why he was probably temperamentally wrong to take charge of the adaptation of the adaptation of Le Ly Hayslip’s (with Jay Wurts) memoirs When Heaven and Earth Change Places and Child of War, Woman of Peace. The director also adapted the books and handpicked Hiep Thi Le for the lead role (sadly, she died a couple of years ago).

Her performance is perhaps adequate, but the writing is such that the picture is never about her, merely her reaction to external forces. For much of the Vietnam section, Stone hampers any chance of immersive story telling through narrated ellipses that stodgily detail everything from the country’s history to the politics of her village. It doesn’t help either that he sets up the account with a depiction of her village as if they’re fantasy Gelflings just waiting for the terrible Skeksis to invade, with added treacle from Kitaro’s unchecked score.

There’s power here, in particular the depiction of those caught in the middle of both sides’ ruthlessness, but for the most part, the narrative is too broken to take hold. Rejected by her family and her village and with a child born from her employer (she gets the blame, naturally), Le Ly naturally seizes the opportunity of rescue when Steve Butler (Tommy Lee Jones) arrives on the scene. It’s only here, with someone with whom Stone can identify, that Heaven & Earth finds something approaching its feet, even if the depiction of Le Ly’s wonderment at American excess and opulence seems more based on recreating the contents of a ‘60s supermarket than real engagement with her viewpoint (this was, after all, the same director who insisted the Marlborough packets were the right shade in Platoon).

There’s nothing particular revelatory about a brutal man who can’t escape the urge to brutalise, as their “safe” life in America quickly deteriorates, but there are strong scenes here, even if they’re mostly down to Jones (his Thanksgiving tirade at his family – “So don’t expect Le to do handstands over your goddam turkey”). Ironically, though, they only emphasise her lack of agency, and that Stone’s in his element as a passionate, angry filmmaker, and accordingly needs protagonists who reflect that. Without them, he’s stranded. So it is that the strongest scene in the picture has Steve pointing a gun at her before confessing his nightmarish Black Ops existence (“The more I killed, the more they gave me to kill”), culminating in an attempt to top himself.

How authentic Le Ly’s consultation with the Buddhist monk who recommends she reconciles with Steve or they will have to work things out in the next life is, I don’t know (it seems a bit “Stone” in its lack of finesse), but once her husband has committed suicide, and we segue to a successful older Le Ly’s return to Vietnam with her sons, the limits of Hiep’s abilities become more unflatteringly evident (and the hair department can’t really compensate). Again, though, the blame for this is fundamentally at Stone’s door. There’s only ever a sense of the character being robotically manoeuvred from point A to point B to point C by her writer-director.

There’s strong support from The Killing Fields’ Haing S. Ngor as Le Ly’s father and Joan Chen as her toothless mother, but finally seeing the film simply confirms why it went largely ignored. It’s surely not a coincidence that this is the point where Stone lost his footing as a filmmaker, after a five-year spell where he could seemingly do no wrong. It’s as if he’d run out of things to get angry about, and when he did (Natural Born Killers), the results seemed artificially steroidal. Perhaps if his Mai Lai massacre film had got off the ground we’d have seen something of the old Stone, but there’s also the sense from Heaven & Earth that he’d already said everything he had to say about Nam.