In alphabetical order, he was clubbed, poisoned, shot, spiked, stabbed, strangled and suffocated. And his eardrums are damaged. 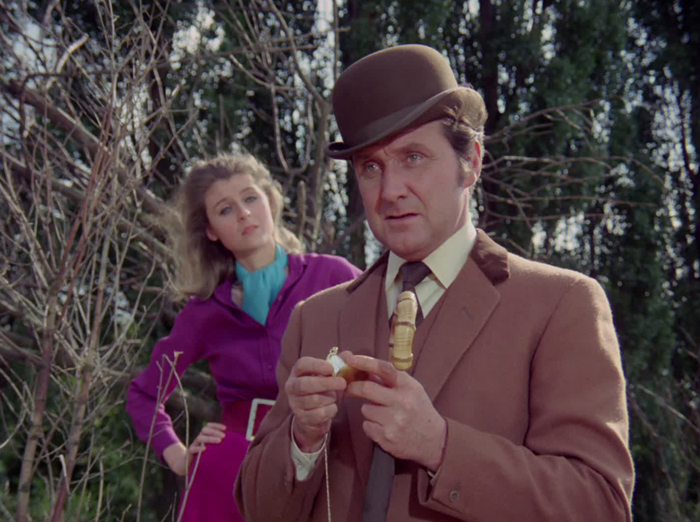 One of the series’ infrequent “Steed-gets-another-partner-for-an-episode” outings (see also 4.19: The Girl from Auntie). And while on the plus side, Lady Diana Forbes-Blakeney (Jennifer Croxton) mercifully avoids the overt flirtation of Tara, she also lacks the sense of fun and energy Thorson brings to her role. As a result, Lady Diana only ever seems like a stand-in, marking time, where other eccentric one-offs (5.19: Dead Man’s Treasure, 3.24: The Charmers) were more indelible. 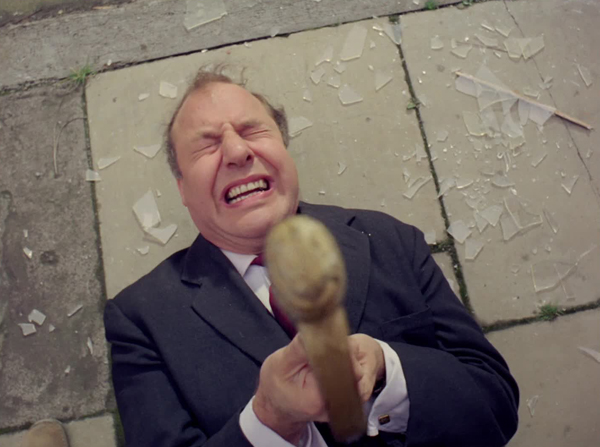 Steed: Why didn’t he wait?
Mother: Why can’t any of them wait?

Killer – for a series that prides itself on amusing titles, this one is unforgivably bland – works surprisingly well dramatically, given how thin and repetitive it is. A man name Remak is murdering intelligence agents, all of whom proceed to face their killer alone after meeting the same “dying” contact Paxton (Harry Towb, The Seeds of Death, Terror of the Autons). They head for a pub, The Pirate, in Lower Storpington, where Brinstead (William Franklyn, 4.13: Silent Dust) directs them to a nearby factory. Where Remak disposes of them. 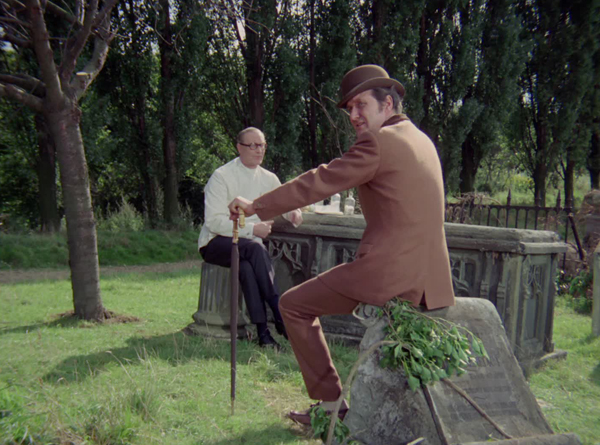 Clarke: In alphabetical order he was clubbed, poisoned, shot, spiked, stabbed, strangled and suffocated. And his eardrums are damaged.
Steed: His neck’s broken as well.

I’m not sure the means make a whole lot of sense as described by forensics man Clarke – Richard Wattis, The Chimes of Big Ben: one has the feeling Wattis ought to have appeared as an Avengers regular, but this was his only outing – since the succession of methods of death would surely be unlikely to leave the agent sufficiently alive to progress to each new one. And then there’s the miraculous clothes-mending machine. 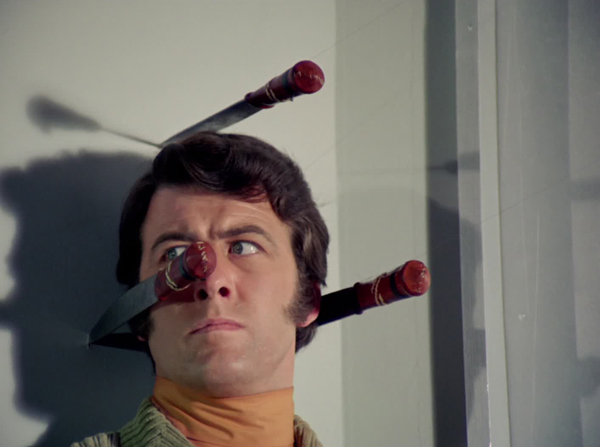 Steed: There’s a little disused graveyard to the north of Palmer’s Green, where a strange, mysterious body waits.
Lady Diana: Wrapped up in polythene. 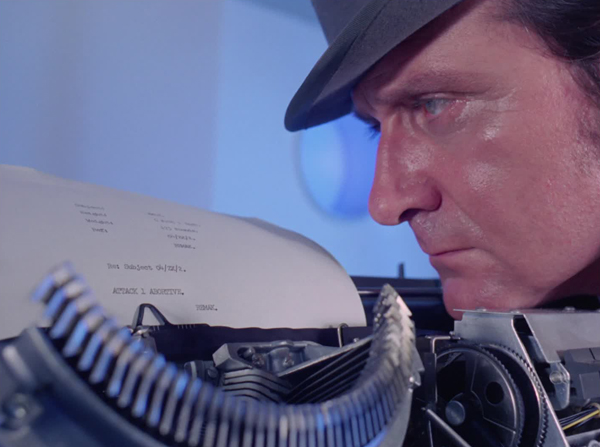 All told, Remak’s a remarkably efficient killer, until Steed arrives, and he’s revealed as a machine (as if anyone hadn’t realised in the teaser), a method to “mass produce murder”, or more specifically “to decimate your intelligence service” as Merridon (Grant Taylor, UFO) puts it. One that can be destroyed by typing a few instructions into it, this being the sixties (not so far from The General). 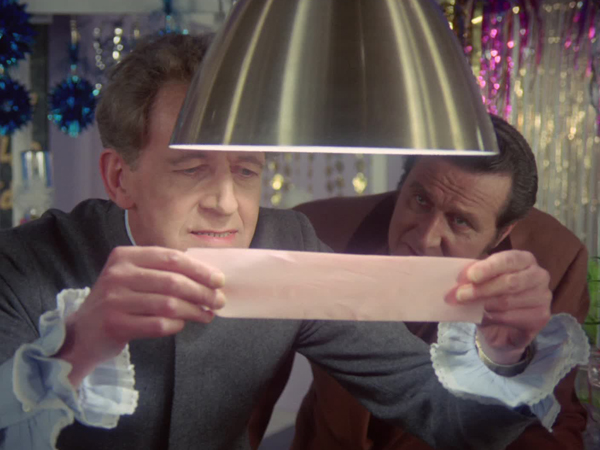 Freddie: Oh pink. Gorgeous. You know, I've a passion for pink myself.

Tony Williamson previously wrote the very amusing Wish You Were Here, but this episode is generally much less frivolous. A couple of brief visits to Fancy Frills Limited are as much as we get, in pursuit of the identity of the pink ribbon that tied Wilkington’s corpse. Freddie (Michael Ward, a recurring Carry On player) is magnificently camp, and his greeting to Steed is explosively funny (“Good afternoon, sir. I’m Freddie, packager extraordinary”). 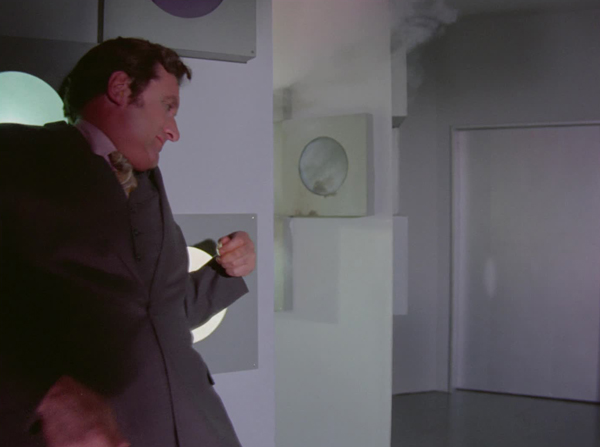 Steed: How did you get in?
Lady Diana: Agent’s Manual, Section 3, Paragraph 4. Always go in through a skylight.

Director Cliff Owen services the action commendably in his only contribution to the series (he also called the shots on The Wrong Arm of the Law, the Morecambe and Wise big screen outings and several ‘70s sex comedies); Trancer’s escape in the teaser is extremely well put together, while Lady Diana later has a convincing tumble with Brinstead (where she comes out best after getting hold of a samurai sword), and Steed’s later navigation of the various death traps is also a lot of fun, particularly when he comes across Lady Diana (the obstacles recall other deadly courses such as Blake’s 7’s Games, and as Shallow Like Us notes, Death to the Daleks). 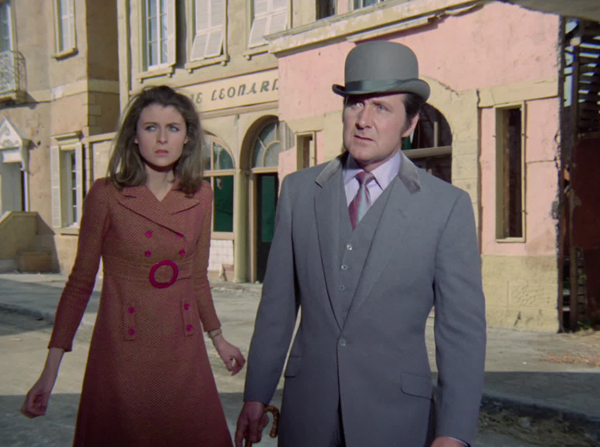 That said, the earlier means of doing for Brinstead with an oncoming cart is about as convincing as it was when used in 5.12: The Superlative Seven (as less than convincing behaviour goes, Paxton merely knocking Steed out at one point doesn’t seem to have been very wise, since of course he comes back for more; notably, Paxton’s location is explicitly written in as a backlot, enabling unadorned Elstree filming). 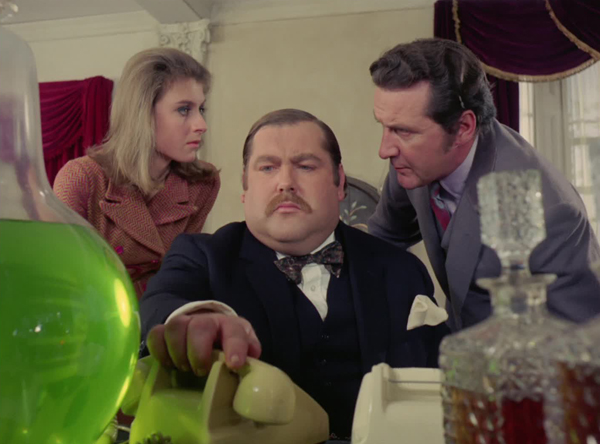 Steed: The Orient? Maybe you could teach me a thing or two.
Lady Diana: I doubt that very much.

Some fans have expressed wistfulness about what might have been, had Lady Diana been a regular rather than Tara. It’s true that Croxton plays the relationship more as an equal per the previous two partners, but I don’t detect much chemistry here, and she also seems more than a little awkward in her delivery at times. In terms of the character’s skillset, we learn she just spent eighteen months undercover organising agents in the Orient, which I guess explains her racist Chinese impression later in the episode. 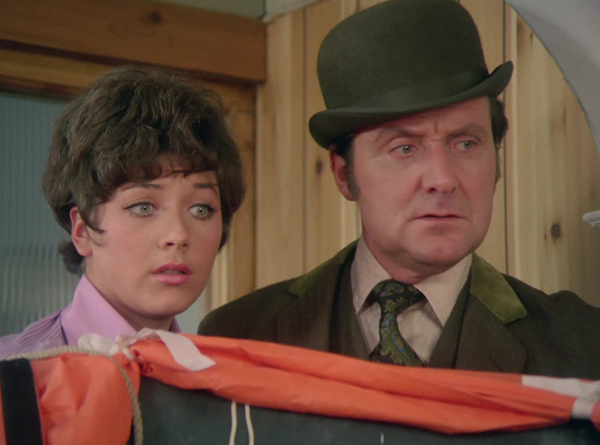 Steed: Send me a postcard.
Tara: Every hour and on the hour.

As for Tara, who has been on holiday via a pink and purple pass, those dubious about Thorson need only look at the previous episode to see how winning – and funny – she can be. The continual bugbear of the relationship with Steed is not that she’s his less-experienced junior, it’s the playing up of her moon-eyed besottedness. Which is all we see from her here (if she’s that crazy about him, why does she even go on holiday?) The coda is, however, pretty good, with a gift for Steed in a tiny box; it holds an inflatable dinghy that proceeds to fill his apartment, the instructions on how to deflate it left far across the room. 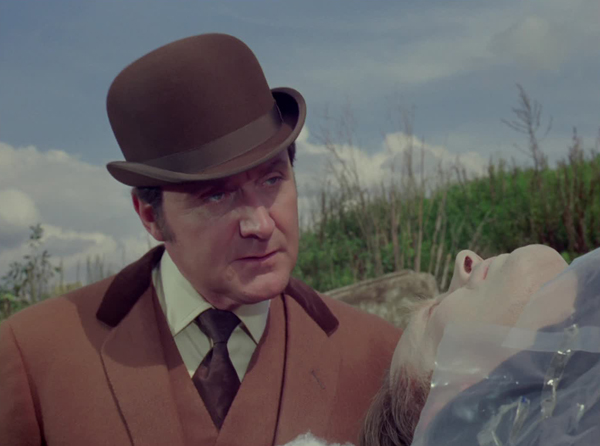 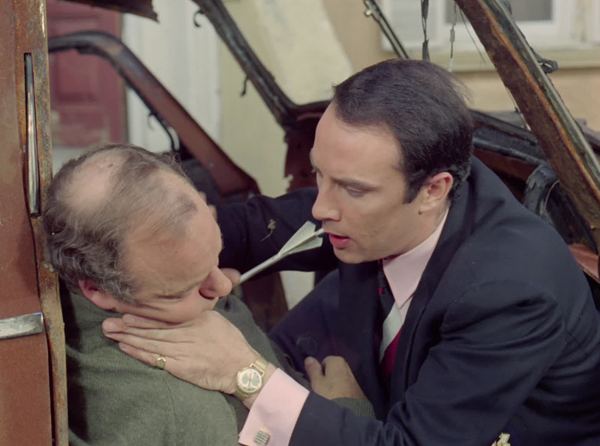 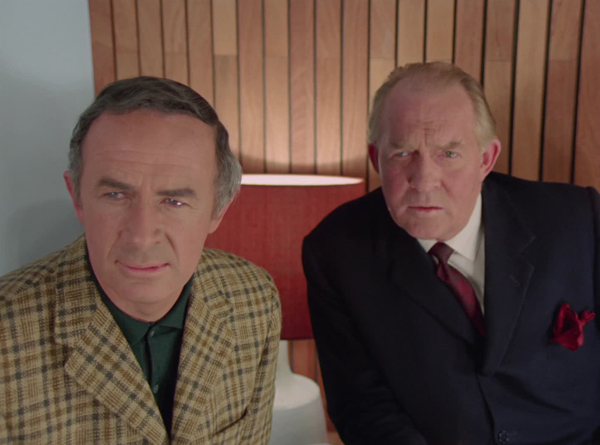 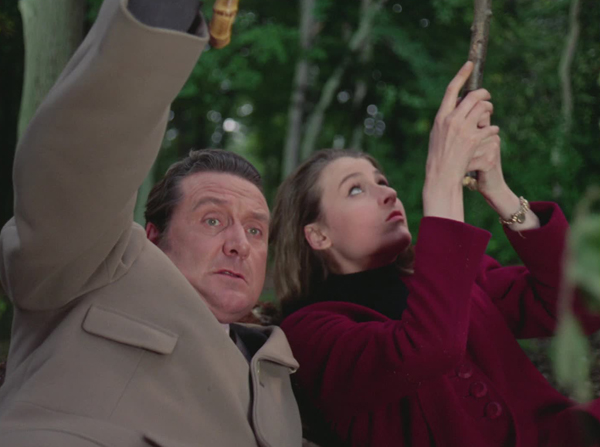 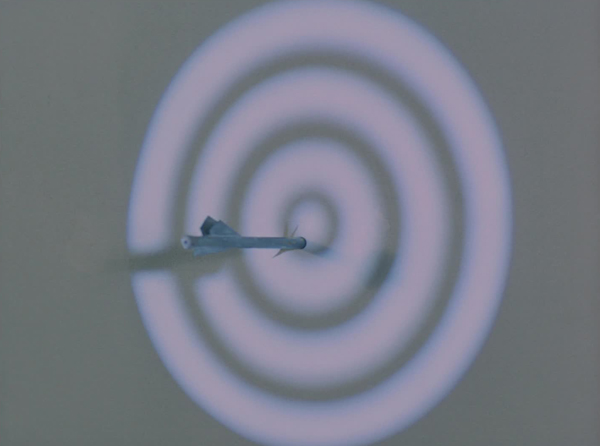 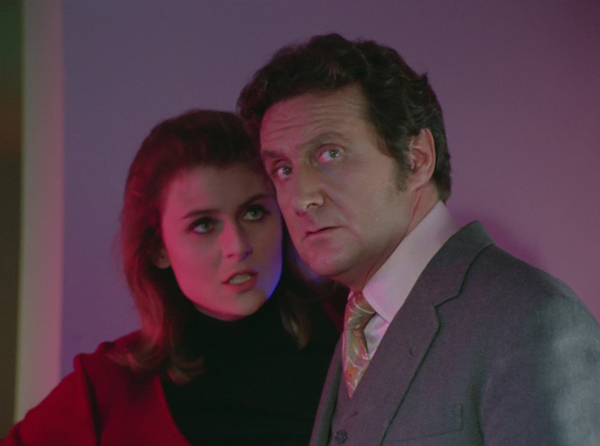 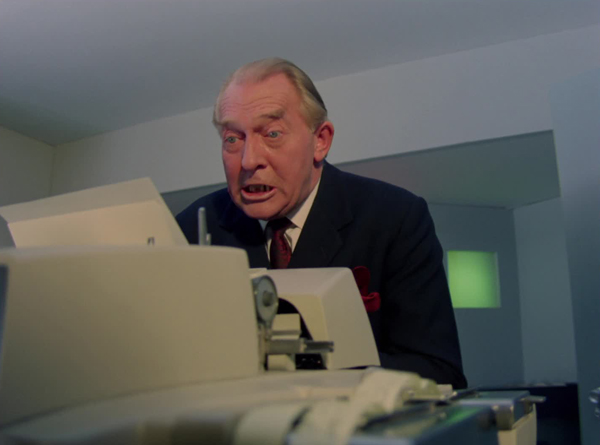 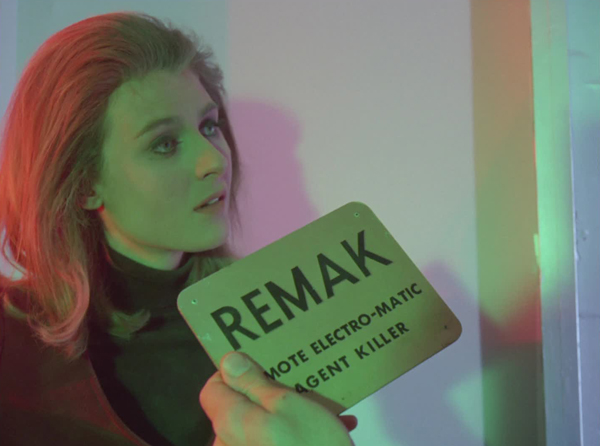 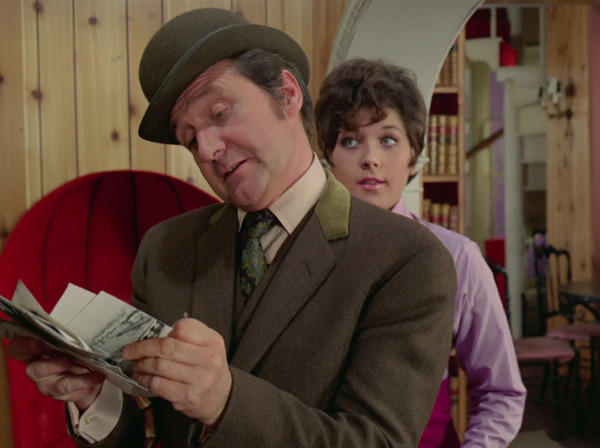