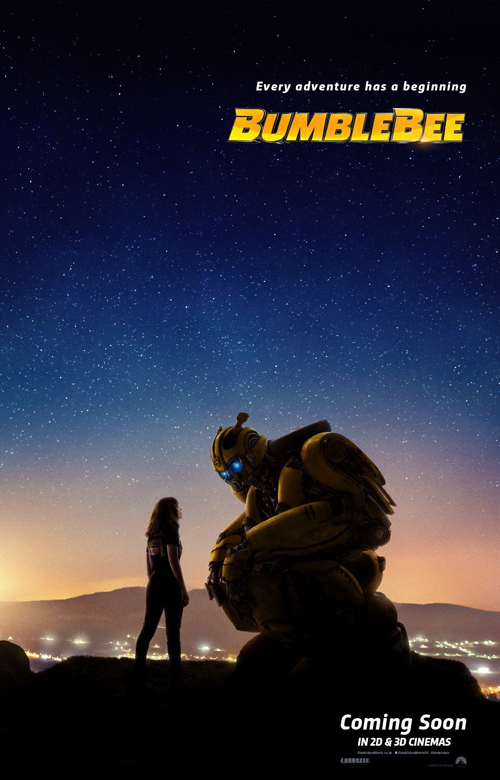 (SPOILERS) Bumblebee is by some distance the best Transformers movie, simply by dint of having a smattering of heart (one might argue the first Shia LaBeouf one also does, and it’s certainly significantly better than the others, but it’s still a soulless Michael Bay “machine”). Laika VP and director Travis Knight brings personality to a series that has traditionally consisted of shamelessly selling product, by way of a nostalgia piece that nods to the likes of Herbie (the original), The Iron Giant and even Robocop.

In the case of the latter, that’s more in relation to style of robotic movement and the plot putting the title character up against it, as Bumblebee flees Cybertron, pursued by the Decepticons, and lands on Earth in 1987, where he’s instantly unfortunate enough to come under attack from John Cena and his paintballing government co-agents. Cena’s character is a staple of this kind of ‘80s fare, the discerning but dutiful government operative who ultimately learns to respect his quarry, but the principle relationship is between the Autobot and Hailee Steinfeld’s grease monkey teen Charlie, who only has eyes for engines and as is delighted to discover Bumblebee – whom she names, B-127 being fairly formal, and he being unable to inform her of this himself – disguised as a VW Beetle. Alas for Bumblebee, his voice box is damaged, along with his memories, meaning he spends significant time in a meek, mild and sometimes mischievous form, more prone to hiding or cowering than attacking; he’s your alien fish out of water, in the manner of ALF (visually referenced) or Johnny Five. Or the Iron Giant.

Knight’s very good with the robot/teen friendship, and also handles the budding friendship/not quite romance between Charlie and Jorge Lendeborg Jr’s Memo with easy charm. He’s clearly most enthused by the music of the era, though, while referencing similarly pop-tastic period movies (Simple Minds and The Breakfast Club repeatedly come up, in particular, Judd Nelson’s fist pump). Charlie’s shall-we-say-eclectic taste in music runs the gamut from The Smiths to Rick Astley, both of which elicit Bumblebee to spit the cassettes from his player in disgust (quite right too: the tracks in question are Girlfriend in a Coma and Never Gonna Give You Up). Writer Christina Hodson (the upcoming Birds of Prey) makes sure to include staples of such misfit tales, such as the robot, left alone, wreaking havoc in the family home (much to the horror of Charlie’s returning mum, Californication’s Pamela Adlon).

John Ortiz is typically irritating as an ambitious scientist astounded by the Decepticons’ ability to come up with an infant Internet, while the Decepticons themselves have an effectively PG means of killing humans (liquification, with no messy blood attached). I don’t think Bumblebee is quite the miracle some reviews have suggested, as I suspect the simple fact that it wasn’t the hideous sensory assault of previous franchise entries made it seem disproportionately better than it is, but it’s quite sweet, has just enough Transformers lore to keep the fans happy – trad designs rather than the over-fussy Bay ones, Bumblebee meeting up with Optimus Prime at the end – and even the occasional burst of wit (Stephen Schneider, as Adlon’s nervous boyfriend confesses to Cena “I stole a box of Mallomars once”: “Yeah, we know” deadpans Cena in response).