They were worse than philistines. They were villainstines! 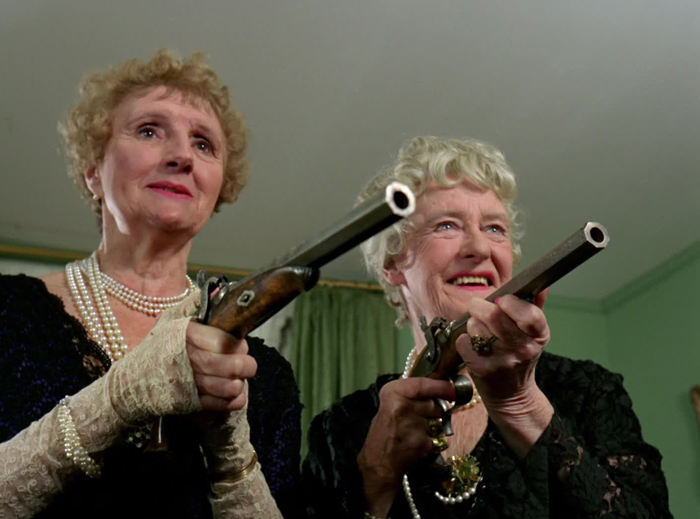 The Avengers
6.30: Homicide and Old Lace

It seems Homicide and Old Lace (originally titled Tall Story) generally gets the short straw as the most vilified Avengers episode, but as with the much-decried Invasion of the Earthmen, I was able to find quite a bit to enjoy here. Even the rather deathless main body of the piece, a salvaging of a sort of The Great Great Great Britain Crime, can boast Gerald Harper (2.4: Death Dispatch, 4.15: The Hour That Never Was) as an idiot. 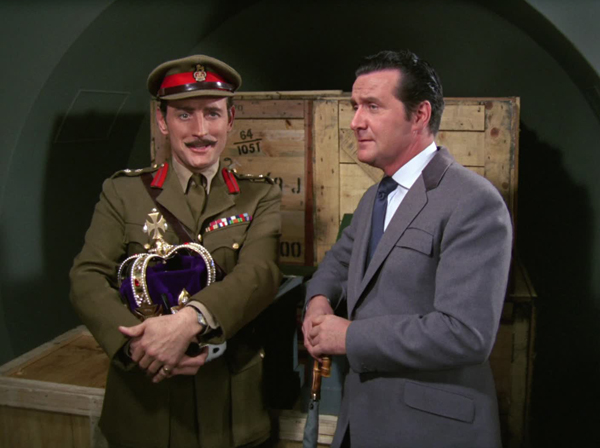 Mother: I put the word out – find out all you can about Intercrime.
Harriet: That’s seven words.

Mainly, though, I just enjoyed the interplay of Mother and his aunts, Harriet (Joyce Carey) and Georgina (Mary Merrall, 4.19: The Girl from Auntie) as he recounts the bodge up of Terrance Dicks and Malcolm Hulke’s teleplay with a few bits of 5.3: The Bird Who Knew Too Much, 5.1: The Fear Merchants, 5.22: Murdersville and bizarrely unstoppable Christopher Lee from 5.10: Never, Never Say Die (eliciting one of the best Mother explanations: “Finally, the attacker made a fatal mistake. He made Steed very angry”). I was put in mind of Woody Allen’s What’s Up Tiger Lilly from a few years prior, in which he fiddled with footage from Japanese movie Key of Keys to his own humorous ends. 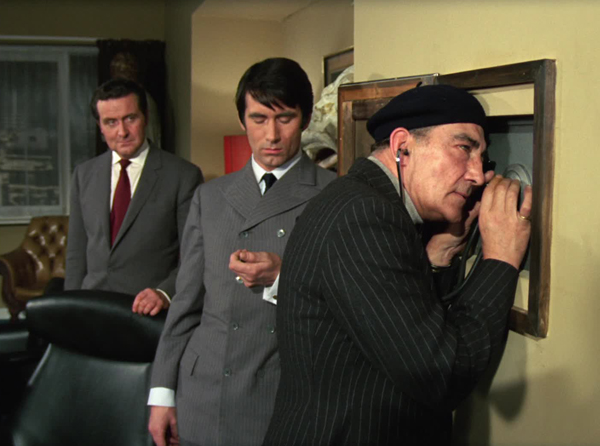 In Bowler Hats and Kinky Boots, Michael Richardson has it that the Dicks and Hulke script was overly complicated with too many characters, coming in at 63 minutes in its assembly cut. What we glean has the basics of a solid premise, though: a plan by Intercrime (a sequel of sorts to that Season 2 story) to steal all the national treasures when they’re amassed in one warehouse in the event of (falsely alerted) war. 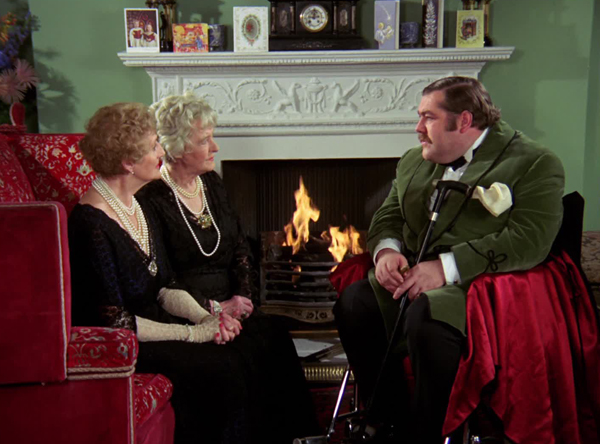 Harriet: Just a minute. You made Tara King a blonde. I’ve seen her, she’s a brunette.
Georgina: That’s right.
Mother: Now look here, aunts. This is my story. And if I wish to make Tara King sky blue pink, I will.
Georgina: Ah, you’re so forceful.

Mother’s sleights of storytelling meet with a consistently critical, loophole-spotting audience. Following the unlikely survival of Freddie Cartwright (Donald Pickering, 5.6: The Winged Avenger), having been shot up and buried, he’s gunned down: “Well, well, well. Forgot his bulletproof vest, eh?” observes Harriet. “It can happen” replies Mother. They’re also particularly dismissive of Harper’s Colonel Corf: “Did he marry into an important family? Is that how he got the job?”) 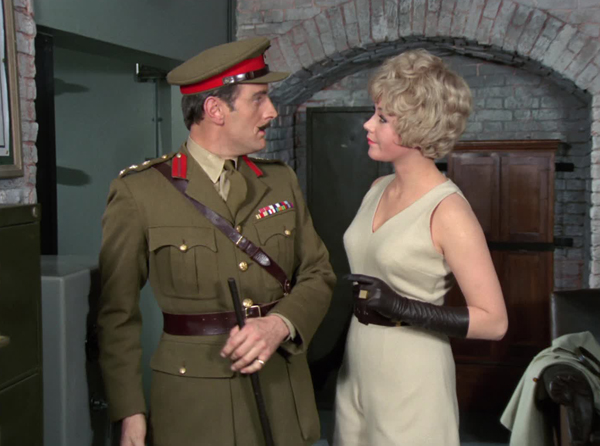 Much of the main story is rather drab, but there are occasional highlights. Intercrime boss Dunbar’s (Keith Baxter) delivery of “Mr Steed, you should be dead” is winning. Steed, who is undercover as a top criminal, dismisses the first (French) safecracker with “He looks like a criminal!” There’s a frankly bizarre overdub when “brilliant gallant blonde” Tara escapes and a secretary goes flying with the cry of “Ahhh! You’ve laddered my stockings!” 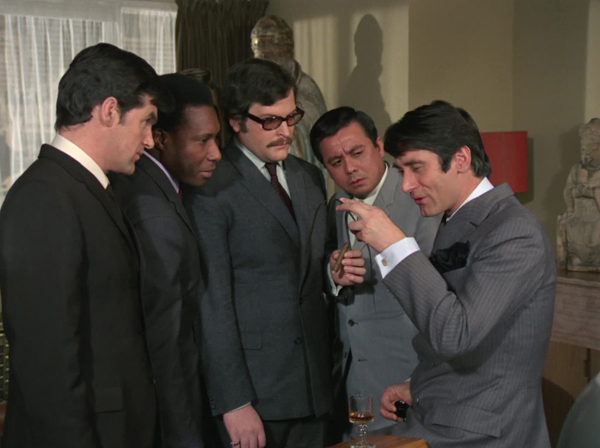 Mother: They were worse than philistines. They were villainstines!

I’m not sure Steed’s request for £100k to come along on the job is entirely convincing when he’s already (in theory) pocketed $785k in diamonds from his earlier theft, but still. There’s a nice edit of punching villains in the main story with the setting down of cups on saucers in the framing one (it’s the little things). As for the wrap up, the plea, “Couldn’t we have a downbeat ending for once?” meets with the response that Steed sprained his thumb and, concerning his partner, “The shock turned her brunette”. 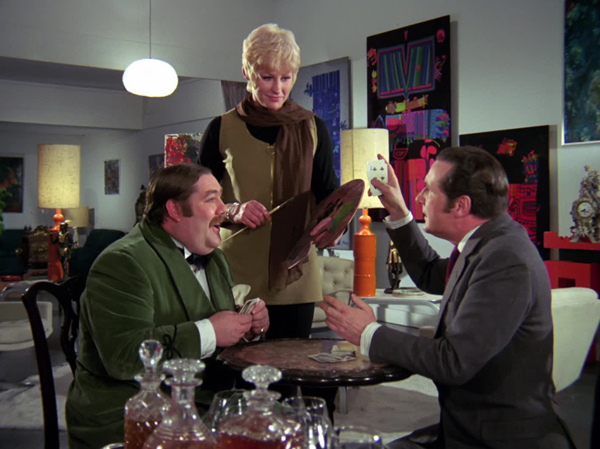 So there’s enough here to make the proceedings mildly diverting, but it’s an insurmountable problem that the menu item is at best perfunctory. The coda has Mother using Rhonda as a ventriloquist’s dummy when Steed complains that it bothers him that she never speaks (“Rhonda’s lost her voice”), which elicits what appears to be genuine laughter on the part of Parker. 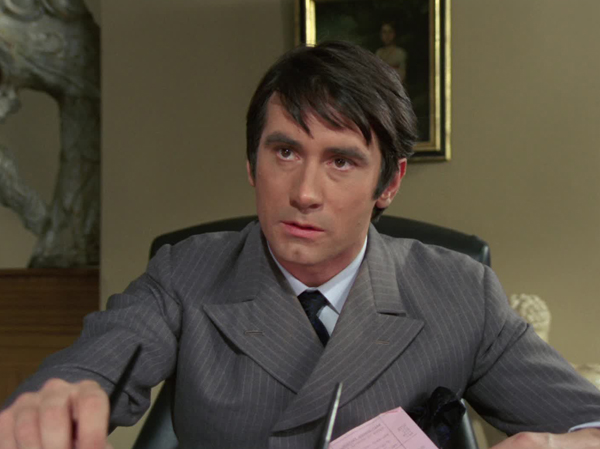 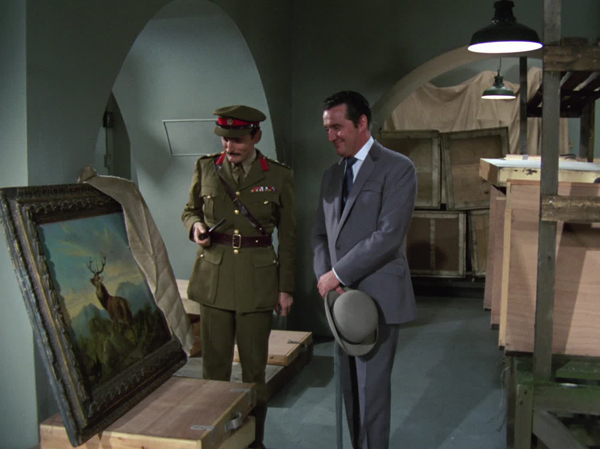 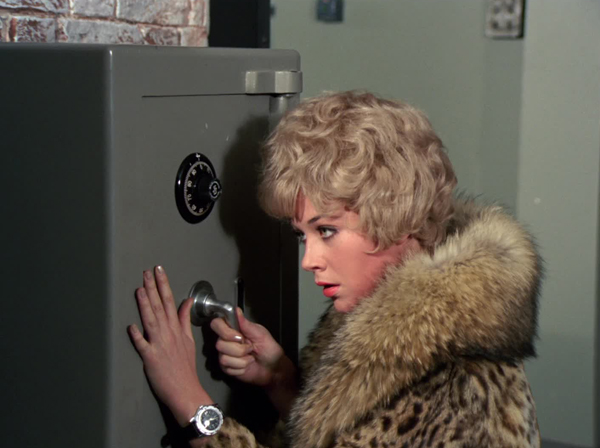 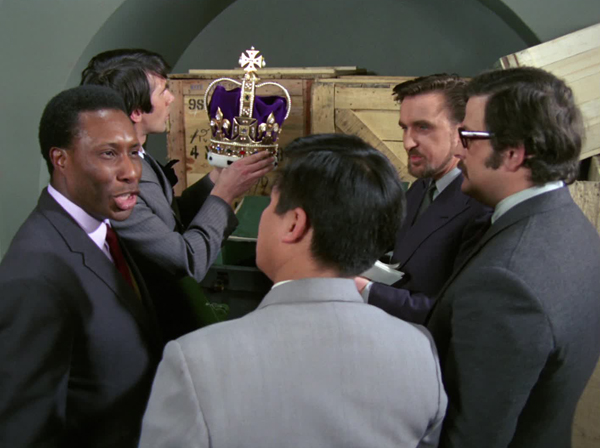 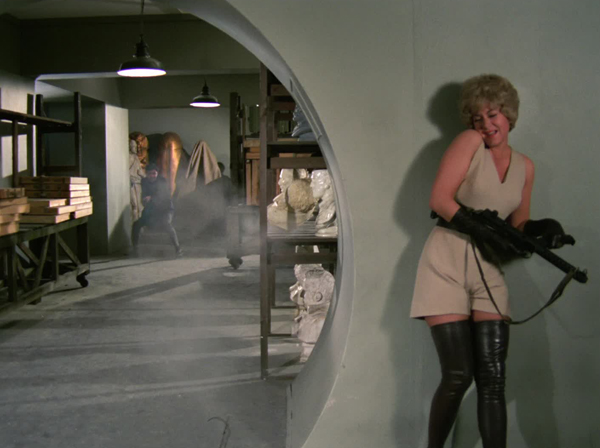 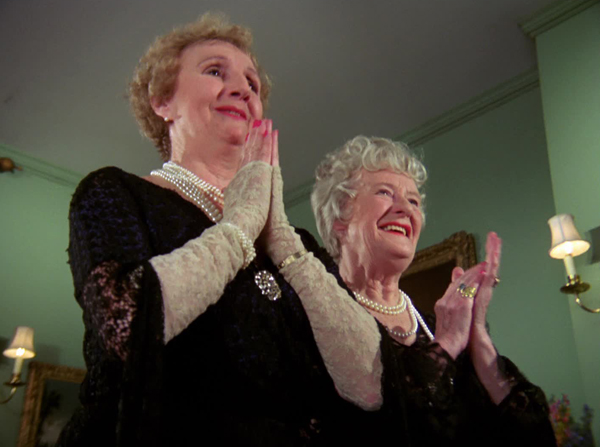