A squad of dirty Bosch bastards were about to have a sausage party, but I shot them. 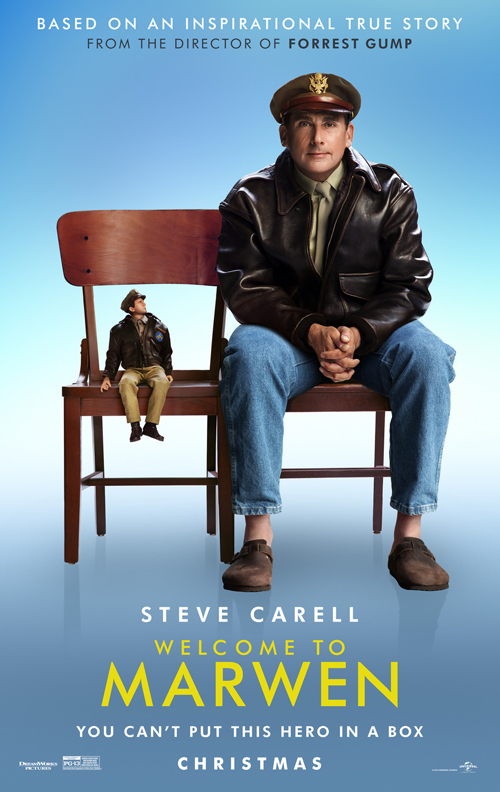 (SPOILERS) The latest flop from Robert Zemeckis isn’t, fortunately, as dramatically inert as Allied (surely one of the most soporific films of the twenty-first century) but it’s just as guided by its director’s curious obsession – having got over his hideous motion-capture phase – with choosing material on the basis of whatever effects innovations he can bring to the table, whether they merit it or not. If you’re working by that methodology, it shouldn’t be a surprise, as evidenced by Welcome to Marwen, when your storytelling suffers, again and again and again.

Which is to say, while both Flight and The Walk had their points of merit, Zemeckis’ main attraction to them is clear as day (the simulated crash and the simulated high wire work), and whatever the calibre of the performers, the storytelling, even if by dint of resting on foregrounded clichés, suffers when those elements aren’t in the frame. In Allied, we were treated to weird waxy de-aging of Brad Pitt, for no clear reason, but it was at least more transfixing than the love story. And here, the effects work is pretty damn innovative, through blending CGI and motion capture (essentially using the performers’ actual eyes on virtual models), but it’s in aid of a Walter Mitty-like existence of the main character that flounders in maudlin indulgence and tragic delusion, afflictions that just aren’t that striking. Plus, as you’d expect, Zemeckis’ “real world” is much too Hollywood to form an effective contrast to Mark Hogancamp’s escapist urges.

Doubtless Bob and co-writer Caroline Thompson (Edward Scissorhands, City of Ember) thought having the main person in Mark’s life be his mother would test audience’s already tentative patience with a withdrawn middle-aged man playing with dolls, and doubtless they thought it would be easier to characterise his depiction of the hero of his model village Marwen (Hogie, also Carell) as battling Nazis if the attackers who left him in the state where he decided to embark on this therapeutic project were Neo-Nazis themselves (they weren’t, even though they were engaging in a hate crime). And doubtless they thought it would be more viewer friendly to downplay his pre-attack alcoholism and up his creativity (he wasn’t a published comic book artist), turn him into a loveable local eccentric, and give him romantic attachments (both spurned and reciprocated). Oh, and an addiction to painkillers and thus a cathartic climax where he overcomes them. Doubtless they thought all these bolstered elements would help to make Welcome to Marwen a recognisably appealing mainstream movie of a certain type (the sympathetic but unrecognised creative genius with an engaging fantasy life we can root for – yes, the Walter Mitty thing). But very little of it sticks.

Steve Carrell’s offers a decent stab at making Hogancamp a traumatised oddball, and one can’t understate his mastery of the dying art of cigarette acting (hanging from his lip just so effortlessly). But while Zemeckis has the technique down for depicting Marwen, there’s very little in the way of verve to this town of make believe, its denizens coming across like an uninspired approximation of Joe Dante’s Small Soldiers at times, but more often making Mark out to be an aspirational Russ Meyer wannabe (the picture at times seems to be trying much too hard to underline that, even though Mark wears women’s shoes, “I do love dames”). Indeed, at times there’s a scale of uncomprehending interaction with women on his part – not batting an eyelid when he tells Leslie Mann that one of his characters is inspired by “the Backdoor Bodacious Babes series” – that isn’t quiteTravis Bickle taking Cybill Shepherd to a porn cinema but is on the same descending scale.

The result is a movie that’s simultaneously odd and anodyne. Welcome to Marwen embraces tepid formula storytelling in the service of a true-life incident that probably simply lacks enough juice to turn into a movie – Zemeckis leading with bringing the models to life – but doesn’t work out how to make either world appeal sufficiently to the audience.