I'm like a cat who makes tables. And I'm gonna build was a great big table. 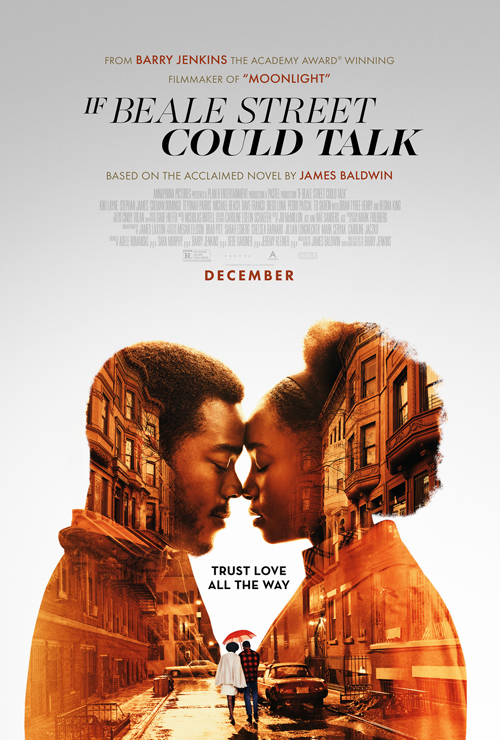 (SPOILERS) Barry Jenkins’ follow up to Moonlight is the kind of fare usually lapped up by the awards circuit. Which isn’t to suggest Jenkins was necessarily setting out to make it a double on Oscar night, but rather that If Beale Street Could Talk is achingly self-conscious in its awareness of its worth and responsibility. You can tell, right from the off and the over explanation of the opening titles – of how James Baldwin intended Beale Street to represent the universality of the black American experience – that this is going to be a little-seen stodge, the kind of artful, self-involved project a director often takes on after Oscar plaudits (see Soderbergh and Kafka).

It’s thus no surprise that Beale Street was financed by the imperilled (until daddy helped out with credit lines) Annapurna, given to politically virtuous but commercially dubious fare. Beale Street is beautifully made – although, such is the tonal dissonance, you’d be forgiven for thinking this was set in the 50s rather than the 70s – and as with Moonlight, Jenkins at his most accomplished conjures an almost Malick-esque dreamy, woozy melding of music, narration and image in his depiction of young couple KiKi Layne and Stephan James’ romance and tribulations in period New York (we also saw this tendency in Moonlight, such as the sequence where Chiron is taught to swim). And the performances are first rate, particularly Layne’s, with whom I wasn’t familiar.

But too often, Beale Street feels as if it’s preaching from a bible rather than telling a story, be that in the leading by the nose, sometimes didactic narration (nevertheless thoughtfully delivered by Layne) or the dropping in of period stills to underline the point, or the means-to-an-end supporting characters (benign Jewish liberal landlord, racist cop making it his mission to send James down and succeeding).

And because Beale Street’s repose position is one of twilight recollections, it rarely picks up enough energy to truly engross. There’s an entertaining, if OTT, sequence where Layne’s family – Regina King as mom, Colman Domingo as dad, Ernestine Rivers as her politically aware sister – invite the family of the incarcerated James round to tell them about Layne’s pregnancy. The ensuing fireworks, mostly particularly ignited by Aunjanue Ellis’ hell-and-damnation mother, are attention grabbing, if unsubtle, while a later sequence of King visiting the woman who accused James of rape is nothing if not overwrought (almost as if Jenkins is only able to deliver extreme tonal contrasts).

I wasn’t the greatest fan of Moonlight – it was fine, but seemed to have been embraced by critics as much for preaching the Gospel According to Woke as it was for its perceived merits. If Beale Street Could Talk exerts the diligence and reverence of a student exercise and so comes across as almost sepulchral in its ponderous pseudo poetry. Which is the kind of charge you can level at Malick too (of which, he recently stands guilty as charged).