My advice? Take it to Channel 4. They’ll eat this shit up. 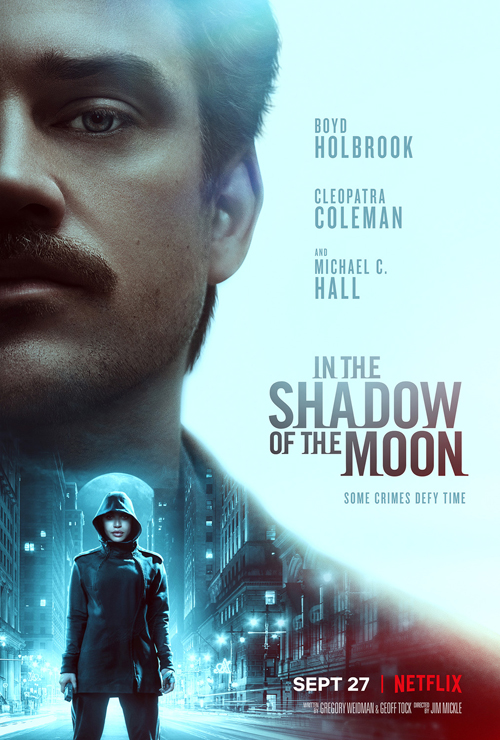 (SPOILERS) One time, it would be satisfying if the main protagonist in one of these Grandfather Paradox constructions had done with the inherent inescapability of it all and expressly set out to blow the bloody doors off. If Boyd Holbrook’s increasingly bedraggled, hairpiece-hampered ex-cop, on realising that’s his granddaughter on the beach, the initiator of all these time-travel, would-you-kill Hitler murders – notably, there’s no discussion of whether this is a morally unconscionable mission, presumably because those responsible for kicking off the future civil war are hateful racists, so there shouldn’t be any debate on the matter – had just shot her in the head, that at least would have saved his younger, less chronologically-aware version from pushing her in front of a train.

Jim Mickle previously co-adapted novel Cold in July into an impressive thriller. Here, he’s working from a dog-eared and hackneyed screenplay from Gregory Weidman and Geoffrey Tock, one that becomes less and less interesting as it progresses. In the Shadow of the Moon opens with a glimpse of the conflagration that kicks off war in 2024, then flashes back to 1988, with some icky deaths suggestive of an episode of Fringe. Throw in disbelieving cop banter from Holbrook and Bokeem Woodbine (playing a good guy for a change, so inevitably he gets offed about halfway through) and you have something not a million miles in tone from The Hidden. That soon dissipates, however, and we end up with a picture much closer to Predestination in its reliance on paradoxes as a plot engine.

In the Shadow of the Moon isn’t even prepared to dissect those paradoxes, content to think the very fact of them is clever enough in itself (quite the reverse, they tend to be a lazy, creatively bereft way of telling a story). At one point, Rudi Dharmalingam’s physicist tells Holbrook’s Locke “Time travel’s complicated. Hard even for me to wrap my head around”. Which, presumably, should be enough for us, what with talk of “chronal isotopes” that can be used to, highly plausibly, “trigger a dissolution from a future point in time” and the availing of super moons to travel back in time in nine-year leaps. Arbitrarily rules are piled on to justify the conceit, making the end result even more dissatisfying; told that by Locke that he kills her 27 years earlier, Rya (Cleopatra Coleman) concludes “Then it already happened. Time travel is a one-way trip. I can’t go back until my mission is completed”.

It’s a shame. There’s always a sinking feeling with these kinds of time-travel yarns, that set up intriguing threads you just know will be wasted through the reveal of an underwhelming plot. Occasionally, such a template can be used fruitfully – Dark, also on Netflix, is a prime example, The Terminator another – but they key there is that they usually provide emotional investment rather than simply doubling down on the plot.

Holbrook, who somehow manages to look like Henry Cavill on the poster, is a decent actor, but never seems quite able to fill the screen, and the succession of facial appliances, particularly some scrappy, dog-eared beards, rather emphasise that he isn’t getting much support in making Locke’s thirty-year journey convincing. Michael C Hall, reuniting with Mickle, is thrown a rather thankless supporting turn, while Dharmalingam’s mad scientist might have been more interesting if he wasn’t an ungainly exposition device (and an ungainly exposition device dealing exposition in a standard clichéd scene where the protagonist escapes his bonds while keeping the villain talking).

In the Shadow of the Moon is by no means unwatchable, but Mickle has given it much more attention than it deserves, and by the time we’ve reached 2006, the picture is running on empty. Netflix can chalk up another promising director they’ve given carte blanche to who has duly come a cropper, following the likes of Duncan Jones, Jeremy Saulnier, Gareth Evans and Dan Gilroy. They may represent a home to projects that simply wouldn’t be financed by the big studios in the current landscape, but if all those projects turn out to be duds, no one’s winning out.